We hear how a Finish Airport got Martyn Lancaster at 50 years old and 4 stone over weight into Triathlon and from there to Aquabike and starting up March Triathlon Club.

How did I get into the wonderful World of triathlon?

After being in the Navy for 22 years and playing rugby all over the world my knees were showing the signs.  7 operations on them and I was told no running but cycling would be a good sport to improve the muscles to support the knee, but it wasn't a straight transition to tri from there.

I was then lucky to be in the right place at the right time. In 2001 the cruise industry was beginning to get big and they wanted Ex Royal Navy Instructors to go onto the ships to teach Fire Fighting, sea survival along side many other topics.

Great lifestyle but not a lot of opportunity to keep the fitness going, I started to gain weight, and with the stress of the job before I realised it I had put on four stone in weight.

I needed to change and find something to help me relax when on leave, I tried fishing which I enjoyed but that didn’t hit the mark, however it was great to spend time with my dad and youngest son.

My son took up running with the local athletics club which my parents had links to when they were younger. I also joined and just started to power walk/gently jog and really enjoyed it.  During my time as a forward and in the military I had always looked upon running as a chore!

While on my next working cruise my father sadly past away. The ship was in Russia, which made getting home very difficult so I stayed on the ship until it reached Finland. Why is this so important?  Well, while at the airport in Finland I started reading an article on triathlon. Still nothing too exciting.

Then the second link in the puzzle came up when an ex naval friend emailed me and his words still ring in my ears to this day. As he was rapidly heading towards his 50th birthday he wanted to set himself some goals. Firstly he will cycle from Lands end to John O’Groats, then he will row the Atlantic and he would complete an ironman triathlon. Wow, I thought he was the laziest guy in the navy, so this set the ball rolling in my mind. If he can do something like that then I can. 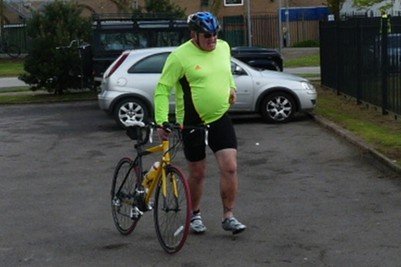 So upon touch down and while sorting out dad’s funeral, off I went to Halfords and bought a bike and signed up for the Brackley Triathlon in Northampton, which I really enjoyed, although the run took a while to complete. On returning to the ship I started to get in full training mode.  Being on a ship, the hardest part is the swimming as crew do not have access to the swimming pools, but I stuck with it and just enjoyed the whole process of training for three sports.

I returned home having signed up to complete another local triathlon, but as the doctor predicted the knee was having none of it. But I had found something that filled the void of rugby and I was determined to keep the training up but without the running.

And then into Aquabike..

My wife, or the logistic manager for team Lancaster (as she is fondly known) found an aquabike called the Owler in Kent. From there when I found a triathlon I liked the sound of, I emailed the events manager and requested I only do the aquabike, most were happy to provide this with me just walking over the finish time after the bike transition.

Over the years I have contacted many event organisers and asked them to run Aquabikes.  Most have been very supportive, the biggest dilemma seems to be how we finish after the bike leg. Most competitors want to be able to finish over the finish line, and not get a DNF on their finish time.

Since then and over the last five years Aquabikes are getting more and more popular, with several organisations including them into their event's schedule.

I now run a Face book group called Aquabike Racing and we have a membership of 291 people worldwide.

Aquabike still has a way to go, but there are now age group championships, age group qualifiers and it does feature in the GO TRI promotional material passed to new event orgaisers. Hopefully those are just the start of what will be an ever increasing push for Aquabike within our Triathlon communities in the next few years. The advantage to us all is that there is the ability to partake in the triathlon lifestyle when injury prevents running. The advantage to organisers is that it allows for more people to partake in events, which will help to grow the world of triathlon. 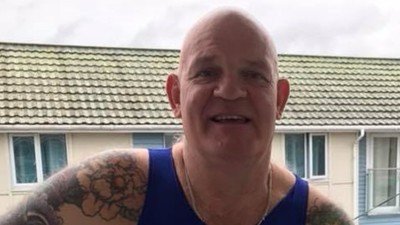 What does the future hold?

For 2019 I intend to concentrate on half Aquabikes with Cleveland Steelman being my main goal due to ship contracts. When not on ship I will be training with a great group of guys in my home town where are starting our own triathlon club, March Triathlon Club.

Beyond yet? Well, I’m four years off my 60 birthday and will have left ships.  My goal then is to become an age group competitor in Aquabike.