Swim, Bike and Rerun: Down Under for the Commonwealth Games

English, Scottish and Welsh athletes headed to the Gold Coast to compete in the 2018 Commonwealth Games, with paratriathlon included for the first time.

Having won five medals, including all three golds, in Glasgow four years earlier, Team England headed to Australia with high hopes of repeating that success.

With the men’s race set to take place in the afternoon, it was the female athletes who kicked off the triathlon action at the 2018 Commonwealth Games.

Jess Learmonth (ENG) led the athletes out of the 750m swim and was closely followed by Flora Duffy of Bermuda. It was this duo who would power on through the 20km bike leg to establish a commanding lead over the rest of the field.

As they headed out onto the 5km run, the pair had a lead of close to a minute. The Bermudan athlete, who had won the World Triathlon Series the previous year, had too much for Learmonth on the run as she established her lead early into the 5km and held it for victory. 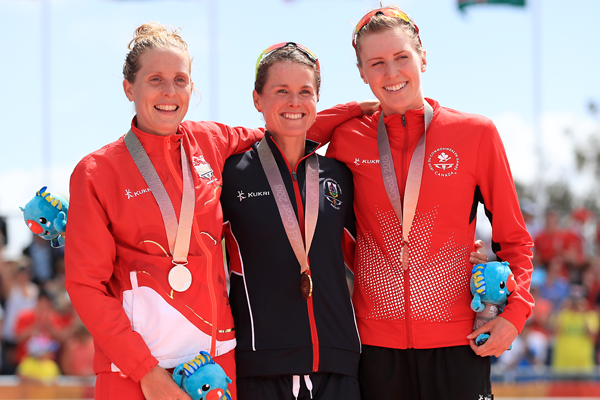 Chasing Learmonth and racing for a place on the podium were Joanna Brown (CAN) and 2016 Olympic bronze medallist Vicky Holland (ENG). Brown just had the speed at the end to take third place by four seconds and claim the bronze medal.

By the time the men’s race started in the afternoon, the sunshine of the Gold Coast had been replaced by a fierce storm.

In the choppy water, defending champion Alistair Brownlee soon made his mark by getting to the front of the swim group leading into T1.

Jonathan Brownlee (ENG) Henri Schoeman (RSA), Matthew Hauser (AUS) and Marc Austin (SCO) made up the gap on him and New Zealand’s Tayler Reid to establish a strong group leading the charge on the bike leg.

It would prove to be Schoeman who would make the break for it by the time the athletes got their trainers on for the final leg of the race.

Home favourite Jacob Birtwhistle (AUS), having made up ground on the lead group and with 2.5km to go, was hunting down the front-runners in search of a medal. 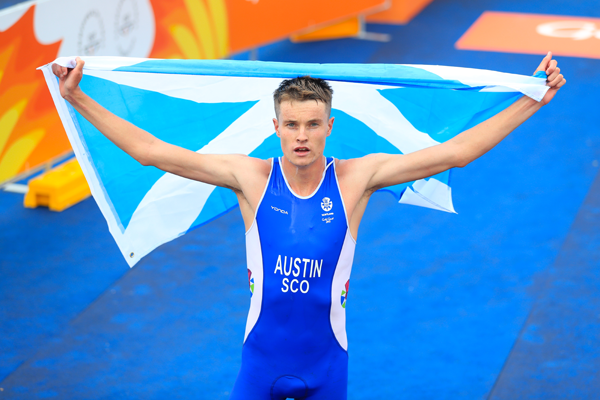 Above: Marc Austin took the silver medal for Scotland in the men's race

Recording the fastest run time, he made it into second place to win the hosts their first medal of the Games. Austin also gained ground and pushed through in the closing moments to secure himself and Scotland the bronze medal.

After the race, Austin said: “My race today was pretty great, I knew that I really needed to work hard but also save my energy. Everything went according to plan and I knew that I couldn’t have given anything else.”

With athletes from both categories (PTWC1 and PTWC2) racing together, there was a staggered start with PTWC2 (least impaired) athletes starting behind.

The men were the first out on the course, with England’s Joe Townsend (PTWC2) and Mark Conway (PTWC1) the only Home Nation athletes taking part.

Starting with a three minute deficit, Townsend was the last athlete out of the water. However, as a strong hand cyclist, was soon able to catch the rest of the field on dry land. 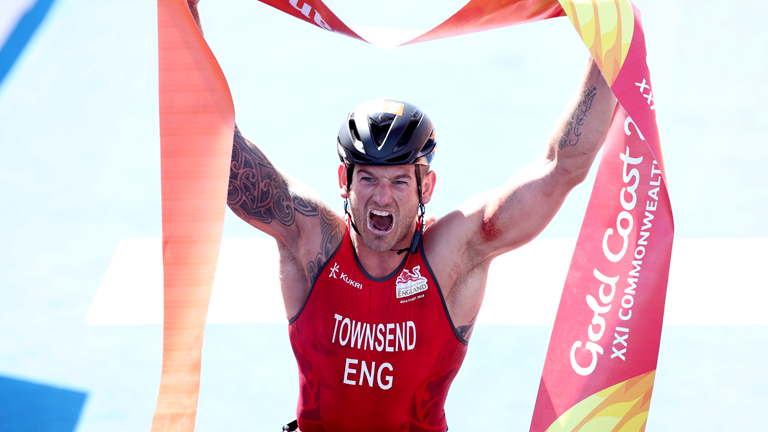 Above: Joe Townsend wins the first ever paratriathlon medal at a Commonwealth Games

Australia’s Nic Beveridge and Bill Chaffey were first and second, with Beveridge ahead by close to a minute and Townsend chasing them down lap-by-lap.

Townsend passed Chaffey and caught Beveridge in T2, moving into first place as he changed into his racing chair faster than the Australian.

Pushing hard for the final 5km, Townsend crossed the line almost a minute ahead of Beveridge to become the first ever athlete to win a paratriathlon Commonwealth gold.

Having watched their compatriot win, England’s Jade Jones and Lizzie Tench (both PTWC2), alongside Karen Darke (PTWC1) of Scotland raced in the women’s race.

It was Lauren Parker (AUS) who was first out of the water however, and with a lead of almost two minutes on her compatriot and world champion Emily Tapp (AUS).

With the staggered start, Jones had time (3.58 minutes) to make up but came out of the water third with the deficit cut to 3.37 minutes.

Above: Watch Jade Jones as she crosses the line to win

She soon caught and passed Tapp on the handcycle, proving herself too strong for the Australians as she overtook Parker on the run course to power herself to victory.

Having made it a paratriathlon clean sweep for England, Jones said: “I was always chasing, which is tough mentally, but to push through was great.

“I swam really well, and I have been working on my swimming for the past six months. Anybody who knows me knows how much this means to me.”

The final triathlon racing of the 2018 Commonwealth Games saw athletes team up for their nations in the mixed relay.

Having won the inaugural Commonwealth mixed relay triathlon in 2014, England made one change for 2018, Learmonth racing alongside Holland and the two Brownlees instead of Jodie Stimpson.

The Welsh team battled to come out in 6th place, beaten narrowly by the Bermudan team that was spearheaded by Duffy. The team from Scotland finished in seventh.

In a lead that changed hands many times, England were unable to defend their crown from four years ago as the Australian’s made the most of home advantage to win.

As the first of the English team to take to the course, Holland established a narrow lead of five seconds in her 250m swim, 7km cycle and 1.5km run.

Taking over for the second leg was Jonathan Brownlee. He, and Australian Hauser, put the hammer down to carve a decisive lead and set up a shootout for the gold medal between the remaining athletes in their teams.

The third leg proved crucial and, despite Learmonth opening up a 15 second lead over Ashleigh Gentle in the water, it was the Australian who created a telling gap on the run after Learmonth stumbled in T2.

Birtwhistle took over from Gentle with a 39 second lead which, despite the best efforts of Alistair Brownlee, he was able to stretch and ensure Australia won gold on home soil.

2018 was a great year for triathlon across the three Home Nations and we’re recapping the action in a series of Swim, Bike and Reruns.

In addition to the Commonwealth Games, British athletes experienced a home European Championships in Scotland, as well as the World Triathlon Series in both Leeds and Nottingham that year.