We’d love to give you some tips and inspiration for swim, bike and run activities as well as keeping fit in general. We can all discover how much fun it is to be active. 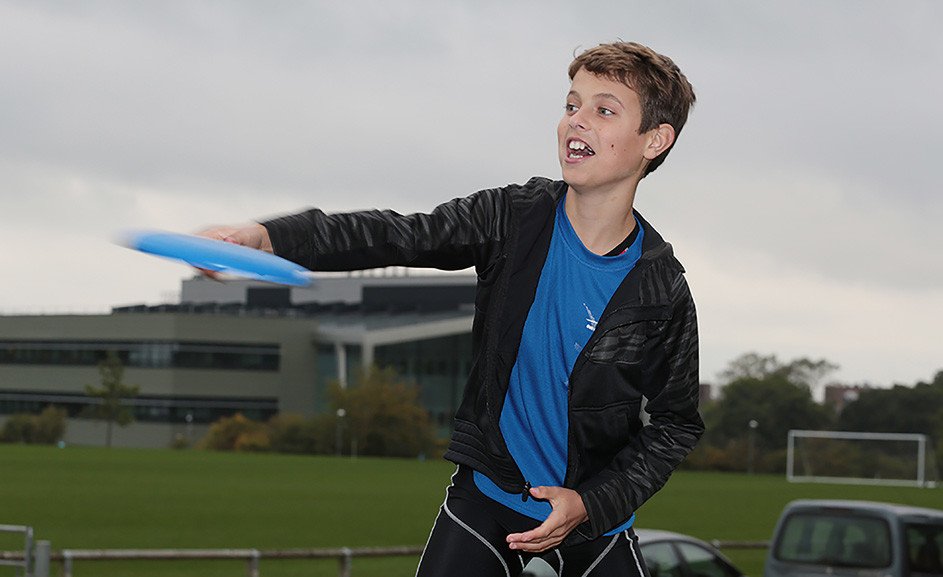 Getting-to-know-you games or icebreakers are great when meeting new people. They may also be a good way to get to know your friends even better. Find out more about your friends interests, humour and experiences by doing activities together. We’ve provided some inspiration for you – see what you think!

Equipment: a basketball or football

Form a circle. When the person with the ball says “go”, everyone has to bring a foot up in the air so that they are balancing on one leg. Whoever has the ball will say a name and toss the ball to that person’s chest to catch. Keep passing until someone either misses or lets their “up” foot touch the ground - that person is out, and the game continues until there are only two participants left.

Create a long row by standing one behind another. Hold the shoulders of the person in front. Everybody should keep their eyes closed except the first person. The first person will go over, around and under obstacles. Make sure the rest of the “snake” follows the leader.

Tip: The snake can move up and down stairs, in and out of rooms, around cones etc.

The Island and the Ocean

Place the benches in the play area and place a mat on each side of the benches. The benches are islands while the mats are ocean. The ocean is the home of massive sharks who love to eat little children for dinner! Therefore, no participant should enter the ocean during this exercise. With children on each bench, give various commands, such as to organise themselves in alphabetical order, by age, birthday, height or similar.

Tip: to increase the difficulty, you can introduce a rule that participants aren’t allowed to talk during the exercise.

Swimming, diving, splashing around and playing in the water is great fun. There are a number of swimming activities out there and maybe some of the games and activities below inspire you? Just remember safety first! Before you dive in with your friends, make sure that you have responsible adults around to make sure you’re all set up for a safe and fun game session.

Equipment: kickboards for each participant except one

Assign a “home” for each team along the side of the pool. Spread the pool toys in the pool. Each type of item is a different fruit (e.g. yellow items are bananas, red items are strawberries etc.). Each team has to gather as much fruit as possible. Only one person from each team can swim at a time. The team who collects the most fruit has won.

Tip: Introduce a rule where each type of fruit requires a different swim style.

This is like freeze tag for the pool. One person is “it” and tries to tag the other participants. If a child is tagged, they must stand frozen like a popsicle with their hands straight in the air until another player frees them by swimming between their legs.

Cycling is a fantastic activity and maybe you’re already enjoying cycling on a regular basis. If you’ve run out of ideas for activities, check out the list below to find some inspiration. Just remember safety first! Before you start your cycling game session, make sure that you have responsible adults around to make sure your routes and sessions are both challenging and safe. For all of the bike activities you’ll need your bike and safety equipment. Helmets are a must!

In this game, you will be riding your bike in a straight line, one in front of the other. The child in the back of the line has to pass everyone on the outside and get to the front of the bike line as fast as they can. When they make it to the front, the new person at the back passes until they get to the front. Go through the game until everyone has had a turn, communicating with each other while you are passing.

Equipment: chalk and a monster mask

Draw two parallel lines around 30 metres apart on a gravel or tarmac play area. All the cyclists should be able to line up next to each other behind both lines. The activity leader (“tickle monster”) is standing in the middle of the play area with his back towards the cyclists. When the activity leader yells “avoid the Tickle Monster!” the participants try to cross the field without being tagged. If tagged, a cyclist lose one out of three lives – if tagged three times, one is out. After a while, you can play the game with two more Tickle Monsters.

Create an obstacle course by using chalk and cones. A gravel or tarmac play area is suitable. Make sure that participants will have to navigate through the course and turn several times in both directions.

Equipment: As many adults as there are children

Find a playground or tarmac or gravel playing area. Pair up. Each pair has an adult on foot and a child on a bike. The children have to keep behind their adult partner while the adults weave in and out among each other. To begin with, the adults should keep a certain distance from each other but the game gets harder and more fun when the adults begin to weave closer to each other and the area gets smaller. If the adult stops, the child must cycle in a circle around the adult.

Using chalk, draw a line across a gravel or tarmac play area. Be creative – for example, the line can be curvy, straight or in the figure eight. Ask participants to cycle on the line as slowly as they can. If they put their foot down, they’ll have to start again. Who’s the slowest?

Running is an important part of triathlon and should be included in your training but there’s no need to do boring activities or the same type of training all the time! Vary your training with some of these fun activities that involve running. You’ll be amazed how much you’ll run and how much fun it is.

The Jockeys and the Wild Horses

Play on an open field. Place a gym mat (“stable”) in each corner. Four participants (one for each stable) are jockeys. The other children are wild horses and move freely within the field. When the activity leader says “go”, the jockeys can catch horses. When a horse has been tagged, the jockey rapidly takes the horse back to his or her own stable before catching more horses. The jockey with the most horses is the winner!

Play on an open field. Place a gym mat (“birdhouse”) in each corner. Place all other equipment (“bird food”) in the middle of the field. In teams, the goal is for the children (“birds”) to bring as much food as possible to their birdhouse. Only one person at a time and only one item at a time!

Tip: Add an extra round where all birds can fly simultaneously to other birdhouses to steal food.

Play on an open field. Create a “hospital” using gym mats. One participant will be the “plague” trying to “infect” the whole village (the other children) with a deadly disease. If tagged by the plague children must lay down. The only way to heal and get back into the game is if healthy children bring the sick children to hospital. Who wins – the plague or the village? Children can’t be tagged while carrying someone to the hospital.

Split the group into two teams and cone up a “jail”. Team one (the cops) will try to chase team two (the robbers). Robbers are arrested by tagging them and bringing them to jail. Robbers can stage a jailbreak by tagging one of the prisoners without being tagged themselves. The cops have won when all robbers are in jail.

Triathlon training is awesome but for a bit of variation, you might want to do some alternative activities. Maybe you can be an activity leader yourself by explaining a new game to your friends? Alternatively, ask your coach or a responsible adult for help and get going in no time!

Two participants will hold a bar (the limbo bar). All other participants must attempt to go under the bar with their backs facing the floor. Whoever knocks the bar off or falls is out of the competition. After everyone has completed their turns, the bar is lowered slightly and the limbo dance continues. The contest ends when only one person can successfully "limbo" under the bar.

Select a category, for example “animals”. Write the name of various animals on as many notes as there are participants. Tape a post it note to the back of each participant. The participants must then go around the room trying to guess which animal they are. They may only ask yes/no questions.