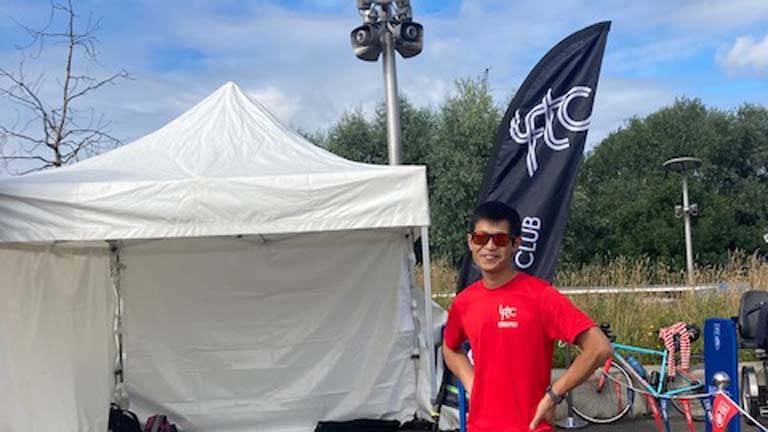 Alex Yee from crystal to gold

Two-time Olympic medallist Alex Yee was part of the Team GB triathlon squad that dominated in Tokyo but it was at Crystal Palace Triathletes where his swim, bike, run journey began.

Jon Horsman is head coach at the club and worked with Yee as he took his first steps in the sport, becoming one of the original members of Crystal Palace Triathletes’ junior section.

“His dad was a member of the club and a lot of the junior members had parents who were adult members of the club,” Horsman said.

“We started the juniors when Alex was about nine or ten. We had an induction day and it went from there. He would have been one of the original [junior] members.

“We launched the junior section and he was one from then. He chipped away and just worked at it. He did well in the London series and represented London in the IRCs.”

As Yee developed and improved he was selected as part of London’s regional academy, and from there onto the English Talent Squad.

“One year he got third in the IRCs [Inter Regional Championships], so that was his first breakthrough at TriStar 3,” Horsman added. “We had quite a good training group who were really keen, about eight of them, and it inspired the younger athletes to be part of this training group.

“If Alex had been on his own, I don’t think we would have been able to cater for him, but because we had this little group and they were all able to train together there was a lot of camaraderie. As Alex became a bit better I had to find ways of maximising our sessions and creating sessions for him.

“When Alex was a junior he moved up into sprint distance triathlon races and he went to a race in Holten in Holland. He ended up coming second and it taught us all a lesson never to underestimate the athlete in front of you.

“It was such a dramatic result bearing in mind Alex had been lapped out in the British Triathlon Assessment Day in Loughborough three months earlier, so his goal was to just finish the race.

“It was a shock for him as well and from then on that was it, he started winning junior races and it snowballed from there.”

For Horsman, the key has always been to make sure the athletes he coaches enjoy the sport, with him working with Yee in those early days to help him see beyond the results.

“You say to yourself that as long as they do the best they can,” he said. “They always say you learn from your mistakes and your bad experiences, but you don’t want too many of those.

“It never really mattered if he came first or last, it was just all part of his progression. When he went off to uni, that was his next step really.”

Having moved to university in Leeds and begun training at the triathlon centre in the city, Yee would still join in with club sessions when he returned to the capital for term breaks.

“We would always cater for him there and then and obviously the younger kids knew him then and remembered him, so they’d love it,” Horsman explained. “He’d also bring some ideas and I’d let him be in charge of part of the session and lead it. He popped down in September and said could he join in, he’s that kind of individual.”

Having won individual silver in Tokyo, Yee commented "I still feel like a normal boy from south east London. I hope I can serve as inspiration to people to show this is possible. I’m not anything special, I just really enjoy sport and have been really lucky”, with this message one that Horsman hopes can inspire more young athletes to take up and carry on in the sport.

“I think the fact that he just joined from a pretty humble background and wasn’t a specialist swimmer or specialist runner at the time, I think the message is that it doesn’t matter who you are,” Horsman commented.

“If you work hard enough at something and you’ve got that dedication and love for the sport you can go as far as you want to go really.

“That’s the Olympic dream, the fact that anyone could get to the Olympics. You can dare to dream and for the youngsters you can take that message to them – ‘this is where Alex was and this is where you can be’.

“It’s a small percentage who actually make it there, but that doesn’t mean to say you can’t dream and do your best to try and get along that journey.”