Triathlon has enjoyed significant growth in Britain since triathlon came to the country in 1983.

In 2019 there were around 150,000 committed active racing triathletes in the UK (Triathlon Industry Association).  Other people do triathlon as a ‘bucket list’ activity.  Sport England believe that about that 215,000 people in England did at least one triathlon in the last year.

Triathlon England, Triathlon Scotland and Welsh Triathlon membership has increased by over 200% since 2009.  Over 33,000 people purchased a membership in 2019.

There were approximately 220,000 race starts across Britain in 2019 – in both Permitted Events and GO TRI.  So on average, there were about 600 people doing a triathlon per day.  The number of race starts has increased by 82% since 2009. 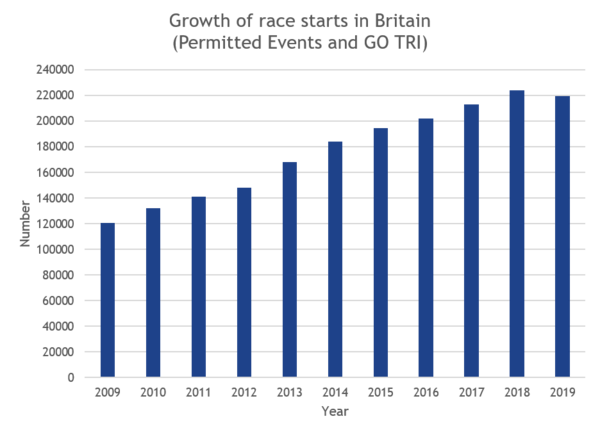 British Triathlon offer permitting services to events with the objective of ensuring that the events around the country are safe and fair for competitors.  There was an average of 25 permitted events happening each week so plenty of opportunities to get involved.