A Team For All Ages

At nearly 3,000 members and with ages from 16 to 82, the Great Britain Age-Group Team was one of the largest and most recognisable at World and European Championships in 2019.

Open to all British Triathlon members, the Age-Group Team gives triathletes the opportunity to qualify and represent Britain in their age category at events around the world.

British Triathlon Board Member for Age-Group Nicky Dick has witnessed a lot of success since taking up the role in 2015. This year has brought more of the same, with the blue GBR trisuit and British flag seen at 22 events and atop many a podium in 2019.

“The strength of our Age-Group Team is the real sense of community and pride in each other’s performances and success,” Dick said. “With over 500 medals won throughout the year, we’ve brought home a gold medal from each ITU or ETU Championship that members of the team have raced at.”

A member of the team herself, Nicky has raced and experienced the team spirit that engulfs the British Team: “I get to travel to a number of events as a Board Member and a competitor, and it’s an inspiring and emotional thing to see airports full of athletes in their kit,” Dick said. 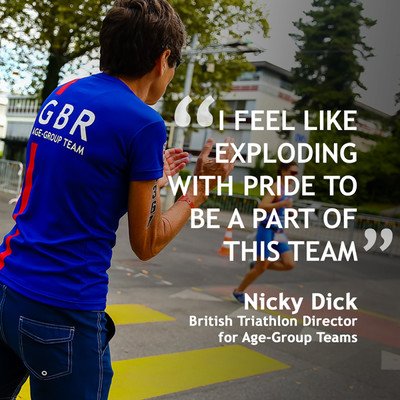 “The sense of pride that I and others feel when pulling on the kit is immense, and representing the team is something I’d recommend to anyone who wants to push themselves in triathlon.”

In August, along with 630 other British age group athletes, Nicky headed to the World Championships in Lausanne. Bringing together age groupers from across the globe, the event saw them race on the same course as the elite athletes of the World Triathlon Series.

“The swim in Lake Geneva was simply jaw-dropping and to race around the city with friends and team members cheering you on was an incredible experience. Wherever you go to compete you’re supported by team mates and the team managers, helping to ensure you’re ready to race” Dick said.

“Whether at the parade of nations at the start of a championships or hearing the cheers when racing or seeing restaurants full of British athletes at events, I feel like exploding with pride to be a part of this team and be the Board Member responsible for looking after them.”

As well as being a member of the British Triathlon Board, Nicky is Chair of the ITU Age-Group Commission. In these roles she gets to work with age group athletes and national federations from around the world, hearing about individual stories of how the opportunity to represent their nation brings inspiration to those around them.

“You can read stories in local papers about members of the Age-Group Team throughout the season,” Dick commented. “These athletes are everyday people and often members of local clubs, whether that’s triathlon or swim, bike or run clubs.

“To see members of their local community representing their country is an encouragement to triathletes and non-triathletes alike. Triathlon is such a great sport and, whether you’re looking to represent Britain or simply give your first event a go, I’d say go for it and get involved.”

In 2019, nearly 3,000 people raced as part of the team at an ITU or ETU Championship. Consistently one of the largest teams at events throughout the year, athletes qualify by taking part in qualification events in Britain in the year before the competition.

Qualification events for the 2021 Championships will take place in 2020 and you can find out more about the Age-Group Team and how to qualify in the Age-Group section of the website.