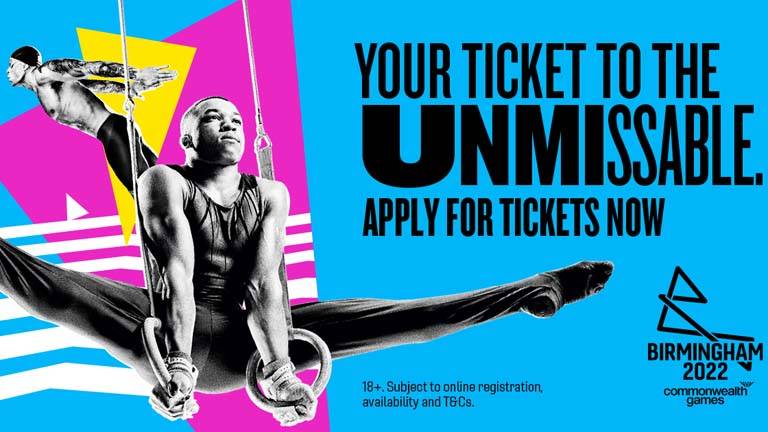 Bartlett's journey from IRONMAN to guide

Her career has seen her rise from university rower, to achieving fourteen IRONMAN 70.3 podium finishes and winning gold at IRONMAN Lanzarote 2019. She eats, sleeps and breathes triathlon. Yet surprisingly, her journey to the sport began with another. Bartlett was a rower on the British Rowing World Class Start Programme whilst at university and like many others, discovered triathlon as a way of rehabilitation during injury.

“I was rehabbing, and my friend was doing a half IRONMAN and I genuinely didn’t know what it was. She described it to me and said that I wouldn’t be able to do it because I couldn’t swim and I didn’t have a bike and I hadn’t ran for years, so that made me want to do it because it was so far from what I could do,” Bartlett said.

Despite her first exposure to triathlon being The Little Woody, a punishing 70.3-mile race, Bartlett appeared to naturally take to the sport, saying: “We just did the race and we were really relaxed, and our family came to watch and we both loved it from there.

“I had no water bottle on my bike and no food with me because I didn’t know how long it was going to take. I can remember on the bike; my stomach was rumbling and there were no aid stations on the course.”

Bartlett’s triathlon journey continued to be a baptism of fire, as she selected her second race to be a full 140.6-mile race, saying: “My friend and I made a pact that we would both do a full IRONMAN by the time that we are 30 and I was 24 at the time.”

Bartlett decided to compete the following year, racing in support of a cancer charity. She didn’t necessarily set out to fulfil any personal goals at the time. Bartlett said: “I can remember, we travelled home that night and my brother was looking at the results, I wasn’t aiming for any particular position, but at that moment my brother told me that I won my age group.”

In the years that followed, Bartlett enjoyed a successful career racing at age group level until 2016. Speaking about her progression as an athlete up to this point, she said: “I think coming from rowing has taught me a lot about mentality in sport, discipline, structure and love for sport.

“It’s tough. You miss out on a lot and I missed out on a lot more when I was rowing because you have to be at one centre, whereas with triathlon you can actually pick up your training and take it with you. I developed the skills I needed to in a couple of years and got some race experience because I didn’t want to go professional until I thought that I was ready.”

Above: Nikki Bartlett talks about her first Guiding experience alongside paratriathlete Alison Peasgood..

After a unique introduction to the sport and continual progression, Bartlett was searching for something new to conquer. With this, guiding for visually impaired paratriathletes was an exciting opportunity. Bartlett said: “When I got into triathlon, Jack Peasgood, Alison’s husband was one of the first people I met, and I used to go to camps and races with him”. She continued: “I went to Alison and Jack’s wedding, got to know Alison and when we were living in Scotland, we went on a few rides with them.”

In 2018, Bartlett discovered British Triathlon’s Guides for Gold scheme, saying: “I thought that I should do it because I know what Alison needs from a guide in terms of confidence, in terms of swim, bike and run ability and I felt like I would be one of the best guides in the country to be able to deliver that. I then had to go and prove that and put down performances and train hard and develop that confidence and trust which is one of the biggest parts of it.”

Bartlett recalled the first time her and Peasgood rode together and how far they have come since their first outing, saying: “I was in Scotland at the time and me and Alison rode a tandem around a little loop of an estate and I got on and all of a sudden we were snaking across the road. The worst thing is that you need to just keep the momentum of the bike going so we were wobbling all over the shop.

“I feel like I picked some skills up pretty quickly on the day and I knew that I just wanted to keep on practicing. For swimming, Alison likes a guide to be in a certain position in order to swim as fast as possible, we worked on open water skills and communication through tapping. We also have tactics for when other athletes are around us and what we want to do about that.”

Since guiding, Bartlett has had to balance her training between preparing for paratriathlon races with Peasgood and fulfilling her personal career goals as an individual athlete, saying: “I’m at my fittest when I’m doing 70.3 and IRONMAN training, so the best I can be for Alison is to be swim fit.

“If I’m going onto an IRONMAN race, I might throw in some longer swims, but in terms of swimming, I’m following a sprint/standard distance programme. For Alison’s key races this year, I’m putting in an IRONMAN to work around those dates so that I will be at my fittest states around the Paralympic qualification races,” she continued. 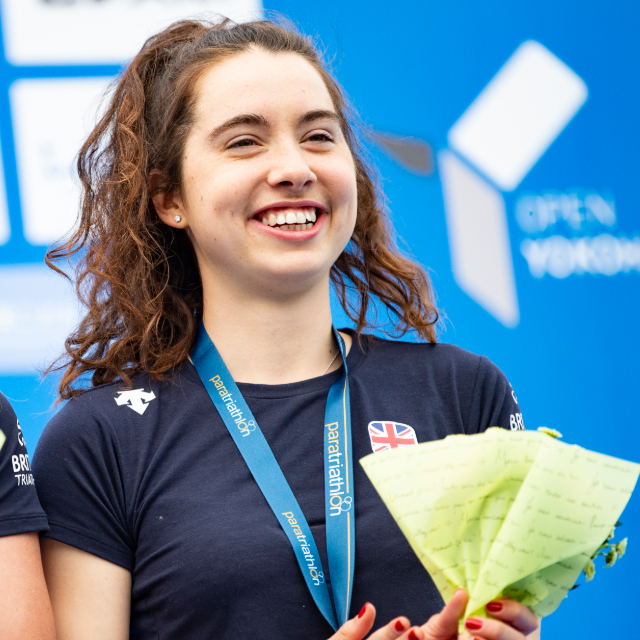 Above: Rosie Lindsay at Yokohama in 2019.

“We’re also very lucky to have, Rosie [Lindsay], Alison’s Training Guide, who is an integral part of any race result this year. She’s an absolute rock, and supports Alison day in and day out, we couldn’t do it without her,” Nikki said.

Speaking on how her experience as an individual athlete has informed her career as a guide, Bartlett said: “You have to develop a lot of confidence in yourself and your ability through your own racing and that’s probably the biggest aspect of being a guide. If I’m guiding Alison, then I need her to know that she can have full confidence in what I’m doing and if I make certain calls in races then she can trust me. I just want her to put her best swim, bike and run down and not have to worry about what I’m doing.”

Being a guide means that Bartlett spends a lot of time training in Loughborough at the Paratriathlon Performance Hub. Here athletes have access to world-class facilities and skilled practitioners as well as the opportunity to work alongside a large group of paratriathletes and guides.

“It’s such a healthy balance of working hard but having a good laugh around it. If I had the opportunity to choose an environment, I’d choose this one,” said Bartlett.  “Having the access to the world class facilities is what allows you to be the best athlete. Without that support, you couldn’t do the training day in, day out and to be the best athlete possible, you need to have consistency in training.”

This support can be incredibly valuable, particularly for athletes competing in an individual sport like triathlon. Bartlett said: “Racing alone, all the opportunities you miss throughout the year like family events, birthdays, all that stuff adds up. 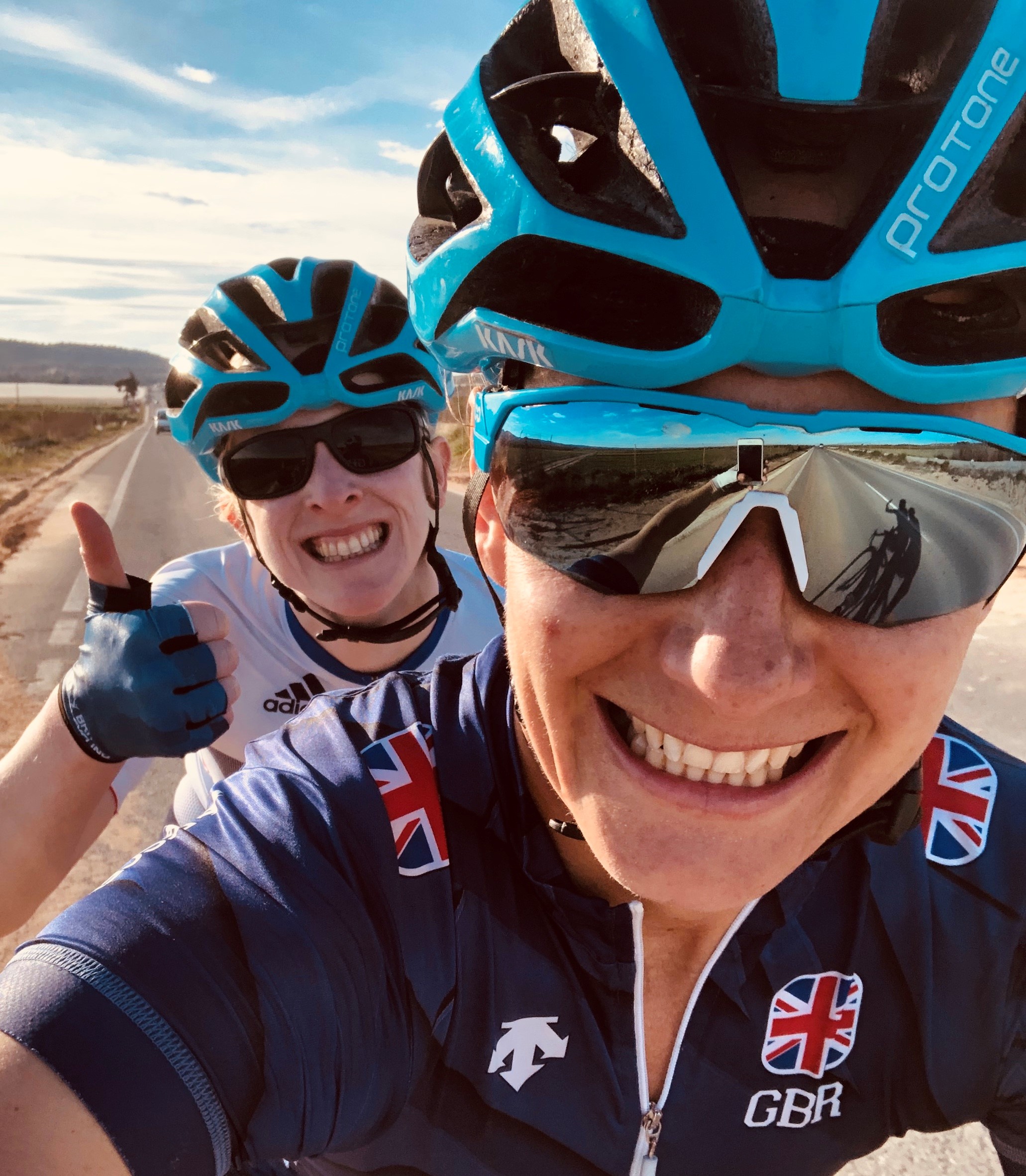 Above: Nikki Bartlett and Alison Peasgood on a training ride in Loughborough.

“I know how much Alison has put into the sport and I want her to know that she can go into every race this year with full confidence that she can deliver. I want her to be relaxed and focused. I want to not just be a guide but to be a friend and someone that she can lean on in any situation. I’m not just there for a job role, I’m there as a friend.”

Having a career as both a guide and an individual athlete, Bartlett has to balance both her own racing schedule and Alison’s, saying: “Whatever decisions that I’m making now, it’s for the both of us, it’s for our development this year, so I can’t be selfish in that respect.”

She continued: “I just want to be the best guide possible and I want me and Alison to get the best results possible. I want to know that every finish line that we go through, we know that that’s the best we could’ve done on race day.”

Recalling her first and only time guiding Peasgood in 2019, at Milan ITU World Paratriathlon Series, Bartlett said: “We were on the pontoon and all these weeds came down across the lake and stopped in front of us. As soon as the swim started, we hit the weeds and the tether flew off. When I looked up, everyone had gone past the first buoy. Obviously, Alison had no idea what’s going on or where anyone else was, so I had to go back, get the tether and pull her back up. Luckily, we managed to come out of the swim first.

“On the bike I needed to keep Alison relaxed and allow her to see that I was fine, that I was confident and relaxed. I needed to communicate where everyone else was, because we came out of the water around twenty seconds ahead and she might have thought that we came out with everyone being miles ahead.”

Peasgood and Bartlett crossed the finish line in 1st place, beating 2nd place Susana Rodriguez by over a minute. Bartlett reflected on the race, saying: “In those situations, you have to stay in the moment and break the race into parts and not think about the end goal.”

Above: Nikki Bartlett talks about her Guiding experience with British Triathlon.

Paratriathlon has seen a surge in popularity over the last few years, especially with its inclusion in the Rio 2016 Paralympic Games. Bartlett affirms the bright future of the sport, saying: “The environment and the centre that we have, everyone is pushing each other on. In swim, bike and run, it’s not just me being Alison’s guide so I’m going off with Alison, everyone is working together. I’ll push Claire [Cashmore] on certain places, Claire will push more on certain places, there are new athletes coming in like Michael [Taylor] and Hannah [Moore]. There are more coming through like Fin [Jakes]. It feels like a real unique training group, with everyone working together really nicely.

Being in a position as a guide to inspire the next generation of both paratriathletes and able-bodied triathletes is something that Bartlett is acutely aware of, saying: “I want to grow the sport and I want us also to deliver results that make people wonder what they can do to be at that level. If your journey inspires one kid at home, then it’s totally worth it.

“Allowing visually impaired athletes around the country, even if they’re in a sport already, to see the opportunities made available by British Triathlon is amazing. It allows people to see that actually, you can mix up your individual racing with guiding and allowing an athlete of Alison’s ability to have the right guide. The more guides involved, the more athletes will want to come on board and make it more competitive.”

Bartlett concluded by saying: “Guiding is a very unique opportunity. It’s an absolute honour to represent your country.

“If we can keep growing the standards and allowing athletes around the country to be based in Loughborough, then it all goes hand in hand and down the chain.”