With the Tokyo Olympic Games postponed for a year, we’re throwing back to London 2012 and Rio 2016 to relive some Olympic triathlon action.

Triathlon made its Olympic debut in Sydney in 2000, with Simon Lessing and Stephanie Forrester the team’s highest finishing male and female athletes in 9th and 15th, respectively.

Roll the clock forwards and both Athens and Beijing had failed to bring about a triathlon medal for the team, however, did see the Olympic debuts of Alistair Brownlee and Helen Jenkins in China, two athletes who had their eyes firmly set on a home Games at London 2012.

Brownlee said: “Beijing was very different as we were trying to prepare for hot, humid conditions in training camps, but this time we’re competing in our home Games. This time feels very different but at the end of the day, as a triathlete, I’ve still got to swim, bike and run and hopefully all the work I’ve put in will pay off on the day.”

Helen Jenkins, who was now a two-time ITU World Champion, commented: “The aim for British Triathlon is to win a medal and I think the three of us working together, if three of us are committed to it, we’ve got more chance to achieve it.” 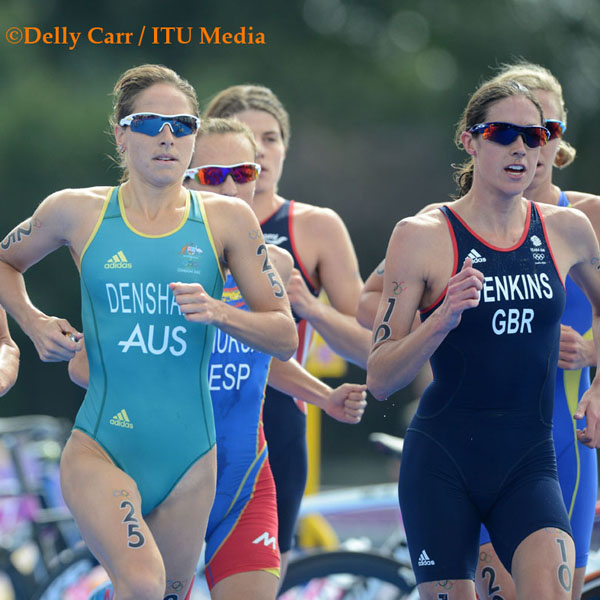 Above: Helen Jenkins led the women's team in the London 2012 triathlon

Referencing the fantastic support that Team GB has received so far, she added: “It really motivates you watching other athletes racing and how much support they’re getting.”

The home support certainly proved beneficial for the team, as Helen Jenkins secured the highest ever finish by a Team GB triathlete as she took fifth in the women’s race having been amongst the leaders all the way until the final lap of the run.

“I am so grateful to Vicky [Holland] and Lucy [Hall], they put me in the right position,” Jenkins said. “They delivered me to the right place, but I didn’t have the legs on that last lap, the girls who got the medals, they deserved that.

“I have an amazing team that has got me to the start line. The crowd was amazing. I think if they weren’t there, I would have been a bit further back, they really pushed me.”

Three days after Jenkins, Holland and Hall had raced, Alistair raced alongside his younger brother Jonathan and Stuart Hayes in the men’s race. 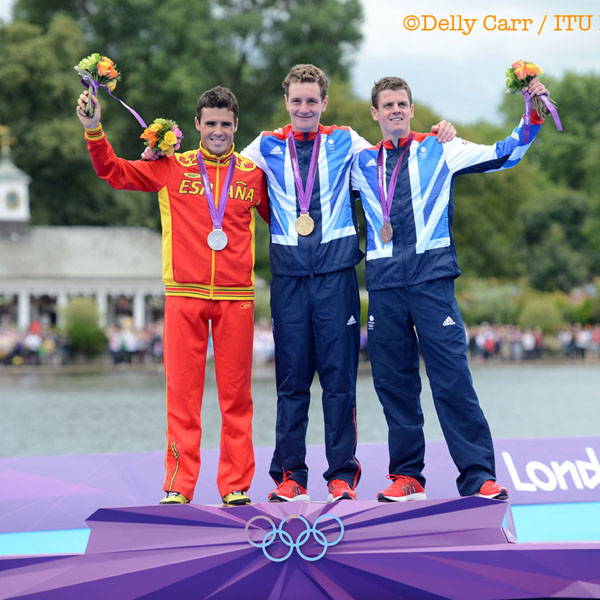 Above: It was first and third as Team GB won it's first Olympic triathlon medals

The brothers became the first Team GB triathletes to win Olympic medals, with Alistair picking up gold ahead of Jonathan’s bronze having been supported all the way through the swim and bike by Hayes.

Olympic champion, Alistair, commented: “I am immensely proud that my brother can get a bronze; we made no secret that we wanted to get both of us on the podium today and that’s not an easy thing to do considering Britain’s never won a medal in triathlon.

“We gave it everything; it shows the strength of training together and pushing each other on all the time. With Stuart Hayes we really were a team of three. Today we had a plan and we executed it really well."

You can read a full report of both the men’s and women’s races here and watch the races in full on the buttons below.

The women’s race was once again the first to take place, with Olympic debutant Non Stanford saying: “Having watched so many great Team GB performances I can’t help but feel inspired about my first Olympics.”

Racing in her third Games and looking to build on fifth place in London, Jenkins added: “The support of the team around me has made a massive difference over the last few years, and even more so the last few weeks in helping me prepare as well as I could have wanted.”

In what became a battle for the final medal of the race and Team GB’s first women’s Olympic triathlon medal, Stanford and Holland ran side-by-side for the 10km run before sprinting for the finish. 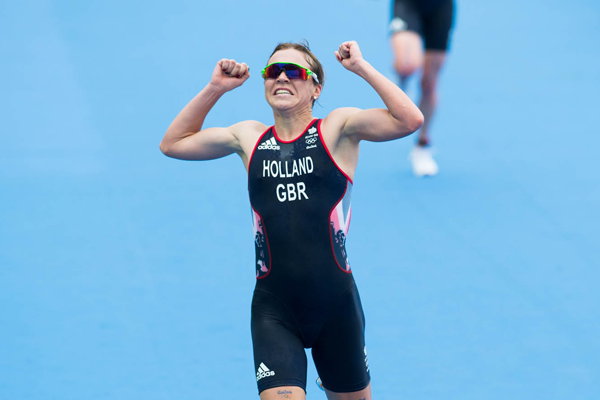 Holland had the better sprint, commenting: “I just had it at the end, and I’m delighted to have bronze, I’m just a bit gutted for Non. We’ve done this whole process together, we train tougher, we live together but it’s not an excuse not to sprint for the bronze medal.”

Stanford was the first to congratulate Holland, commenting: “I’m delighted that Vik got the medal, we came here as a team to get a medal and we got one. Fourth is maybe the worst place to come at the Olympics Games, but it’s still fourth at the Olympic Games.”

With something to defend, the men took to the beach start knowing that a strong Brownlee performance would put them both on the podium once again.

That was the way it turned out, with the brothers dominating from the start and Alistair having the edge over his brother to become the first person to defend an Olympic triathlon gold. 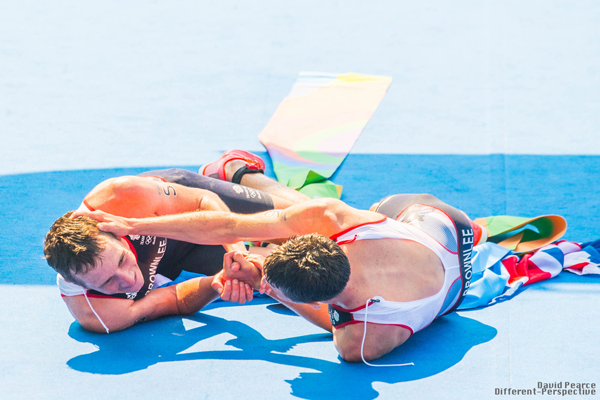 Above: A Brownlee one-two for Team GB in Rio

After the race, Alistair said: “I was pretty confident we were going to get first and second. I didn’t know which way it was going to go, he’s [Jonathan] killed me in training almost every day. We’ve both been flying and pushing each other to the max.”

Having upgraded his London bronze to a Rio silver, Jonathan said: “I’m incredibly proud. I’m used to getting beaten by Alistair at the Olympics and that was the dream result.

“To get gold and silver I’m incredibly proud. I don’t often get emotional, I like to think I’m a tough Yorkshireman, but I was emotional at the end.”

You can relive the action from Rio in our report here and watch the highlights from the two races on the buttons below.