The past year has seen more and more people falling in love with the sport of triathlon and for Chief Executive Andy Salmon, this increase is down to more opportunities and the hard work of the British Triathlon and Home Nation teams.

In 2018, British Triathlon launched their new strategy which strives to offer great experiences through swim, bike, run and Salmon looks back on how the sport is bringing this to life.

“This year has been a phenomenal year with so much going on and attention clearly moving on to the Olympics and Paralympics next year,” Salmon said. “What has been exciting for me has been bringing the new strategy to life and striving to achieving our vision of great experiences through swim, bike and run and being the world’s leading nation.

“Two things really stand out for me as being different from before; one is that we really want to help clubs. If we really want to grow our sport in the way that we want to, then clubs are at the heart of that. There are amazing clubs out there that do amazing things with very little resource and we want to improve the support and promotion that we offer them.

“Secondly, we want to drive participation in children and young people which hadn’t been a priority over the years, but it is now. We are beginning work on how to encourage more people from all ages into the sport.”

Great Britain has hosted an ITU World Series event for the past 10 years and across Nottingham and Leeds the events created a real celebration of triathlon in 2019. People of any age are encouraged to take their place on the start line and enjoy the sport and Salmon, who was at both events, was impressed with the competitors and event delivery team.

“We’ve hosted two World Series events in 2019 with Leeds and Nottingham,” Salmon said. “Leeds really is a festival of triathlon with racing opportunities for every level of competitor taking place over the weekend. It’s a real highlight in terms of increasing the profile of the sport, not only do we have live BBC coverage, but to see that many people taking part is fantastic.

“Nottingham was also a great event for us. Despite the poor weather and the change in the format, the way the team pulled together and created a great performance environment for everyone made me really proud. The result of the mixed relay also showcased the strength in depth we have in the sport at the moment too.

“One of my favourite moments of the year was seeing the four athletes spending time engaging with the school children that had come to take part in triathlon the day before the race. They spent so much time answering questions and it epitomised everything we are trying to achieve in connecting the grassroots level with the elite level of the sport.” 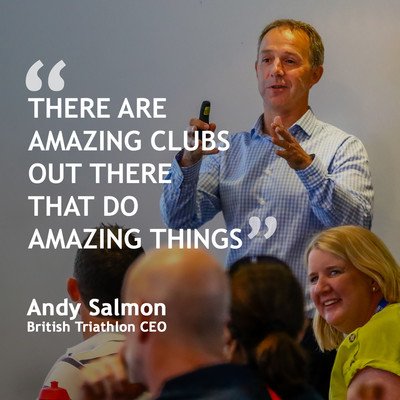 The National Governing Body has been at the forefront of the development of paratriathlon and Salmon wants to continue the momentum of the sport in Britain.

“To build on the success of the events in 2019, we’re want to host a World Paratriathlon Series event and continue to fulfil the responsibility of developing that side of our sport on the world stage. We also want to set a global benchmark of paying prize money to the paratriathletes. We know that we need to secure a series of great partners in to achieve these goals.”

At the start of the year, the participation team launched the inaugural Tri January campaign which created bitesize opportunities for people to try the sport without being overwhelmed by three sports at once.

Tri January was enjoyed by over 5,000 people who took the first steps on their triathlon journey and Salmon was impressed with how far the campaign reached.

“Tri January was a huge success for us in terms of reaching new audiences and producing behaviour change,” Salmon said. “One of the things I am proudest of is how the GO TRI team have managed to engage women with our sport. It’s a striking statistic that almost 70% of the people that signed up in 2019 were women.

“To receive an ITU award was an emotional moment for me. I don’t mind admitting that seeing Jenny [Vincent, British Triathlon Head of Participation] collect the award on behalf of the wider team was really special. British Triathlon is recognised around the world for its competitive performances, but it was lovely to see us receiving the acknowledgement for the work we’ve done to get people active.”

The past twelve months has seen several new commercial partners sign up to work alongside British Triathlon including Oakley, Wahoo and Volvo.

“Partners are critical to everything we aim to achieve,” Salmon said.  “Our strategy is while we seek to maximise the investment we get from Sport England and UK Sport; at the same time we can’t rest on our laurels. We have to work harder and harder to match and surpass that income with commercial partnerships.

“This year, we have seen our relationship with Accenture really blossom and not only are they partners on our major events strategy but their support around the innovation ideas we have to ensure our athletes are the best prepared on the start line is really gathering momentum.

“It was fantastic to bring on several new partners this year which included Volvo. The affinity we have with Volvo is clear. We have shared values and that’s what successful partnerships are all about.”

Next Year offers a number of exciting opportunities for the sport including the Olympic and Paralympic Games, but alongside that Salmon wants to see people caught up and loving the sport.

“For next year, I would like to see us retaining and developing the team we have here at British Triathlon. We’ve gone through significant change in the past two years and we’re in a much stronger place now than we were and we now want to invest in the people we have. I want to see more and more people loving the sport and not just coming in and trying it once but I want us to develop how we keep them coming back. How we create a welcoming environment for them and how we keep them having great experiences whether they are racing, training or just having fun.”