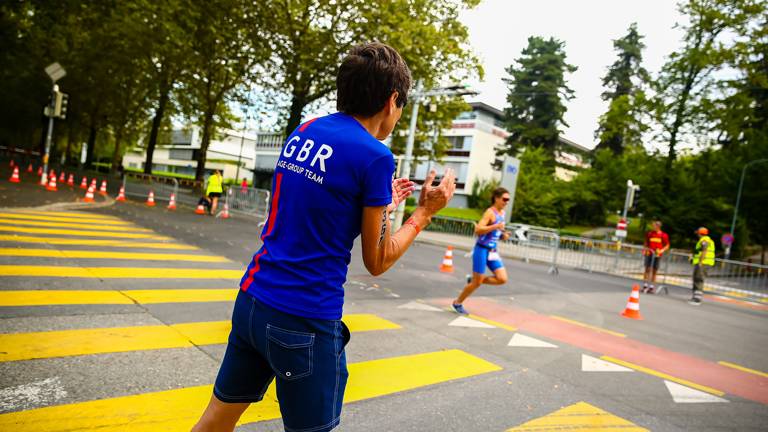 What is the Age-Group Celebration Cup?

A talented squad of Paratriathletes have been selected for ParalympicsGB and will travel to Tokyo for the 2020 Paralympic Games.

Rio silver medallists Lauren Steadman (PTS5) and Alison Peasgood (PTVI) are returning to Paralympic action while Paralympic bronze medallist Melissa Reid (PTVI), who is guided by Hazel Macleod, has also been announced on the team.

Her brother-in-law George Peasgood (PTS5) has been selected to represent ParalympicsGB for the second time after making his debut at Rio 2016. This year has seen him win gold at the World Triathlon Para Series in Yokohama - a race which saw him beat the Paralympic champion for the first time in his career.

Paralympic swimming champion Claire Cashmore (PTS5) made her switch to Para triathlon in 2017 and hasn’t looked back having won world gold in 2019. She will line up alongside Steadman in one of the most competitive classifications in the sport.

Claire Cashmore said: “I’m so proud to be selected for my fifth Paralympic Games and my first with Para triathlon. Being a member of ParalympicsGB is really special and I know that the experience in Tokyo will mean just as much to me.

“I know the hard work isn’t done though. We’re on a heat camp at the moment which will help us acclimatise to the environment in Tokyo and then I will continue to work hard to ensure I am at my best on the start line in August.”

Dave Ellis (PTVI), who will be guided by Luke Pollard, has excelled since joining Para triathlon in 2013 after competing in swimming at the Beijing 2008 Paralympic Games. He has won two world titles and one world silver medal and took the tape at the World Triathlon Para Series Leeds event earlier this year. After his classification wasn’t included at the Rio 2016 Games, he is making his Paralympic debut for Para triathlon.

Alongside Brown, Michael Taylor will be competing at his first Paralympic Games having secured two silvers at the World Triathlon Para Series in Yokohama and Leeds which marked his first international medals at this level.

He said: “It’s a pretty incredible feeling to be going to my first Paralympic Games. Four years ago I remember thinking that was something I could aim for but I wasn’t actually sure if it would ever happen.

“I’ve had so much support and I feel like its been a real team effort from loads of different people and load of different organisations. It’s a great sport and I’m glad I got involved with it when I did.”

British Triathlon Para triathlon Head Coach and Team Leader for ParalympicsGB, Jonny Riall, said: “I’m really excited to announce the team heading to Tokyo this summer. We’ve got a group of top athletes who have proven their ability across the last few years, and an exciting mix of Paralympic experience and first-timers.

“I’ve been really impressed by the way our athletes and staff have worked to prepare for what will be challenging conditions in Tokyo, and we’re all looking forward to seeing what that hard work will result in. Para triathlon has come a long way in Britain and around the world since making its Paralympic debut in Rio.”

Penny Briscoe, ParalympicsGB Chef de Mission at Tokyo 2020, said: “Triathlon made a real impact when it made its Paralympic debut at Rio 2016 and I am delighted to welcome many of those athletes back to the team for Tokyo 2020.

“They are joined by some new faces to ParalympicsGB and the experience of Claire Cashmore who will be competing at her fifth games and has excelled since making the transition from swimming to triathlon. I am really looking forward to seeing this talented squad compete against the iconic backdrop of the Tokyo skyline.

“I would also like to take this opportunity to thank each and every athlete and staff member for their unstinting commitment and laser like focus on Tokyo 2020 preparations despite the myriad challenges presented by the Covid-19 pandemic.”

Around 230 athletes from 19 sports are expected to make up the British team that will compete in Japan, with further names to be announced in the coming weeks.

ParalympicsGB captured the imagination of the British public at London 2012 winning 120 medals in front of sell-out crowds with countless memorable performances.

The team eclipsed that performance at Rio 2016 winning an outstanding 147 medals including 64 golds to finish second in the overall medal table. The rescheduled Tokyo 2020 Paralympic Games will be staged from 24th August to 5th September.