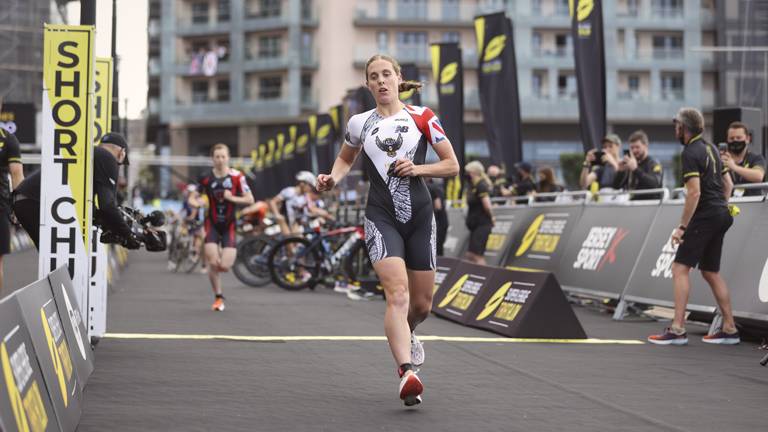 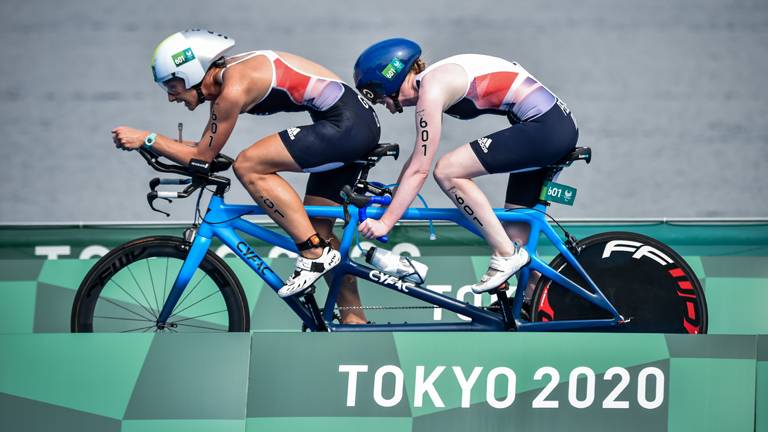 It was an all British podium in the women’s race as Jess Learmonth took gold, Georgia Taylor-Brown silver and Vicky Holland bronze, with Jonny Brownlee claiming bronze in the men’s race.

Canary Wharf provided an iconic setting at West India Quay as the sun came out in London to shine on some fast and fierce racing across the triple mix format.

The women were first up with Learmonth, Taylor-Brown and Holland joined by Beth Potter, Sophie Coldwell and Non Stanford from a British perspective.

The first stage was a traditional swim, bike, run with Learmonth and Taylor-Brown first out of the swim alongside Lopes of Brazil. The trio built up a large lead across the bike with the rest of the British athletes trying to chase them down.

Onto the run and Taylor-Brown had pulled clear with Learmonth whilst behind them Holland had made gains to overtake Lopes for third place. Potter and Stanford also came through the pack to see Brits dominate stage one with Taylor-Brown taking the win.

The second stage was run, bike, swim and Potter, Holland, Stanford, Learmonth and Taylor-Brown all went out hard into the lead with Periault (FRA) and Zaferes (USA). This group stayed together across most of the run and bike stages, only starting to split up through the bike as Zaferes and Learmonth pushed on.

It turned into a swim race before a short sprint to the finish with Learmonth taking the win ahead of Zaferes. Holland was the next Brit across the line in fourth.

Onto the final stage, bike, swim, run and the athletes had a staggered start based on the cumulative position so far. Learmonth, Holland and Taylor-Brown were the first three out with a commanding gap.

Second placed, Taylor-Brown said: “It’s nice to have a crowd and to be here in the UK. To hear the support around us in the race, the Brits get the extra support which is lovely."

Holland commented: “It’s been such a long time since I raced here. I’m really delighted with that, to have some many people here to see the Olympic team and see other British athletes out there perform, cheering for us, it really made a difference today.”

Following the success of the British women, Jonny Brownlee, Alex Yee and Gordon Benson were all racing in the men’s event. Once again it was three stages with the order of swim, bike, run varied each time in the same format as the women.

Haden Wilde (NZL) took the initiative early on, with Vincent Luis (FRA) and Brownlee amongst the leaders as the men came out of the swim and headed out on the bike. The athlete from New Zealand was performing well around the streets of Canary Wharf however Brownlee was going strong and was in second place heading onto the run, with Yee and Benson a group behind.

At the end of the first stage, Brownlee crossed the line third, with Luis second and Wilde first.

As the second stage started with a run, there was no surprise to find Yee at the front as the athletes set off on a run, bike, swim.

He was at the front with a group that also included Brownlee amongst a number of strong international athletes including first and second from stage one and Australian Jacob Birthwhistle.

As the athletes came out of second transition it was a group of nine athletes in the lead, however Luis and Brownlee were able to pull away in the water to make it a two-man race in the water and over the short sprint to the line. Luis held on to the lead with Brownlee second.

Once again, it was a pursuit start for the final stage (bike, swim, run). Luis, Brownlee, Wilde, Vasco Vilaca (POR), Seth Rider (USA) and Yee were the first athletes onto the course.

These athletes split out into a top-three of Luis, Brownlee and Wilde, with Vilaca riding alone ahead of Rider and Yee across the bike. Similarly to the second stage, Luis showed his strength through the water pulling ahead of Brownlee as the pair swam clear of Wilde.

Brownlee passed the French athlete in T2 to take a small lead with Yee in fifth. As Brownlee and Luis jostled for first place, Wilde took the short chute having earned it earlier in the racing with that proving decisive as he took gold, Luis second and Brownlee third.

Yee rounded out the top five and Benson finished twelfth.

Bronze medallist Brownlee commented: “It was absolutely brilliant. It’s really hard racing Super League but I really enjoyed it. The setting, you don’t get much better than this. Being British we always turn out, so thank you everyone for coming. I keep telling people we put on the best events and we’ve done it again.

Having crossed the line, Yee said: “It’s my first elite triathlon race in London and as the crow flies probably only about two miles from my house. For me, I feel like, although I didn’t have my best race I feel like I showed a lot of strong points and I can still mix it in this format and hopefully as the races go on I can learn from the mistakes I made today and build on that.”

Tim Don’s Eagles took the most points from London in the SLT Teams standings, with Don saying about the Teams format: “It’s just that little bit extra. You’re looking out for each other and it’s something we haven’t seen before in triathlon. I think it’s a really good additional thing to format that’s just killing it in Super League Triathlon.”

You can view the final individual results and current standings in the SLT Championship Series on the button below.