Four years in the making

Every four years, the world’s top athletes come together for the ‘Greatest Show on Earth’ supported by a team of coaches and staff.

With 2020 nearly here, the four year wait for the Olympic Games is almost over. Having raced himself in Sydney 2000, British Triathlon’s Olympic Head Coach, Ben Bright, was part of the coaching team in Rio and is looking forward to heading to Tokyo for more of the same.

“Racing at an Olympic Games is exactly like every other race, but completely different,” comments Bright. “The pre-race processes and swim, bike, run are the same, but the noise, crowds and attention on the sport is increased.

“We’ll take the athletes to a holding camp before the Games, away from the Olympic bubble, to help them prepare. We’ll embrace what’s going on by decking the camp out in British Olympic Association and Team GB posters, but as support staff we’ll be helping the athletes to prepare as business as usual whilst helping them to embrace the positives of what could be the biggest race of their lives.” 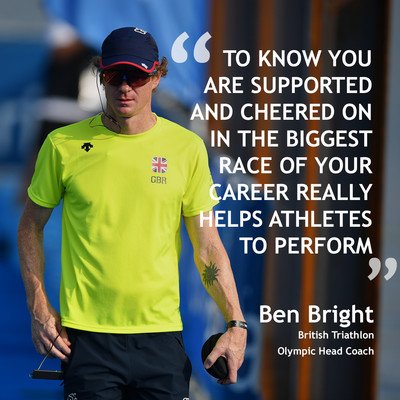 British athletes selected will race as part of Team GB, something which Bright says gives an added dimension: “To be part of something bigger than simply racing as an individual or representing Britain at the World Triathlon Series is a huge bonus for the athletes. It’s more than just being part of a team because you become aware of the support you get from across the sports as well as 65 million people back home.

“Rather than that adding pressure, it actually alleviates a lot of it because the athletes are part of something bigger. To know you are supported and cheered on in the biggest race of your career really helps athletes to perform.”

A key part of preparation for athletes and organisers was the test event this year. The British team recorded great performances in Tokyo, with Bright explaining the benefit of the races: “The test event in August will have helped to ‘normalise’ the training camp, hotel, course and conditions for the athletes. Of course everything will be different because it’s actually the Olympics, but the sense of familiarity will really help them focus on the race.”

For the first time in Tokyo, athletes will take on mixed relay at an Olympic Games, something which Bright says will be good for the sport at all levels: “As a faster, more action packed format of the sport, mixed relay being at the Olympic Games is a great showcase opportunity for triathlon.

“With the distances of mixed relay being more attainable for most, it provides an opportunity for anyone at home to emulate what they see. Mixed relay is shorter distances and shorter times, so people of all ages can see themselves doing it,” Bright adds. “We’ve all heard the story of the person sat at home watching the Olympics who becomes inspired to go out and find their local club or event to live out that moment from the TV.”

Above: Odaiba Bay will host the triathlon races in Tokyo next year

Team GB have had great success at the Olympics since the turn of the century thanks to National Lottery UK Sport Funding and Bright notes: “Britain has gone Olympics mad over the last 20 years or so with success and passion for the Games really taking over the country in so many ways. Sport plays a huge role in British culture, but because the Olympics are every four years and are a global event, there is a different kind of feeling associated with them.

“For the athletes, they can’t go again next week like in football. This is their moment and it won’t happen again for four years, if ever. It’s one race every four years for athletes to be at their best and this is a really exciting challenge for them to peak for their shot at an Olympic medal.”

Bright comments how once the triathlon action is complete, the athletes will be able to fully enjoy the experience of being at the Olympic Games.

“As sports fans as well as athletes, for them to be at the Olympic Games and be around other top athletes in the village, watching Olympic sports and being at the Closing Ceremony will be such an amazing environment for them to be in once their racing is complete," Bright concluded.

They may not remember their race in 15 years-time, but they will remember the atmosphere and the environment of being there.”