Knutsford Tri Club win the race from Corona to Kona

Triathlon clubs from across Britain have raced virtually from Manchester to Kona, Hawaii in a team duathlon challenge to raise money for local charities.

Each year, Kona hosts the IRONMAN World Championships and, with Mel having competed there in 2019, Smiling Tri coaches, Kate Offord and Mel Hayes from Manchester, decided that there was another challenge that Kona could offer.

“Mel and I knew we needed to act fast to lift the spirits of our athletes,” said Offord once the government lockdown was imposed.

“During a Zoom meeting we came up with the idea of a big virtual challenge,” she added. “Splitting into teams and logging distances run or cycled as part of a point-to-point race.” 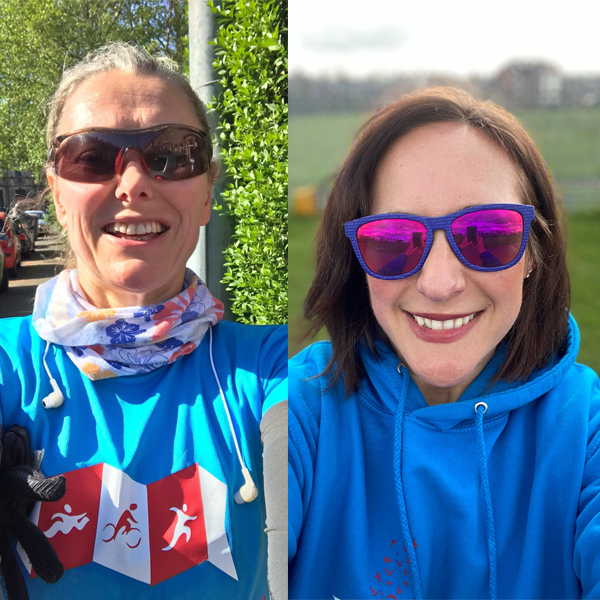 Above: Mel and Kate from Smiling Tri created the Corona to Kona challenge

The Corona to Kona challenge was born, a team duathlon to run the 2,311km from Manchester to Jalon in Spain, before cycling the 13,000km onward distance to Kona all from their homes and local areas.

A total of 18 teams from across the UK and 570 athletes signed up to take part, with some taking part from homes in Saudi Arabia, South Africa and USA.

The overall challenge is raising money for local Manchester charities who have lost fundraising streams during the crisis. Kate and Mel have sold 295 #CoronatoKona charity t-shirts and set up a separate fundraising page for the race. You can donate here.

The first team to complete the distance to Kona was Knutsford Tri Club who stormed to victory, putting in some big virtual group rides to clock-up the distance.

Club coach Vicky McKinnon said: “The vast majority of the team have contributed to both run and bike every single day for the last week. From a relatively steady first day, finishing in the top three, the team smelt victory as a possibility.

“Zwift and Zoom combined, and nearly half of the team turboed over six hours from Knutsford, Cheshire to Abersoch, North Wales for our annual ride.

“Not put off with the current restrictions, this was all cycled indoors and a good number also started walking laps of their garden.”

TFN Tri Club from Nottingham were one of the clubs to sign up, entering two teams of 28 members having joined forces with HPP running club.

Jo Mallinson from TFN said: “It's great to bring everyone together and contribute to an event as a whole club. This is extremely important now we can't have club sessions; it gives people a sense of being in a community while still social distancing.”

The competition is high, with Smiling Tri posting the total distance covered by each team on their Facebook page daily, allowing each club to track and compare their total as they aimed to reach the finish line first.

“Our two teams are competitive with each other,” added Mallinson. “More importantly however, is that as a club, we can beat local rivals Derby Tri and Belper 10:20.”

These four teams are currently still battling it out in the race to Kona as they seek the local bragging rights.

Despite the competition, all teams united in their fundraising efforts for their local charities through this difficult time. Something that thrilled Offord and Hayes as the organisers.

“It’s a fabulous representation of people coming together through this crisis and making a positive out of a negative and supporting each other. The camaraderie is phenomenal.”

Teams had to adhere to government guidelines, seeing them take to their indoor cycling set ups and treadmills, as well as using their once-a-day outside exercise.

TFN’s aim has been to raise £1,000 for a cross trainer for the Cancer Patient Ward at Nottingham City Hospital through their journey to Kona and are over halfway there. You can donate here.

IRONMAN athlete and consultant oncologist at Nottingham City Hospital, Lucy Gossage, said: “there is now good evidence that being active during cancer treatment is safer than being inactive. However, opportunities to stay active in hospital are limited.

“We are hoping to buy an outdoor cross trainer and some waterproof covers so that patients can stay active together while staying in hospital for treatment.”

To find out more about the Corona to Kona challenge and see how your local club is getting on and what they’re fundraising for, click on the Smiling Tri link below.

The full list of teams taking part in the challenge is: