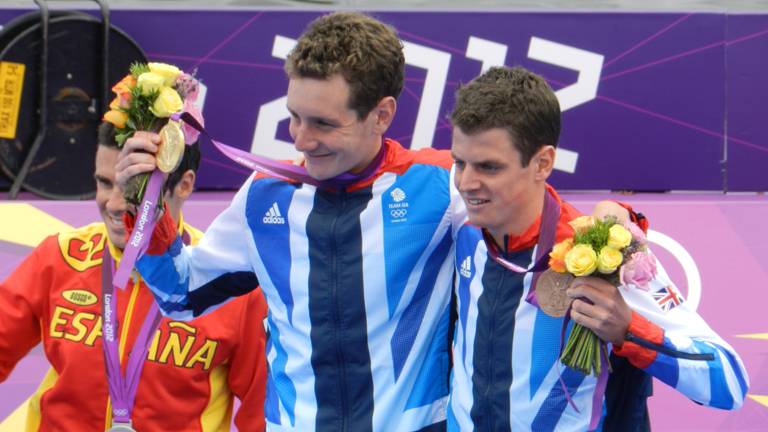 Mark Buckingham celebrated the victory amongst challenging conditions that saw the junior women’s and both senior races change to a 10km run due to weather and continuing high winds.
Mark completed the 10km in a provisional winning time of 31.10 and was delighted with the win commenting: “It feels great to win – I’m really happy with how it all went. Obviously, we all came here to do a duathlon but the weather just wasn’t on our side. Coming from a running background, I guess it helps me, but knowing Adam Bowden was in the race, it’s still a level playing field. We’re big rivals and great friends – we have been for a number of years - so we had a good tussle.”
Adam finished in second place with David Bishop in third. Finish times are currently waiting to be confirmed.
The win follows Mark’s second place finish at the ETU Triathlon European Cup in Quarteira last weekend and the UK Sport Lottery funded athlete is looking forward to maintaining his early season form: “I started my season early in Abu Dhabi in March, so I’m going to use April for a good period of training. I have three or four weeks where I won’t be racing, so I’m going to use that time to build up to the Yokohama World Triathlon Series race.”
In the women’s event, Emma Pallant took the chequered flag for the second year in succession at the Rockingham Motor Racing Circuit in a time of 37.07. The 2014 British Triathlon Super Series Champion was followed across the line by last year’s Super Series runner-up India Lee who finished just four-seconds behind in 37.11. Third place went to Chloe Cook who completed the 10km in 37.27.
Emma was disappointed with the race change, but was pleased to get the domestic season off to a winning start commenting: “I was a little bit disappointed about it just being a run today. I’ve been working hard out in Spain at a training camp and my bike’s the thing we’ve been focussing on a lot,  so it’s a bit of a shame about that, but with the conditions there was no way you could bike out there. I just sat in on the run as I wanted to qualify for the World Duathlon and left it down to a sprint finish - job done.”
In the paraduathlon races, Joe Townsend (PT1) defended his title after crossing the line first in a winning time 01:05.25.  Joe commented after crossing the line: “I am really happy with today. It’s been a slow start to the season after recovering from surgery on my shoulder. Today, I just wanted to deliver a good performance and have a good indicator as to where I’m at performance wise.”
In the women’s races, Lizzie Tench won the PT1 category in a time of 01:32.09 with World Paratriathlon Champion, Lauren Steadman (PT4) adding another title to her name winning gold in the PT4 category in 01:17.37.
In the British Elite Junior Duathlon Championships, the first race of the British Triathlon Youth and Junior Super Series, Ben Dijkstra won the junior men’s event in 59.34. Samuel Dickinson was second with a time of 59:59 and Jimmy Kershaw finished third in 1:01:00.
Ben commented after his second win in successive weekends: “It’s great – I won this event last year so I knew I was coming into it knowing I was one of the stronger lads. The conditions weren’t really ideal today – a lot of wind and spray, so I had to be really careful. I knew what I had to do and I’m just over the moon with the result.”
In the junior women’s event, Kate Waugh celebrated winning the opening title of the season crossing the line in a time of 38.02. Mary Hodgson was second with a time of 38.16 and Sian Rainsley finished third in 39.41.
Kate commented: “It was interesting – a little different than I expected, having to run a 10km instead of a Duathlon. It was good race though, except for the wind in your face on the uphill section.”
Asked about her plans for the season, she continued: “Obviously I’m still a youth – so stepping up an age-group here. I’ve got the British Youth Series to look forward to this season and I’d like to qualify for the Youth Relays.”
Issy Morris won the girl’s youth race, which was also the opening round of the British Youth Super Series, with a time of 31.01. Emma Clapton was second in 32.09 and Caitlin Roper finished third with a time of 32.20.
Tomos Nesham won the youth boy’s race with a winning time of 29.43. Travis Bramley was second in 29.48 and Gregor Malcolm finished third with a time of 29.56.
Tomas commented: “It feels amazing. It’s my first ever National Duathlon and so to win it is indescribable.
“Coming out of some of the hairpin bends was really slippy but I managed to keep on my bike luckily.  Obviously things like that lose you bits of time, but it’s the same for everyone.
“I honestly wasn’t expecting to do so well at all – I didn’t know what the competition was like or how I was going to compare. Now I’ve got the rest of the British Series to look forward to!”