Rio Medallist Encourages Beginners To Give Triathlon A Go

The triathlon first-timers used the #YourGOTRI website www.gotri.org/yourgotri  to create and complete their own triathlons and received tips on how to get the most out of their triathlon experience from Olympic bronze medallist, Vicky Holland.

Vicky and the team at British Triathlon are set to turn ‘inspiration into participation’ with the interactive #YourGOTRI campaign which enables new participants to create their own triathlon. At www.gotri.org/yourgotri people can select a swim, cycle and run from options including a “trip to the pool”, “pedal in the park”, and “jog round the block”. There’s even an option to “row in the gym” instead of swim. Participants will then be supported with tips and training plans from the experts at British Triathlon. 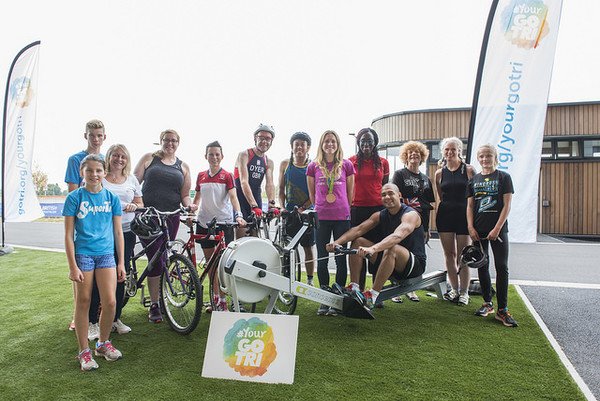 Above: Vicky Holland inspires the nation to get active by creating their very own triathlon.

Almost 5 million people tuned into to watch the Olympic triathlon races on the BBC, with 136,000 unique pageviews on the British Triathlon website to find out more about the sport. Over the 48-hour Olympic Triathlon “moment” registrations to GO TRI, triathlon’s low cost, fun and accessible route into triathlon, grew 516% compared to previous months.

The sport has seen steady growth since London 2012, with the number of triathlon events has increasing by 63% from 2012 to 2016, with on average 24 events per week across Great Britain. Growth has been seen across all demographics, particularly amongst women, and 169% growth amongst young people aged 16-18.

Vicky Holland says; “It’s already clear that our performances in Rio have inspired more people to get inspired in our sport. As an athlete it’s really exciting to be able to support more people getting active in our sport. I hope through sessions like today and through programmes like #YourGOTRI, so many more people get out there and give it a try.”

Natalie Justice-Dearn, Participation Director at British Triathlon says; “Major events like the Rio 2016 Olympic Games provide a unique moment in time where we can turn inspiration into participation, and we have challenged ourselves to use this opportunity to keep the momentum going for the long term. We are excited to be working closely with our athletes and the triathlon industry to open the sport’s doors to a whole new audience.”

Three weeks into the eight-week campaign, sign-ups are on track, and through PR and social media the campaign has already reached over 46,000,000 people across Britain and internationally.

Visit www.gotri.org/yourgotri to create your triathlon, and to find out more about how you can get into the sport.