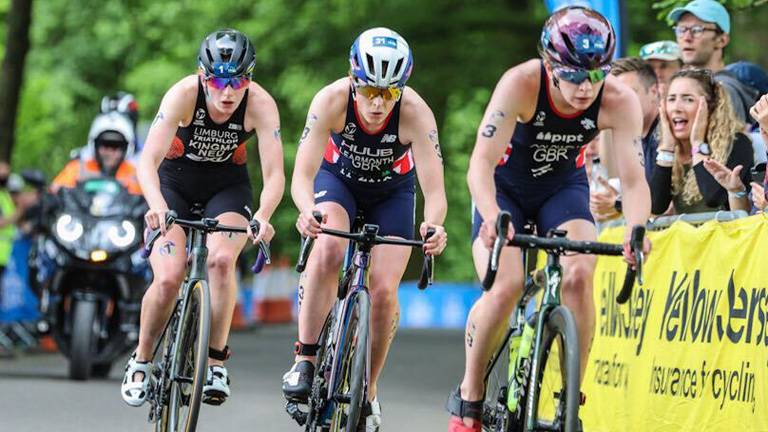 Silver for Under 23 Mixed Relay

The Under 23 Mixed Relay team which featured Olivia Mathias, Ben Djikstra, Kate Waugh and Alex Yee won silver to off a fantastic weekend for British Triathlon at the ITU Grand Final.

Mathias, who won silver in the U23 individual race, led off the team and left the swim with three athletes and came out of T1 in second place.

On the bike leg, Mathias was part of the lead pack with a five-second lead on the chase pack before exiting T2 in the lead.

She handed over to Djikstra in third place who put in an excellent swim leg to stay within contention with the lead of the race.

Djikstra left T2 in third place before showcasing his strength in the run to hand over to Waugh in the lead.

Waugh looked strong throughout the swim and bike and took on the run hard to pass over to Yee in second place.

The weather changed in leg four of the relay and Yee had to contend with wet weather and due an issue with his shoe he dropped down the rankings.

Yee took on Hayden Wilde (New Zealand) in the run and it was Wilde who had the extra power in his legs to take the win.

“It’s really to cool to have won a second medal at this competition,” Mathias said. “It was so hard, and it hurt from the go to the end but I really enjoyed it.”

“We are all over the moon with the result,” Djikstra said. “To come away with a silver here and I couldn’t have done it with a better team. My leg was painful, and I just pushed through on the run. When you have a good team you just find something else to give. We pulled a silver out the bag.”

“It was really hard,” Waugh said. “I wanted to do well for the team, and I am buzzing to have won a medal together. The support around the course was amazing.”

Yee concluded: “I really enjoyed it and the team put me in such a good position going into the last leg. They were unbelievable and I’m really pleased to bring it home for second. The weather took a turn and it made for interesting racing and it made for an exciting end to the Grand Final.”