With two races on the calendar and a world champion crowned, 2018 was a year to savour for Britain and British athletes on the World Triathlon Series (WTS).

Having won the series for the previous two years, Spain’s Mario Mola and Bermuda’s Flora Duffy headed to the first race of the year in Abu Dhabi with high hopes of securing a hattrick of wins.

They were uncharacteristically cold and wet conditions in the UAE as the athletes competed over a sprint distance in 2018. Britain’s Jess Learmonth was part of a lead front group coming out of the water in the women’s race, a position which she maintained on the bike.

Above: Jessica Learmonth came second in the first race of the year in Abu Dhabi.

Duffy turned her bike leg into a time trial, going off on her own until the slippery conditions of the Formula 1 track saw her slip and retire from the race for mechanical reasons. In an identical slip, new race leader Katie Zaferes (USA) also retired injured leaving the race wide open behind her.

Onto the run and a top four soon emerged to fight for the three medals. Rachel Klamer (NED), Learmonth, Kirsten Kasper (USA) and Natalie van Coevorden (AUS) all battled it out, with a penalty for the American (which was later overturned) seeing her miss out on the podium as Klamer broke free to win, with Learmonth second.

The men’s race proved less dramatic with South African Henri Schoeman claiming the lead out of the swim which he would maintain and build on his way to victory. Schoeman also won gold in the 2018 Commonwealth Games on the Gold Coast.

Mola (ESP) came home in second having made up ground throughout the race, and Vincent Luis (FRA) beat his compatriot Leo Bergere on the run to take bronze.

Britain’s Jonathan Brownlee finished in seventh having been one of the front group exiting the swim. A crash on the bike leg saw him fall back through the field before climbing his way back into the top 10.

There were no British men on the start line as the WTS made its way to the island of Bermuda for the first time. In what was an exciting race, Norwegian Casper Stornes broke free on the bike leg and no one could catch him.

His compatriots Kristian Blummenfelt and Gustav Iden were next across the line to secure Norway the first clean sweep in WTS history. 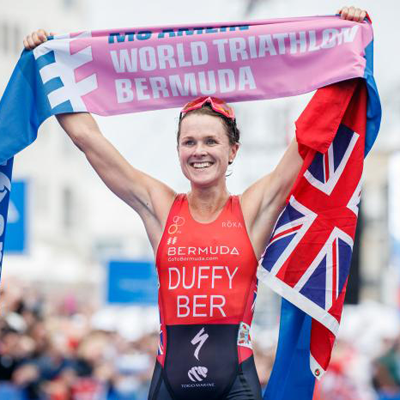 In the women’s race, three athletes received a penalty for a false start including Britain’s Georgia Taylor-Brown. On the restart, local hero Flora Duffy soon established herself in the lead.

By the time she’d completed the 40km bike, her lead was almost 90 seconds on the chase group which included Vicky Holland and Jodie Stimpson (GBR) and America’s Zaferes.

As Duffy completed her parade to victory, a battle was emerging between Holland and Zaferes for second. The Brit took it on the line as the pair sprinted down the finish straight.

The WTS rolled into Yokohama, Japan for the third leg of the 2018 series with Stimpson and Non Stanford the only British women to take part.

Duffy (BER) and Zaferes (USA) led the women onto the bike, but the chase group including the two Brits soon caught them up. This group stayed together all the way through to the run with Stimpson at the front leaving T2.

As the run progressed, the Bermudan broke free to take the lead with Zaferes coming second 30 seconds behind. As Stimpson fell back through the field, Stanford pushed on to take a well-earned third place finish and first podium in two years having had a period away due to injury.

In the men’s race it was all very compact with the majority of the field all coming out of the water and onto the bike in a group together. This group remained and it wasn’t until the run leg that it started to spread.

Mola (ESP) quickly made his way to the front with Jacob Birtwhistle (AUS) and fellow countryman Fernando Alarza a little further behind. Mola claimed his first victory of that year’s series, whilst Birtwhistle just had enough left in the tank to clinch second in the final few hundred metres.

Grant Sheldon was the highest finisher in the men’s race in 18th place. Tom Bishop was 24thand Marc Austin 47th.

Next up saw the first of the British double-header as Accenture World Triathlon Mixed Relay Nottingham made its debut and was the first race on the inaugural World Mixed Relay Series.

With the newest form of triathlon entering the Olympics in Tokyo, there were qualification points as well as bragging rights on offer. Despite dominating the first two legs of the race, the team from France finished third with the USA’s third athlete Zaferes claiming the lead which they held to the finish.

Stanford, Bishop, Holland and Jonathan Brownlee raced for Britain, securing the silver medal on the banks of the River Trent.

Mola (ESP) was racing in Leeds for the first time and started as favourite with defending champion, Alistair Brownlee, not racing. Younger brother Jonathan was flying the flag for the Brownlees, however had to pull out part way through feeling ill.

It was Richard Murray who powered home to victory however, the South African who was first out of T2 left the field in his wake on the run. Not even Murray’s former training partner Mola could catch him as he maintained the series lead by finishing second.

Tom Bishop was the highest place Brit as he impressed the home crowd to finish sixth.

There was more British interest in the women’s race with five athletes (Holland, Learmonth, Stimpson, Taylor-Brown and Sophie Coldwell) representing the host nation. 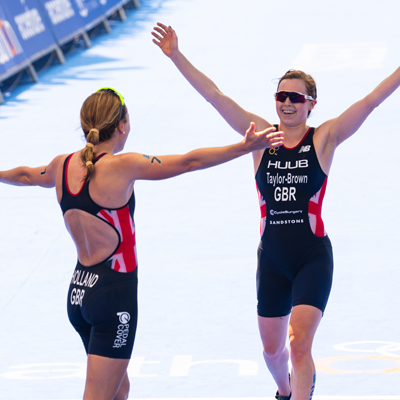 Above: Holland and Taylor-Brown took first and second in Leeds in 2018

At one stage on the run it looked like Holland, Taylor-Brown and Coldwell might secure a clean sweep on the Millennium Square podium, however the then 23-year-old couldn’t hang on and fell back.

Holland pulled clear on the second part of the run with Taylor-Brown claiming silver and Zaferes (USA) battling through to take bronze and the overall series lead from the not-racing Flora Duffy (BER).

The action stayed in Europe as the athletes moved on to Hamburg. Jonathan Brownlee looked in good form throughout the race as part of a leading group of three in the German city throughout the swim and bike legs.

However, on the run, Spain’s Mola again showed his class and why he was the one to beat that year. Making his way up to join the front three, he soon took the lead and Brownlee, who tried to go with him, paid the price to finish fourth behind Luis (FRA) and Murray (RSA).

Once again there were five British women racing and all of them secured a finish in the top half of the field in Hamburg.

As she did so often that year, Jess Learmonth led out of the swim and was part of the lead group as the athletes made their way out onto the 20km bike in this sprint race. Taylor-Brown and Duffy were also among the six athletes at the front with her. 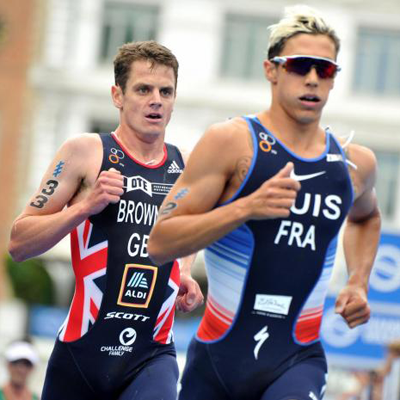 Above: Jonathan Brownlee secured his highest finish of the 2018 WTS in Hamburg. C: Janos Schmidt

The chasers caught up however and , on the run, Beaugrand of France strode away from the rest to win by 30 seconds. Stanford and Stimpson finished 6th and  7th respectively for Great Britain, with Taylor-Brown 11th and Learmonth 14th.

Hamburg also hosted the Mixed Relay World Championships. Great Britain were competitive throughout the race, however Beaugrand and Zaferes (USA) showed their running strength to build a lead before handing over to their final athletes.

France took the tape to secure victory, whilst behind him Jacob Birtwhistle (AUS) had sped passed Tom Bishop (GBR) and overtook the USA to secure silver for Australia. Great Britain finishing in fourth with a team of Holland, Jonathan Brownlee, Stanford and Bishop.

With the Grand Final due to be hosted on the Gold Coast, five months after the Commonwealth Games had been at the same venue, the WTS headed to Canada for a double header before travelling down under.

The first of the Canadian races was in Edmonton where the athletes would race over a sprint distance, followed by a mixed relay the day after.

Vicky Holland arrived in the Alberta capital looking to make a dent in the lead that USA’s Katie Zaferes had in the overall standings. Defending champion Flora Duffy (BER) was out injured, leaving the American in pole position to secure the series title.

The women’s race once again proved to be a close battle, with the lead changing hands multiple times throughout.

Despite a small lead group exiting the water together, this soon developed into a group of about twenty athletes racing together midway through the bike leg.

As the group completed the bike, there were four British athletes and looking to push on through the run. It wasn’t long before Holland, Jess Learmonth, Jodie Stimpson and Georgia Taylor-Brown were racing at the front alongside Ashleigh Gentle of Australia.

In the final stages of the last lap, Holland broke free of Gentle (2nd) and Taylor-Brown (3rd) to take the tape having moved away from Learmonth (4th) and Stimpson (5th).

Zaferes still held the overall lead but, with her second victory of the year, Holland was catching up.

The men’s event saw Jonathan Brownlee finish fifth having been outsprinted by Spain’s Fernando Alarza (4th) and Jacob Birtwhistle (3rd) of Australia in the closing stages.

In the mixed relay, Learmonth, Brownlee and Taylor-Brown were joined by Christopher Perham in what proved to be a very tight race.

Having been in the lead pack for the first to legs of the race, Taylor-Brown decided to put her foot down to hand over to Perham with Britain in the lead however, up against Birtwhsitle, Matthew McElroy (USA) and Haydn Wilde (NZL), the field soon caught up.

Britain finished sixth but less than 40 seconds behind Australia who came first.

The penultimate race of the year saw athletes move east from Alberta to Quebec to race in Montreal.

The men’s race saw the familiar faces of Mola (ESP), Blummenfelt (NOR) and Murray (RSA) finish on the top steps of the podium, with the Spaniard claiming his fourth victory of the year.

Having finished with four of the top five places in the previous race, Britain’s women had high hopes of securing more of the same in this standard distance race.

Faltering on the start as the others dived in, Vicky Holland soon found herself a long way behind the leaders as she swam off-course. 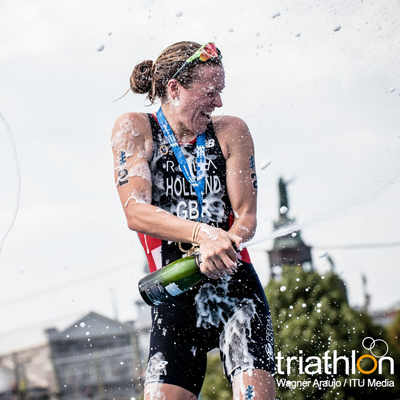 Above: Holland set up a showdown with Zaferes at the Grand Final for the overall series

This didn’t phase her however as she showed her strength on the bike to catch up and, by the time the 40km bike leg was over, was one of five British athletes in the top-10. Sophie Coldwell racing in Montreal having not raced in Edmonton.

On the run, Holland showed she’s as good on two feet as she is on two wheels to take the lead, something she wouldn’t surrender to secure her third win of the season.

Taylor-Brown once again finished in third, with series leader Katie Zaferes (USA) in second. Her lead over Holland now just 34 points, with only the Grand Final to come.

With Mario Mola all but tying up the men’s series for a third successive year, it was all to play for in the women’s series as the athletes headed to the Gold Coast.