The 2018 Grand Final took place on Australia’s Gold Coast and, with Vicky Holland well placed in the women’s World Triathlon Series, Britain could be about to see its first female series winner since 2013.

With seven rounds of the World Triathlon Series (WTS) complete, there were only 34 points separating Holland and Katie Zaferes (USA) who sat at the top of the overall standings. The race on the Gold Coast would be a show down between the two to decide the series winner.

Showing the all-round strength of women’s racing in Britain, Georgia Taylor-Brown sat third and with her eyes firmly set on securing her first WTS overall podium finish. Jessica Learmonth sat in fourth, with Jodie Stimpson also in the series top 10 in sixth place.

A field of 58 saw a congested swim as the athletes jockeyed for position. Picking up the bike for the 40km cycle, Holland was in the lead pack alongside Zaferes, Learmonth, Sophie Coldwell (GBR) and Kirsten Kasper (USA).

Above: Vicky Holland goes for the series win on the Gold Coast

With just under 18km remaining on the bike, the chasers caught up to see 29 women all cycling together in the Melbourne sunshine. This large group arrived in T2 together, quickly racking their bikes, removing their helmets and donning their trainers.

Holland and Zaferes broke away with Australia’s Ashleigh Gentle for company, with the Aussie looking to claim victory on home soil.

Zaferes tried to make a break, however both stayed with her as she pushed. This proved to be to Holland’s advantage as she and Gentle were able to pull away from the American and sprint for the line.

Both athletes had something to cheer as Gentle won the race with Holland securing the main prize and winning her first World Triathlon Series title.

After the race, Holland said: “I’ve just really enjoyed my racing. When you turn up to a race feeling confident and happy there’s not too much that can go wrong. I really wanted it, and I’m so glad I got it at the end.” 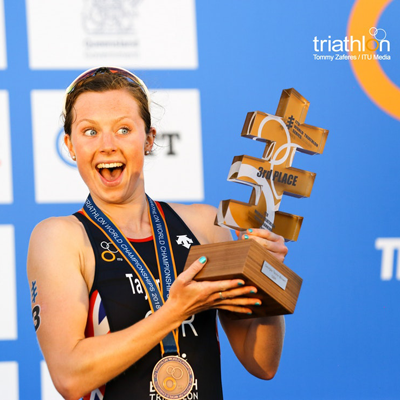 An eighth-place finish was enough to see Taylor-Brown win third overall, with Learmonth and Stimpson finishing the series in fifth and seventh respectively.

In the men’s race, the overall series was securely in the hands of Mario Mola. The Spaniard simply needed a 14th place finish or better to win the World Triathlon Series for the third successive year.

British interest in the race saw Tom Bishop race alongside both Alistair and Jonathan Brownlee, however, Alistair was disqualified for not making it around the first buoy on the swim as athletes battled for position.

There were multiple breakaways on the bike as athletes tried to open up a gap for themselves, however it was Kristian Blummenfelt who made the telling break to head out onto the run first with a 35 second advantage.

About halfway through the 10km run he was caught however, with Mola, Vincent Luis (FRA) and Richard Murray (RSA) among the group to move past him.

Luis held on to take the lead and win the race, with Mola finishing second and winning the overall series title by over 1000 points from Luis.

Jonathan Brownlee finished 8th in the race to see him end the year in 11th place.

The Grand Final is about more than just the WTS, however. Also racing on the Gold Coast were U23 and Junior athletes in individual races and also in a combined mixed relay.

In the Men’s U23 race, Alec Wilimovsky (USA) led the athletes out of the water, however, was overtaken by New Zealand’s Tayler Reid in T1. Out on the bike course, Britain’s Sam Dickinson was part of a large lead group with Alex Yee and Barclay Izzard in the chasing groups. 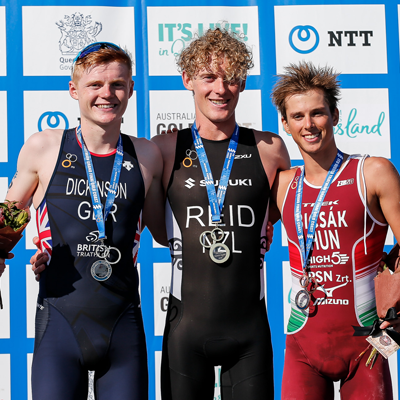 Above: Sam Dickinson took silver in the Men's U23 race

With a 92 second advantage, the lead group arrived in T2 and set off on the run. Dickinson, Reid and Leo Bergere (FRA) quickly broke away in pursuit of the medals. With 2km to go, Reid pushed to take the tape and Dickinson crossed the line in second, with Hungary’s Bence Bicsak passing Bergere on the finish straight to take third. Yee came home in 10th, with Izzard in 15th.

Alden led the swimmers out of the water; however, it was Knibb who soon took control on the bike to break free of the chasers to arrive in T2 three minutes ahead of them. Her lead was unassailable, with Beaugrand and Angelica Olmo (ITA) second and third.

Having been part of the chase group throughout, Mathias crossed the line in 13th with Rainsley 15th. Alden finished in 23rd.

Competing over a sprint distance on the Gold Coast, British athletes also took part in the Junior races. In what was a competitive men’s race in which Csongor Lehmann of Hungary took the gold, Britain’s Matthew Willis, Daniel Slater and James Chantler-Mayne finished 18th, 22nd and 29th respectively.

Despite having a 20 second gap to make up from the swim, Erin Wallace (GBR) and Kate Waugh (GBR) soon made their way to join the front riders on the first lap of the bike in the Junior Women’s race.

Above: Highlights from the Junior Women's race in 2018

The British duo set the pace on the run, with a large chase group battling across the 5km course. Mexico’s Ramirez Alvarez stormed through the field to get amongst the Brits and claim the win, with Wallace finishing second and Waugh coming home in third. Iona Miller also came in 34th for Britain.

In the combined Junior and U23 Mixed Relay, the British team of Olivia Mathias, Daniel Slater, Sophie Coldwell and Matthew Willis claimed the bronze medal having been promoted from fourth following New Zealand’s disqualification.

Mathias put Britain in the lead group of 12 as the first of the team on the course. A strong bike leg established her there, a position she held onto to hand over to Slater. It was during the second leg that the athletes from Germany, France and New Zealand pulled to the front.

Slater kept as part of the group to hand over to Coldwell only 30 seconds back.  Working with Hedgeland (AUS), Coldwell pulled up into fourth and exited T2 having cut the gap to 13 seconds and pulled away from the Australian on the run. 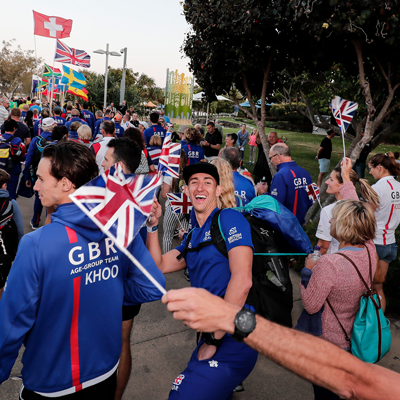 Above: The GB Age-Group Team headed to Australia in search of gold

Willis set off as the final athlete from Great Britain, hoping to chase down the leaders and get the team on the podium.

France claimed the win on a photo finish from New Zealand, with Germany third however, following the New Zealand disqualification Britain took the final podium place.

The Grand Final also hosted the Age-Group World Championships for the sprint and standard distance. The team won seven gold medals in the sprint, including for James Hodgson (M20-24) and Mary Anstey (F80-84).

In the standard distance race, a further three golds were added and saw Edward Castro complete a double gold swoop having also won the M30-34 category in the sprint.

You can read reports from both races below.