The season may not have brought too much cheer for British triathletes, but there was plenty to celebrate across the 2017 ITU Grand Final in Rotterdam.

This was the first time that the city had hosted a World Triathlon Series (WTS) event and brought six months of action to a close.

Flora Duffy (BER) and Mario Mola (ESP) were in pole position to retain their WTS titles from 2016, but there was still plenty of British interest across the WTS and U23 and Junior World Championships.

In the women’s WTS race, Britain’s two medallists from the series so far, Jodie Stimpson and Jess Learmonth, both raced alongside Lucy Hall.

As she had since making her WTS debut earlier that year, Learmonth showed her strength through the water to be the first athlete out of the 1500m swim, hotly pursued by Duffy and Routier (ESP).

Once out on the bike, it was Learmonth, Duffy and Katie Zaferes (USA) who created a breakaway group. The trio had done the same in the previous race in Stockholm and within a couple of kilometres had established a lead of 30 seconds over the chasing group.

On a wet course following days of rain in the Dutch city, the three navigated the bike together before spreading out on the run. Despite making the faster transition, Zaferes was quickly passed by Duffy who raced clear to win 55 seconds ahead of the American. 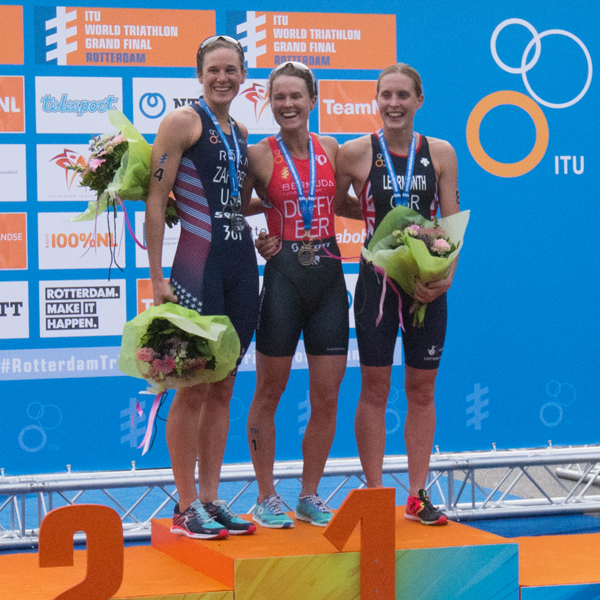 Above: Learmonth took her second consecutive WTS medal in 2017

Learmonth ran well to maintain a lead that she’d built up over the chasers through her swim and bike to claim her second consecutive medal by finishing third.

Returning from a lengthy period of injury, Stimpson raced home to eighth with Hall suffering a DNF on the bike course.

In the men’s race, Jonathan Brownlee and Tom Bishop were looking to add to the medals they’d collected so far on the series and raced with Marc Austin and Adam Bowden for Great Britain.

With Mario Mola (ESP) and Javier Gomez (ESP) first and second in the overall standings, the WTS title was set to be won by a Spaniard for the fifth year in a row. Mola needing a fifth-place finish or higher to make it back-to-back series wins, something only Gomez had done before.

As the athletes made their way out of T1 and onto the bike, a group of ten, including Brownlee, had established a lead, however it wasn’t enough and, after 10km or so, this became a large group of athletes.

Brownlee, who had missed a lot of the series through injury and illness, set the early pace on the run with Bishop not far behind however, as they made their way around the 10km course, Brownlee dropped away. 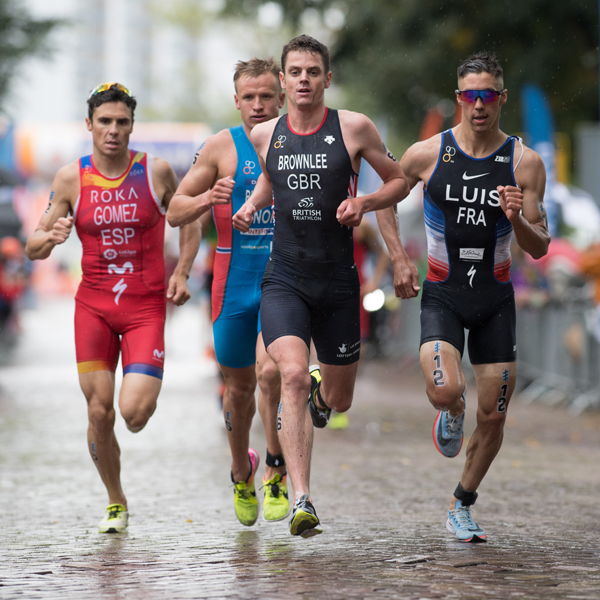 Above: Brownlee was the highest placed Brit in 5th

Vincent Luis (FRA) took charge and sprinted for the line, with Kristian Blummenfelt (NOR) second and the 2017 WTS men’s champion, Mola, came third just ahead of Gomez.

Brownlee and Bishop both secured top-ten finishes, 5th and 10th respectively, with Austin and Bowden 22nd and 24th.

The Grand Final also gives the stage to the best up-and-coming athletes with the U23 and Junior World Championships also taking place at the event.

Coldwell was the second athlete out onto the bike course following a fast swim, cycling as part of an early lead group of seven.

This seven grew and changed through the bike leg, with all three Brits riding at the front of the race and making their way through T2 and onto the run amongst the leaders.

Coldwell set out quickly to make her mark on the run, with Tamara Gorman (USA) going with her stride-for-stride before taking the lead and the win. Portuguese athlete, Melanie Santos, passed Coldwell to take silver, with the Brit finishing strongly for bronze. 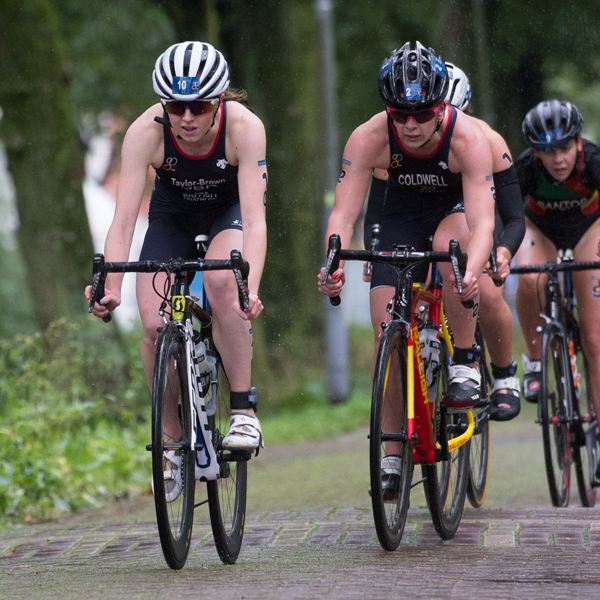 Above: Coldwell and Taylor-Brown finished 3rd and 4th in Rotterdam

Taylor-Brown passed a number of athletes on the run to finish just behind her compatriot in fourth, whilst Rainsley also raced competitively to a ninth-place finish.

Having not made it into the early breakaway group on the bike, Benson and the rest of the chasing pack were soon cycling as one big lead group, pushing the pace together until two French athletes broke away together.

Leo Bergere and Dorian Coninx pushed hard to create themselves a small advantage coming through T2 and out onto the run over Benson and the rest of the group.

They weren’t able to hold onto their lead however, as compatriot Montoya and Australian Willian joined them. Bergere fell away to leave the three leading athletes, however a penalty for the Australian saw him drop back.

Despite his best efforts he couldn’t catch the two French athletes, with Montoya outsprinting Coninx to win. Willian finished third, with Benson seventh. Johnson and Dickinson finished 24th and 26th for Great Britain.

The three young Brits were all among the top-ten athletes into T1 following the swim, with Alden leading the chase behind Sega of Japan.

Out on the bike, the Japanese athlete and American, Taylor Knibb, established themselves a lead early on, with Mathias and Waugh part of the front group of chasers trying to bridge the gap. 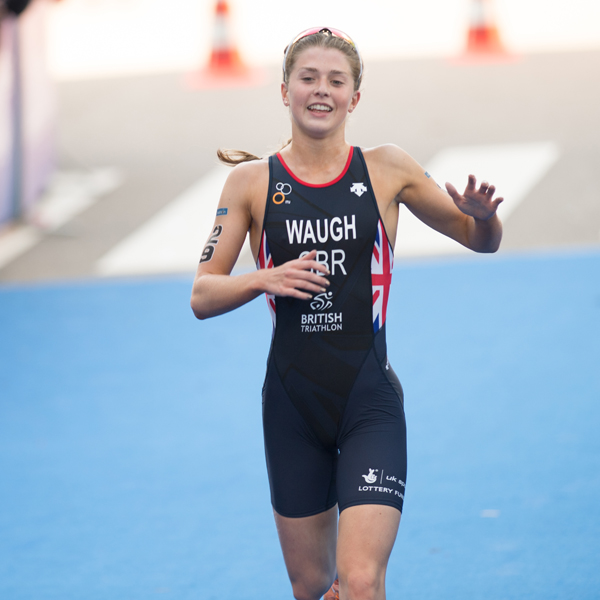 Above: Waugh ran her way to second place in 2017

Knibb was the first athlete into T2 and onto the run, as Sega was caught by the chasers to see a foot race ensue for the second and third places on the podium.

Waugh produced the fastest run time of the day to make second her own and take twenty seconds out of the American’s lead. Sega (JPN) finished well to take the bronze, with Mathias finishing in 6th a little further back. Alden crossed the line in 29th.

Chantler-Mayne was the fastest of the British athletes in the swim and cycled with the leaders through the technical course as Dijkstra and Izzard rode as part of a chase group of five trying to hunt them down.

Coming out of T2, Dijkstra led the charge from the chasing pack as the field spread out. It wasn’t long before he passed a number of the front runners including Chantler-Mayne and set his eyes on catching Hauser (AUS) and Vilaca (POR). 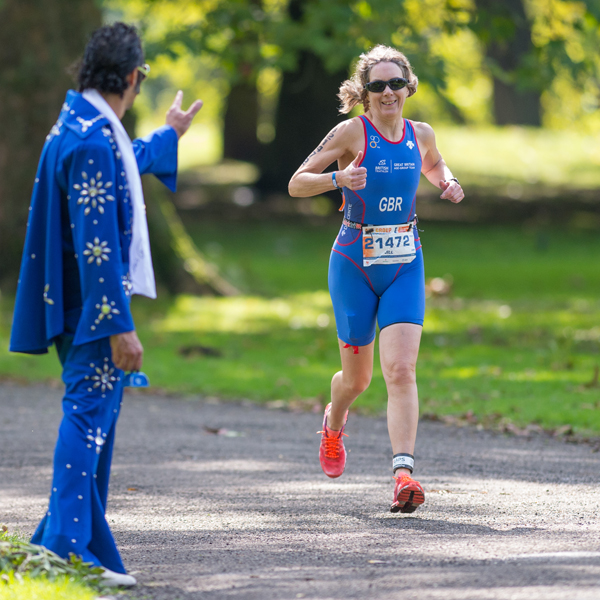 Above: The Great Britain Age-Group Team was well represented in Rotterdam

The pair had enough of a lead to stay ahead of the Brit as he made it two World Championship bronzes in two years. Chantler-Mayne rounded off a strong race with a fourth-place finish, with Izzard finishing three seconds back in sixth.

Racing alongside the elite athletes were the Great Britain Age-Group Team for the Sprint and Standard Distance World Championships.

In the standard distance, Sarah Barrett (F70-74) backed up her win in the F60-69 category the year before, with gold in Rotterdam as one of five world champions for the team.