Featuring nine events across six different continents, 2016 saw plenty of British athletes stand on the podium and introduced Leeds as the home of the World Triathlon Series in Britain.

Abu Dhabi played host to the curtain raiser of the World Triathlon Series (WTS) for the second year in a row in 2016, however in a change from 2015 was raced over a standard rather than sprint distance.

Above: Highlights of the opening women's race in Abu Dhabi.

The racing, which took place along the Corniche in the west of the UAE capital city,  witnessed a very tight women’s race which saw a large pack form on the bike before a crash just before second transition take down a significant number from the group.

On the run, Jodie Stimpson and Helen Jenkins battled it out with Flora Duffy (BER) and Ashleigh Gentle (AUS), before Stimpson pulled away to claim her first WTS victory since 2014, with Jenkins finishing third.

The first British male podium of 2016 was claimed by Jonathan Brownlee at the second race of the season on the Gold Coast. The younger of the Brownlee brothers, Jonathan took the bronze medal in Australia, one of six medals he would collect on his way to second place in the overall standings. 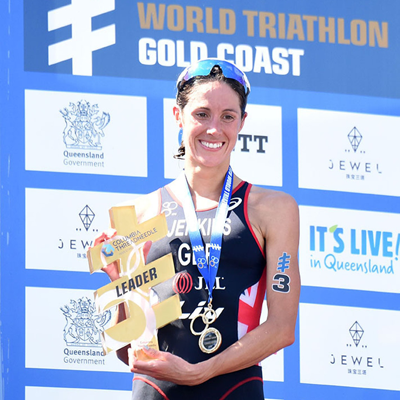 Having finished third in Abu Dhabi, it was Jenkins who took the gold this time around to make it two from two for Great Britain in the women’s series. The former double world champion took the initiative as soon as she started the run and finished over 40 seconds clear of second place.

Cape Town, South Africa welcomed athletes for the third leg of the series and the first of three sprint distance races in 2016.

For the third race in a row a British woman topped the podium, this time with Non Stanford taking the top spot and Stimpson joining her in second place. Her first race since the Grand Final in 2015, Stanford led throughout the run leg to claim the victory.

Improving on his bronze medal last time out, Brownlee took silver in Cape Town. Having been pipped to the line in Australia by Fernando Alarza (ESP), it was the Spaniard once again who he battled with, alongside Dorian Coninx of France who came home in third.

The fourth leg of the series took athletes to Japan, where Mario Mola took his third gold of the year. He would eventually claim the overall series win, his first of three consecutive titles.

Defending series champion Gwen Jorgensen claimed victory in the women’s race to become the first non-Brit to stand atop the female podium.

In June, the World Triathlon Series headed to Leeds for the first time, as the British race moved to Yorkshire from London.

Above: The first WTS race in Leeds saw a Brownlee one-two for Great Britain.

Home to Jonathan and older brother Alistair, the city was already a well-known landmark on the triathlon map, and it was the two brothers who shone in front of the home crowd, with the densely lined streets cheering them to a one-two finish.

It was Alistair who came first, having caught and then passed his younger brother on the run to claim the 21st gold of his career.

Above: There was more medal success in the women's race at Leeds in 2016.

There was further British success in the women’s race, with Vicky Holland becoming the fourth GB athlete to stand on a World Series podium as she took the bronze medal in Millennium Square.

It was a battle of the Brits for the final step on the podium however, with Holland holding off and striding away from Stimpson in the final stages of the run. In their home race, British women claimed five places in the top 15 – Stanford (9th), Learmonth (10th) and Lucy Hall (13th).

Following on from Leeds, the series headed to Stockholm, Sweden where once again the Brownlees recorded a one-two, with Alistair again coming out on top. This was his second win in the city, with Jonathan also having claimed two victories there. 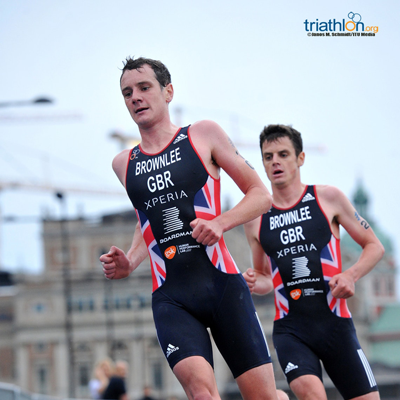 Above: A second consecutive Brownlee one-two on the series in Stockholm

Jenkins took third place in the Swedish capital in what was to be the final British podium finish of the series. Having been part of a large chase group behind leader Duffy (BER), Jenkins and Andrea Hewitt (NZL) broke free to attempt to chase down the Bermudan.

The lead she’d established was too much however, and she crossed the line in first place, with Hewitt finding the legs to outsprint Jenkins in the final stages.

Hamburg hosted the final WTS race before athletes headed off to Rio for the Olympic Games, with the German city giving athletes a rapturous welcome. Adam Bowden (21st) and Tom Bishop (49th) were the only British men to compete at the sprint distance event.

Britain’s Hall led the way out of the swim and onto the bike for the women before ending up 20th with Jodie Stimpson, the current series leader, coming home in 4th having pulled to the front of and then away from a large chase group.

Above: Jonathan Brownlee won in Edmonton to set up a head to head showdown at the Grand Final.

Returning from Rio with a silver medal, Jonathan Brownlee took his first WTS gold in over a year as the series resumed in Edmonton.

Having taken the lead out of second transition, Brownlee led a British quartet to top-10 finishes, with Grant Sheldon (4th), Bishop (5th) and Bowden (7th) all performing well.

Holland and Stanford finished 5th and 7th in the women’s race as American athletes took a clean sweep on the podium.

The 2016 Grand Final took place in Cozumel, Mexico in what is the only WTS race to have taken place in the country.

Heading into the event, Jonathan Brownlee knew that victory and a fourth or below finish for Mola would see him leapfrog the Spaniard and become World Series Champion for the second time.

In the women’s race, Duffy and Jorgensen were to go head to head with barely anything to separate them in the overall rankings. Stimpson sat third in the rankings hoping to keep her feet on the podium, with Holland and Stanford 5th and 7th.

All the action from the 2016 Grand Final will be covered in a further Swim, Bike and Rerun as we take you through the best of what 2016 had to offer for British triathletes at the top of the sport.