Racing started over an hour later than scheduled due to cold conditions as the championships returned to the city for the second year in a row.

Once the action got underway however, British paratriathletes collected World Championship medals frequently across the day, with two gold, three silver and three bronze medals won.

Having won his first world title at the event in 2016, Andy Lewis successfully defended his crown in the men’s PTS2 category by over a minute.

Lewis, who had suffered a severe cycling crash earlier that year, raced consistently across all three disciplines in Rotterdam to ensure the gold medal was his once again.

Also winning gold for the team was Dave Ellis (PTVI) alongside his guide Carl Shaw. The 2017 European Champion showed his strength in the water as a former para-swimmer, being the fastest athlete through the water by almost two minutes.

Ellis also produced the fastest run split of the race to win the world title for the first time since 2013 having taken a couple of years away from the sport.

Following the win, Ellis said: “We were hoping to win, we knew we were in the top two. We just managed to hold on until the end. I’m really happy with that.”

In the women’s PTVI race, Melissa Reid claimed a bronze medal with her guide Hazel McLeod. Reid matched her result from 2016 and finished comfortably ahead of Lena Dieter of Germany.

Steven Crowley (PTS4) improved on his 14th place finish in 2016 to add the world silver medal to the silver he’d won at the European Championships earlier in 2017. 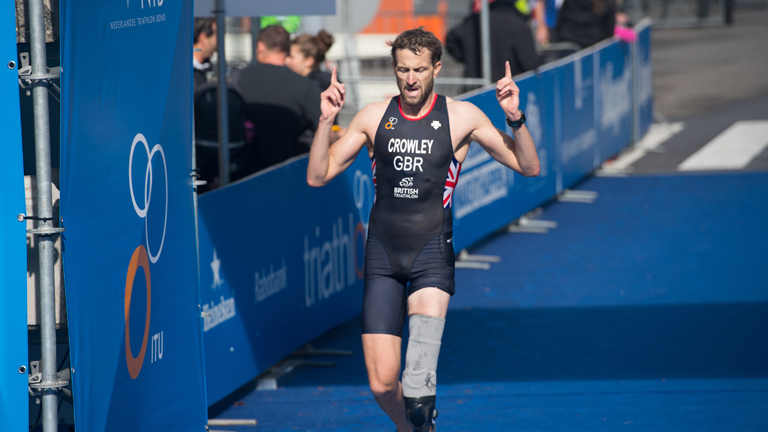 Above: Crowley took silver in Rotterdam

The race was convincingly won by Alexis Hanquinquant of France, with Crowley finishing a minute ahead of Jamie Brown (USA) in third.

Delighted with his second place finish, Crowley said: “It’s a good result, I wasn’t expecting silver to be honest. Silver at the world’s, I’d take that all day long.”

Also taking home a silver medal was PTS5 athlete Lauren Steadman. Having also won silver in the Paralympics in Rio, Steadman once again finished behind Grace Norman (USA), this time by only four seconds.

After the race, she said: “Four seconds, it’s a bit annoying, but after my seven months off, dissertation and everything that’s happened, I couldn’t have thought of a better way to finish the season.”

In a very close swim battle, Norman, Steadman and fellow Brit Claire Cashmore all came out of the water within a few seconds of each other. Despite having a faster bike leg, Steadman wasn’t able to do enough on the run to win gold having crashed out in 2016.

Cashmore crossed the line in sixth at her maiden Paratriathlon World Championships.

Adding to her European gold medal was Jade Hall (PTWC) who picked up a silver medal in Rotterdam. The two-time Paralympian for para-athletics was racing in only her second global paratriathlon event.

Hall recorded the fastest run time of the race, however, was unable to catch American Emily Tapp.

On earning her silver medal, Hall said: “Coming into this I would have liked to have come top five, and that was my aim; but to come away with a medal, I’m really really pleased.”

Joe Townsend won bronze in the parallel men’s event having come sixth in Rio and fifth in the 2016 World Championships.

Having posted the second slowest swim time, Townsend’s bike and run times were amongst the quickest in the race as he battled to a place on the podium. 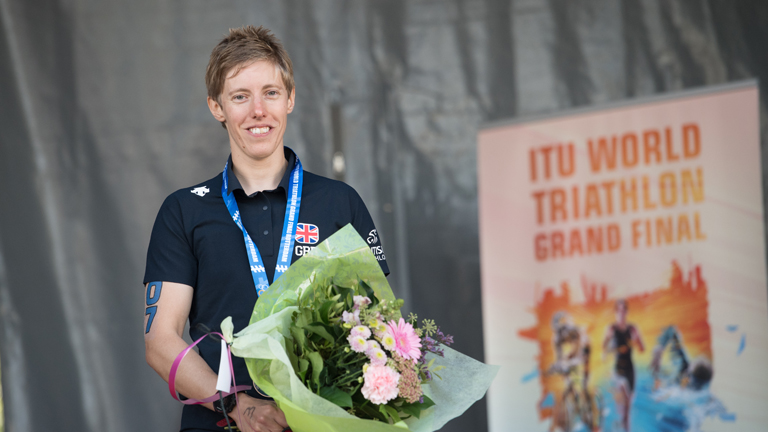 Above: Brown adds world bronze to her European silver

The European silver medallist showed her strength on the bike, finishing close behind Allysa Seely of the USA in silver.

Finishing in fourth place and just off the podium were Ryan Taylor (PTS3) and George Peasgood (PTS5).

Taylor suffered mechanical issues on the bike leg which cost him a chance of a medal.

Commenting on the day’s performance, head coach Jonathon Riall said: “It’s been an absolutely exceptional day. The preparation has been superb. We had a couple of athletes who potentially didn’t get the medals they deserved through mechanicals and crashes but overall, absolutely superb day.”