Swim, Bike and Rerun: history in the making at the 2015 Grand Final

Chicago played host to the 2015 edition of the season-ending ITU Grand Final with a host of British and international talent on show.

Jorgensen could become the first woman to win two ITU Grand Final races; Gomez, the chance to become the first athlete to win five ITU World Championship titles; and together, 2015 could be the first time that both the men’s and women’s world titles have been defended in the same year.

Having won all six of her 2015 WTS races and knowing a finish in the top-four would see her retain her world title, it was Jorgensen’s title to lose as the athletes set off into Lake Michigan.

The two-lap swim saw Jorgensen well-placed, with Holland entering T1 alongside the American as Sarah True (USA) led the athletes out.

The lead group saw 29 athletes cycling together in the lead group and, despite attempts from Flora Duffy (BER) to break clear, the group stayed together across the 39km ride and into T2.

The Brits were well-placed, with Stimpson, Holland and Stanford coming into transition second, third and fourth, with Jenkins a couple of seconds further back. Jorgensen was well-known as the strongest runner in the sport and, as part of the large lead group at T2, was in prime position for the 10km run.

A three-woman breakaway soon emerged on the run which would see the course take the athletes through downtown Chicago, with Holland and Stanford racing alongside Jorgensen at the front.

With just over 2km to go, the American strode clear to secure the race and series win, grabbing her national flag to carry down the blue carpet. Behind her, Stanford pulled ahead of Holland to take silver ahead of her compatriot. 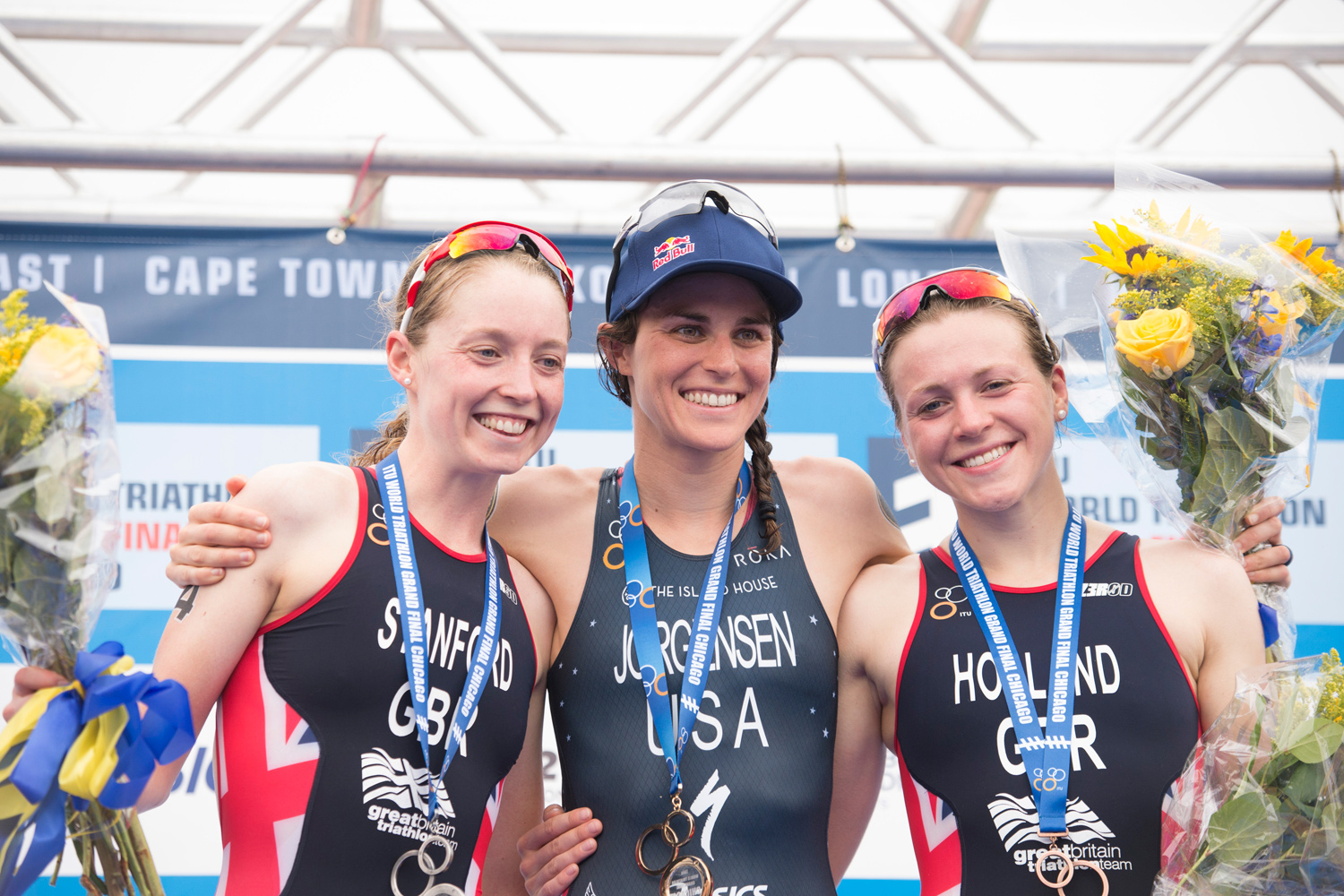 Above: Second and third for Stanford and Holland behind Jorgensen

That bronze medal saw Holland move to fourth in the overall standings, missing out on a podium place by just over 100 points. Seventh on the day saw Sarah True (USA) maintain her overall bronze medal position, with Andrea Hewitt (NZL) finishing fourth to jump to second overall.

It was a strong day for British women, with Stimpson finishing sixth and Jenkins, eleventh. India Lee also raced for Britain, crossing the line in 56th.

In the men’s race, Jonathan Brownlee, Adam Bowden and Mark Buckingham flew the flag for Britain as Gomez (ESP) sought to win the overall series title for the third consecutive year.

A podium finish would be enough to see him do this regardless of where second place overall, Mario Mola (ESP) and third place, Vincent Luis (FRA) finished in the race.

Following damage to the pontoon as a result of bad weather in Chicago, the swim route had to be altered. It was the common sight of Richard Varga (SVK) leading the athletes out of the swim and into T1, with Gomez, Mola and Luis all in touch of the Slovakian alongside Brownlee.

Despite having a gap of over a minute at one point, the lead group were caught by chasers to create a large group of around 60 men.

Four men made their way into T2 ahead of the rest however, once on the run, the remainder of the field showed its strength to catch them up.

Gomez (ESP) and Mola (ESP) made the race their own to ensure a Spanish one-two and Gomez the series win, but both men still wanted to take the race victory for themselves.

Mola, who’d won the first race of the series in Abu Dhabi, was the only man to race in all ten events of the 2015 series and fended off his compatriots attempted breaks before making a defining break of his own to win the Grand Final. 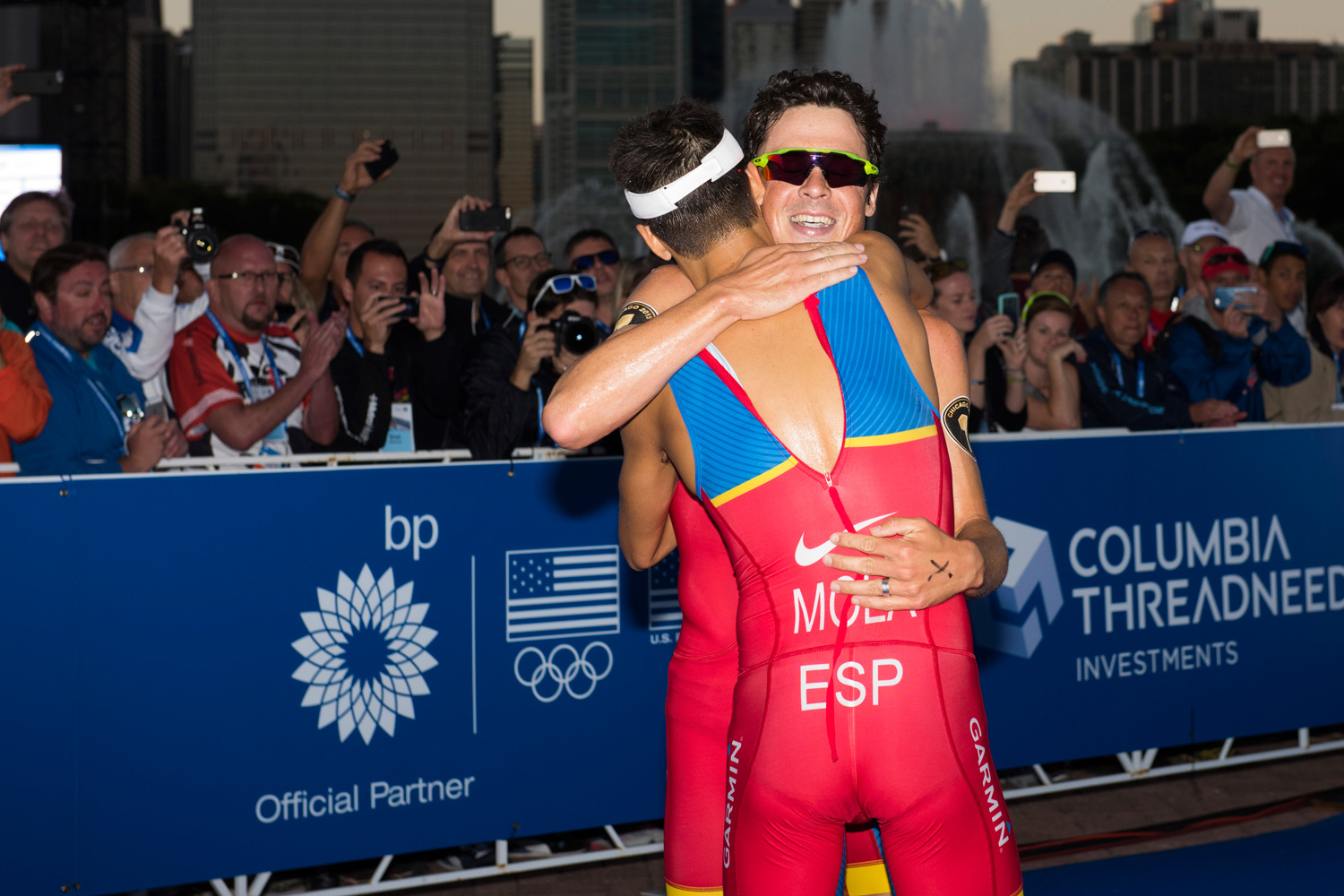 Gomez took second to win the overall series with Mola in second overall. Richard Murray (RSA) finished third in the race to be fourth overall, and Luis (FRA) claiming the final place on the series podium with his fifth-place finish in Chicago.

Alongside the WTS final races, the Grand Final also gave the chance for the best up-and-coming athletes to race in the Junior and U23 World Championships.

In the men’s U23 Championship, Gordon Benson, Chris Perham and Marc Austin raced for Britain in what was actually the first race of the Grand Final.

Having negotiated the swim and T1 where the majority of the 64 athletes stayed together, the three Brits were positioned in the large lead cycling group throughout the bike leg, with Benson being amongst the front-riders coming in T2.

The second transition and early part of the run was enough to spread the group out, with Benson part of a breakaway group of five. 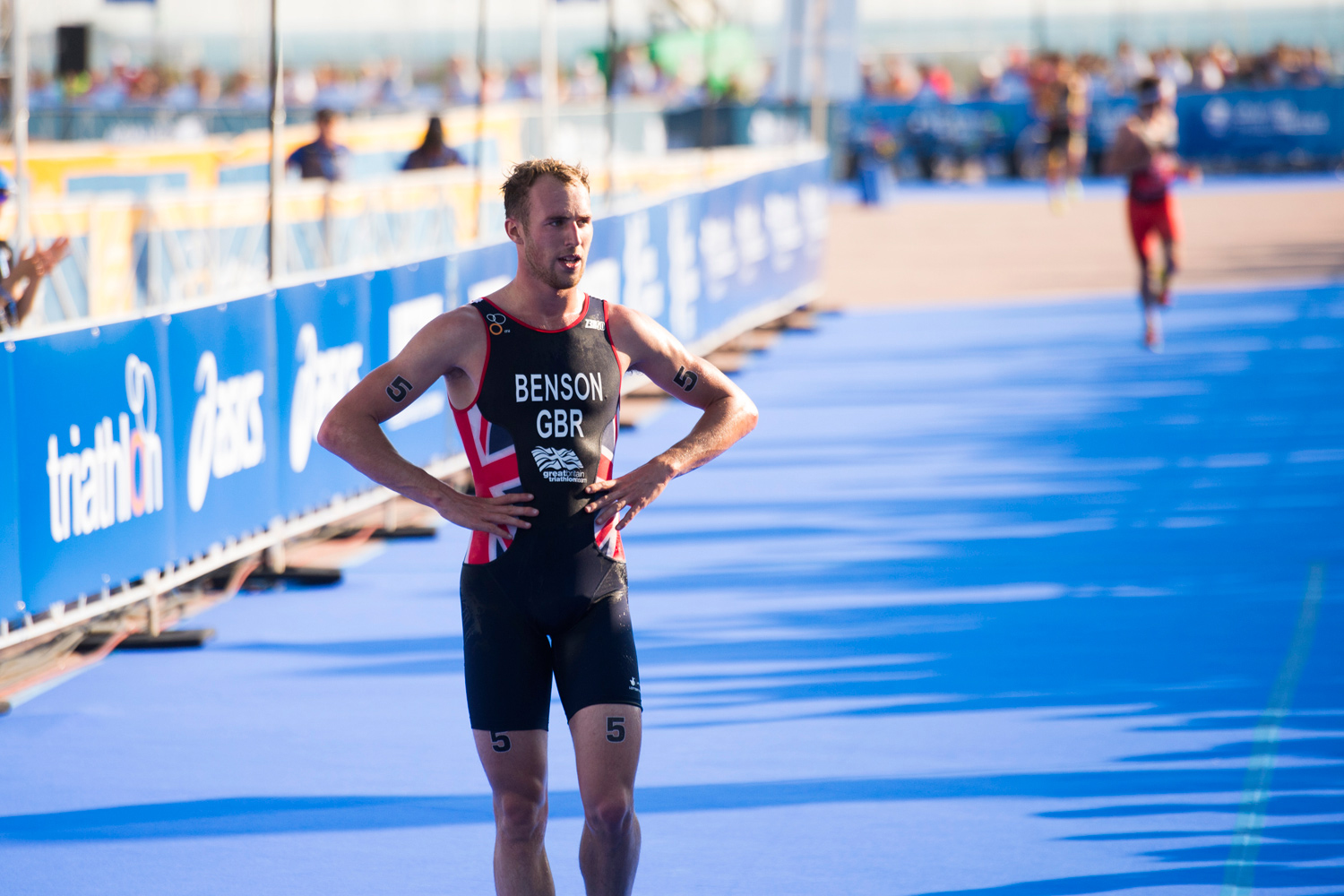 Above: Gordon Benson battled to fifth place in Chicago

Five became three, became one, as Jacob Birtwhistle (AUS) showed his strength to become the U23 World Champion having come second in the junior race the year before. Benson finished in fifth, with Perham, 26th, and Austin, 33rd.

In the women’s U23 race, Chloe Cook was the sole Brit competing.

Cook was amongst the first group of swimmers out of the water and formed part of a lead group of 15 or so athletes out on the bike course. She helped set the pace at the front of the pack and was second into T2.

Despite being one of the early frontrunners, Cook started to fade across the run as Audrey Merle and Leonie Periault competed in an all-French battle for the win. Merle outsprinted her compatriot on the blue carpet to win, with Melanie Santos (POR) third.

Cook crossed the line to finish eighth in her first World Championship having only made her international debut that year.

After a frenetic start to the first run, Dijkstra and Dickinson were among the first athletes into T1, with the wet conditions proving tough riding for the athletes. Dickinson suffered a DNF on the bike, whilst Dijkstra maintained his position amongst the leaders to be well position coming into T2.

Just with the U23 women’s race, there was only one Brit in the women’s Junior World Championship, with Elizabeth Hood pulling on the GB trisuit.

Hood was third out of the water, however cycled as part of the chase pack as Laura Lindemann (GER) and Taylor Knibb (USA) rode clear early on to establish a commanding lead as they entered T2 side-by-side.

It was the German who had the stronger run to defend the title she won in 2014. Knibb took silver, with Lotte Miller (NOR) completing the podium just one second ahead of Nelsen of Denmark. Hood finished in 27th for Britain.

Also racing at the Grand Final were British paratriathletes in the Paratriathlon World Championship, which you can read about here, and members of the Great Britain Age-Group Team.

The Age-Group Team competed in both the Sprint and Standard Distance World Championships, and you can read full reports on the buttons below.

In addition to the triathlon racing, the ITU Aquathlon World Championships were also hosted in Chicago, with a round up available here.