The Olympic Capital, Lausanne, welcomed triathletes from around the world as it hosted the ITU Grand Final in 2019.

With the World Triathlon Series (WTS) concluding at the Grand Final, Katie Zaferes (USA) was in pole position to win the title she had so narrowly missed out on 12 months earlier, with Vincent Luis (FRA) leading the way in the men’s series.

Having run her close all year, Georgia Taylor-Brown and Jess Learmonth were still in contention should the American slip up and results go their way, with all three also battling to secure a place on the overall series podium.

Having shown her strength in the water throughout the series, Learmonth was once again the fastest athlete through the swim and found herself out on the early part of the bike leg on her own.

Fellow Brits, Taylor-Brown and Sophie Coldwell were not far behind her as they and series leader Zaferes caught up with Learmonth as part of the chasing group just over 7km into the bike course.

By the time the first athletes reached T2, it was a leading group of five. Learmonth, Taylor-Brown and Zaferes were joined by multiple world champion, Flora Duffy (BER) and Vittoria Lopes of Brazil as they made their way onto the run.

It wasn’t long before the series top-three, Zaferes, Learmonth and Taylor-Brown, made it their own race and secured the podium positions for themselves. Taylor-Brown fell away from the other two with just over 1km to go and, with less than 500m to go, Zaferes pulled clear to secure the world title. 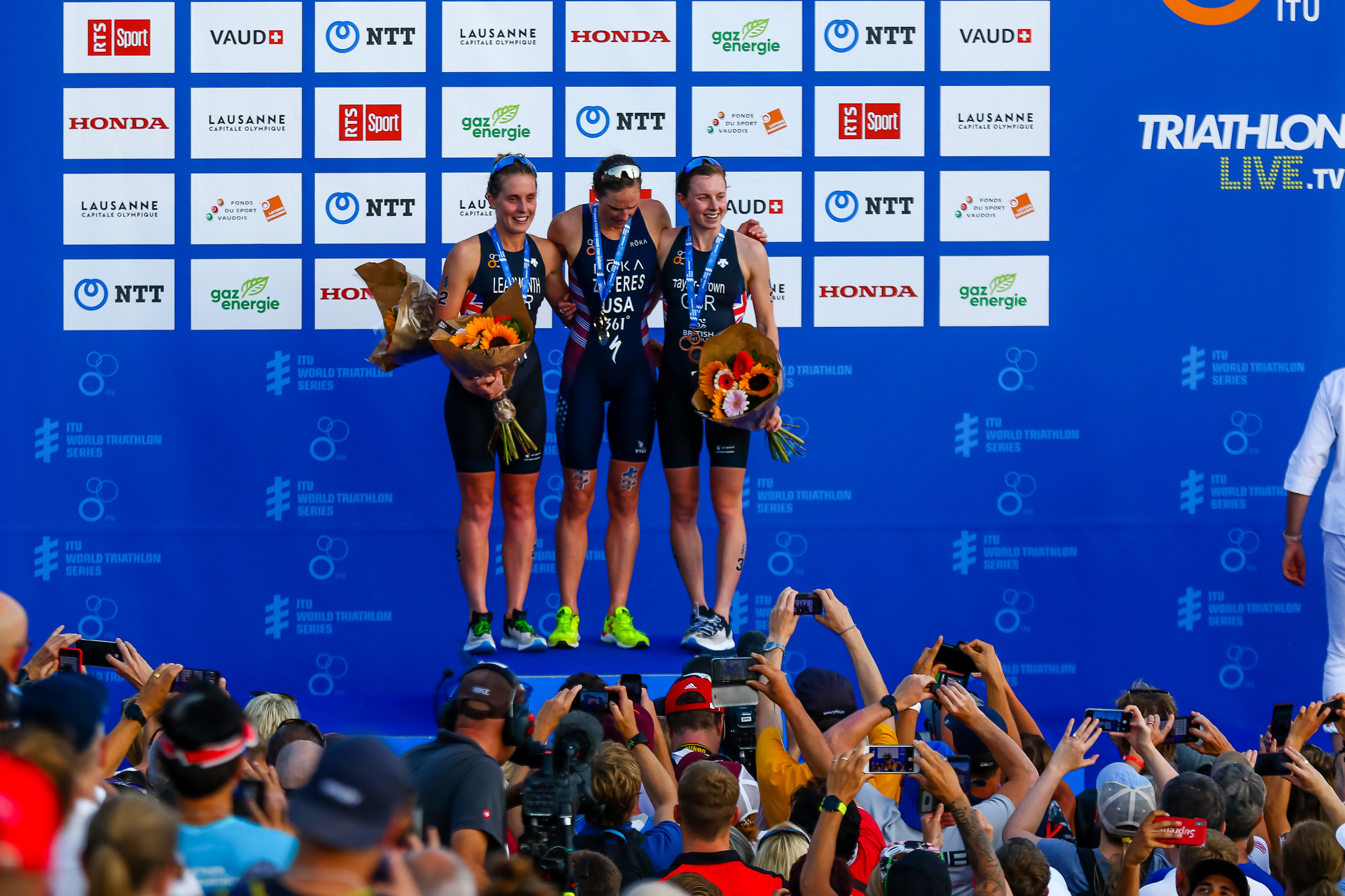 Above: The race podium mirrored the series podium at the Grand Final in 2019

Zaferes, Learmonth and Taylor-Brown were first, second and third in the race and the overall series, making it the second year in a row that Taylor-Brown had taken overall bronze.

Alex Yee and Jonathan Brownlee raced in the men’s race in Lausanne, with Luis (FRA) knowing a fifth-place finish would see him crowned world champion for the first time.

Neither of the British athletes was able to race at the front of the swim pack however, with the bike leg seeing a long train of athletes riding together, they were able to maintain good positions ahead of the run.

As the athletes made their way onto the 10km course, Kristian Blummenfelt (NOR) led the way. His first attempted breakaway was stifled by Mario Mola (ESP) and Luis, however, his second one stuck and saw him take his first ever WTS victory.

Mola pushed on to finish second, knowing that a seventh-place finish for Luis would see him take the title for the fourth consecutive year. As it was, Luis finished fifth to win his maiden WTS crown. Mola finished second, with Javier Gomez (ESP) third overall. 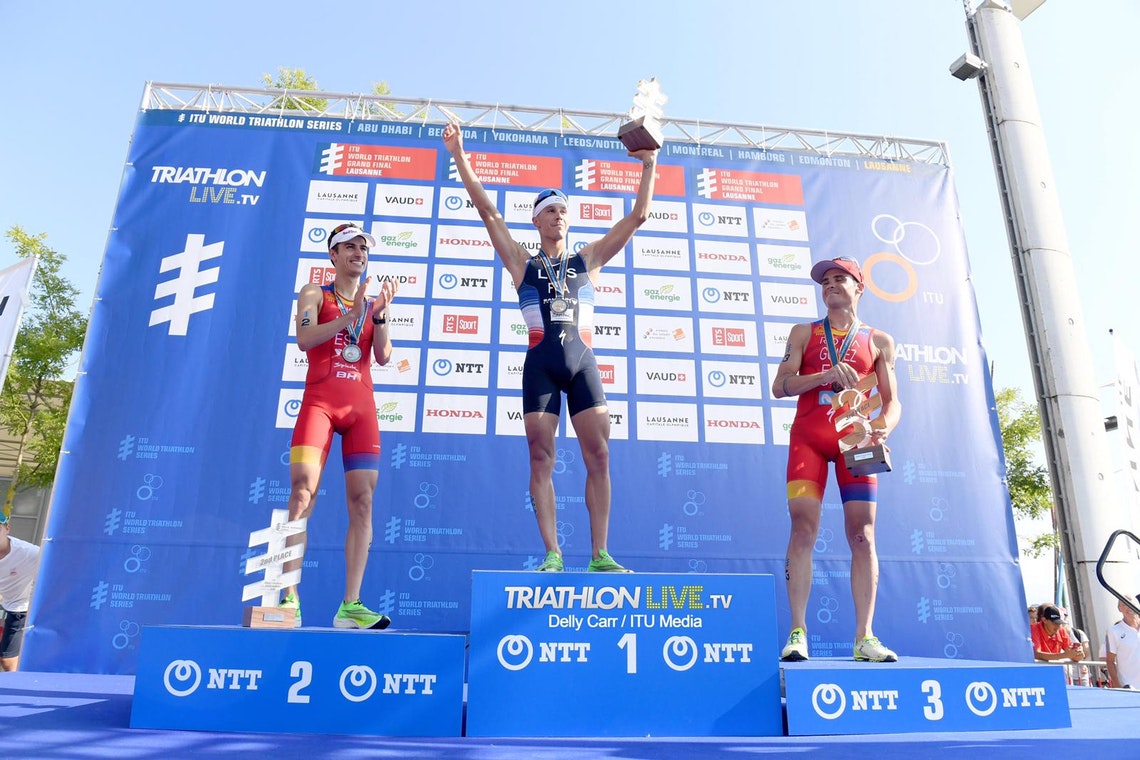 Above: Vincent Luis won the men's series for the first time in 2019. C: Delly Carr

The ITU Grand Final in 2019 also saw the world’s best paratriathletes, under 23 and junior athletes compete in their respective world championships.

You can recap the 2019 Paratriathlon World Championships in our separate Swim, Bike and Rerun here.

In the women’s U23 World Championship, Great Britain were represented by Olivia Mathias, Kate Waugh and Sophie Alden for the 1500m swim, 40km bike and 10km run.

Alden was the first of the Brits out of the water as she followed close behind the early leader, Putnoczki of Hungary into T1. Mathias wasn’t far behind and both were part of the lead cycle group.

On the tough course, Alden fell away midway through the bike leg with Mathias maintaining her position amongst the leaders through to T2. 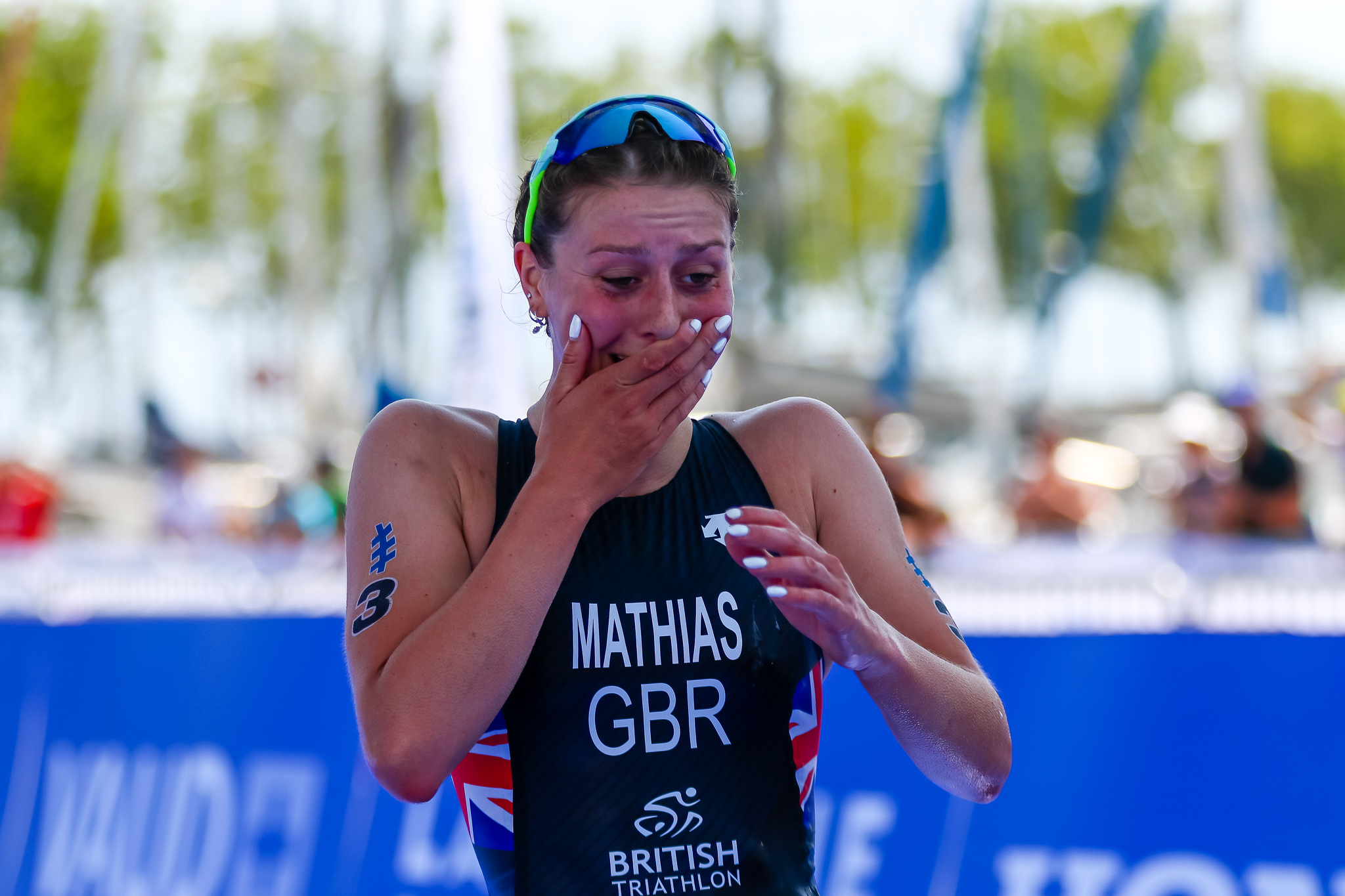 Above: Mathias claimed silver in Lausanne

Frenchwoman, Emilie Morier, made her break from the get-go to establish a commanding lead, with Mathias trying to stay close to her and opening up a gap to the rest. The Brit closed the gap towards the end crossed the line only 20 seconds behind Morier and another 20 seconds ahead of Tertsch (GER) in third.

Waugh set the second fastest run split of the race to run her way through to fourth place, whilst Alden crossed the line in 16th.

In the men’s race, Ben Dijkstra, Harry Leleu and James Teagle pulled on the GB trisuit in search of world championship gold.

After the two-lap swim, the three Brits were close together yet some way back from the leaders and Dijkstra was able to ride in the chase pack, trying to get himself into a good position for the run. Leleu and Teagle were in the next group back.

Dijkstra ran the fastest time of the race for the 10km, crossing the line in eighth place having made the step up from the junior category in 2017. Leleu finished 17th and Teagle 28th.

In the women’s Junior World Championship, Sophia Green and Erin Wallace were sixth and seventh out of the water, completing the swim just a matter of seconds behind the leader Weber (SUI). The pair cycled well as part of a large lead group to be well positioned coming into T2.

Across the 5km run, Italian’s Mallozzi and Arpinelli raced all the way to the line, with Mallozzi just able to outsprint her compatriot, with Wallace finishing fifth and Green 24th.

In the men’s race, Marcus Day was the fastest athlete through the 750m swim, however, he and Toby Osman were both caught up in the large cycle pack that encompassed nearly all of the athletes before heading onto the run. 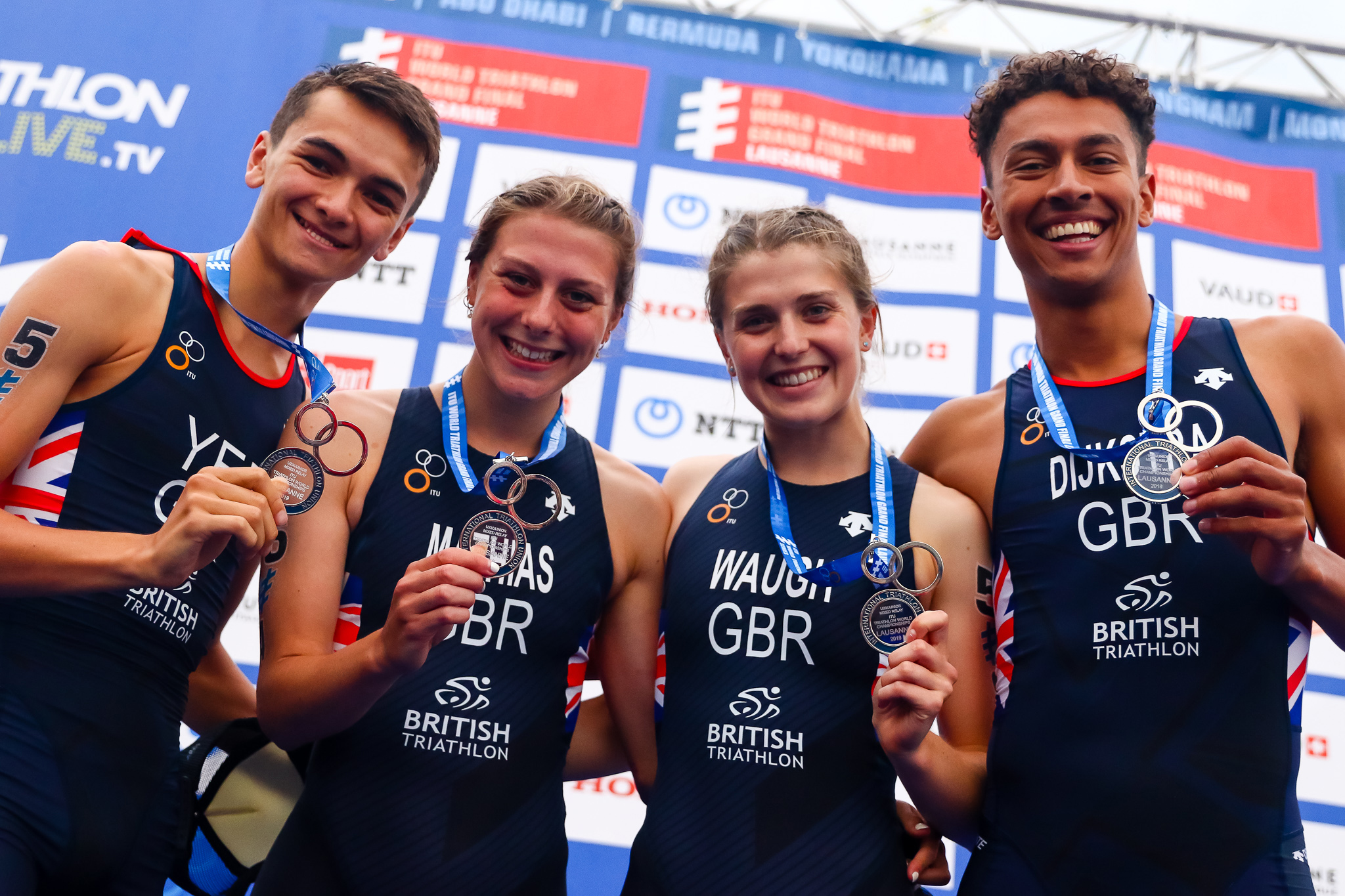 Above: The British quartet took silver in the U23/Junior Mixed Relay

The final race of the weekend was the U23 and Junior Mixed Relay World Championship, with Olivia Mathias, Ben Dijkstra, Kate Waugh and Alex Yee claiming silver for Great Britain, seven seconds behind champions New Zealand.

As well as the elite athletes, 630 members of the GB Age-Group Team also travelled to Lausanne to compete in the Sprint and Standard Distance Age-Group World Championships.

Across the races, thirteen British athletes won gold medals, including Dominic Coy in the men’s 16-19 category and Judith McKay in the women’s 80-84 category. You can read a full roll of honour from the British team here.