Athletes criss-crossed the world in the hunt for ranking points in 2019, racing at seven events in six countries on their way to the Grand Final in Lausanne.

The series kicked off in Abu Dhabi, with the city hosting a World Triathlon Series (WTS) race for the tenth time, as the world’s top athletes reunited for a sprint distance race.

Both world champions from 2018, Vicky Holland and Mario Mola, competed in the race, with Holland racing alongside 2018 bronze medallist, Georgia Taylor-Brown, Non Stanford, Jess Learmonth and India Lee in the women’s race.

In the men’s race, Tom Bishop was joined by Alex Yee who made his WTS debut having won the most recent World Cup event in Cape Town.

The 750m swim took the men just under eight-and-a-half minutes, with Bishop part of an early break of athletes which was caught quite early on to see a large group making their way into T2.

Hayden Wilde (NZL) set off quickly onto the 5km run, however, on the final lap, three-time world champion Mola showed his strength to pass him with Yee running alongside the Spaniard.

Yee raced his way to a silver medal on debut, with Bishop battling amongst the chasers behind him to secure a top-ten finish, crossing the line in ninth. 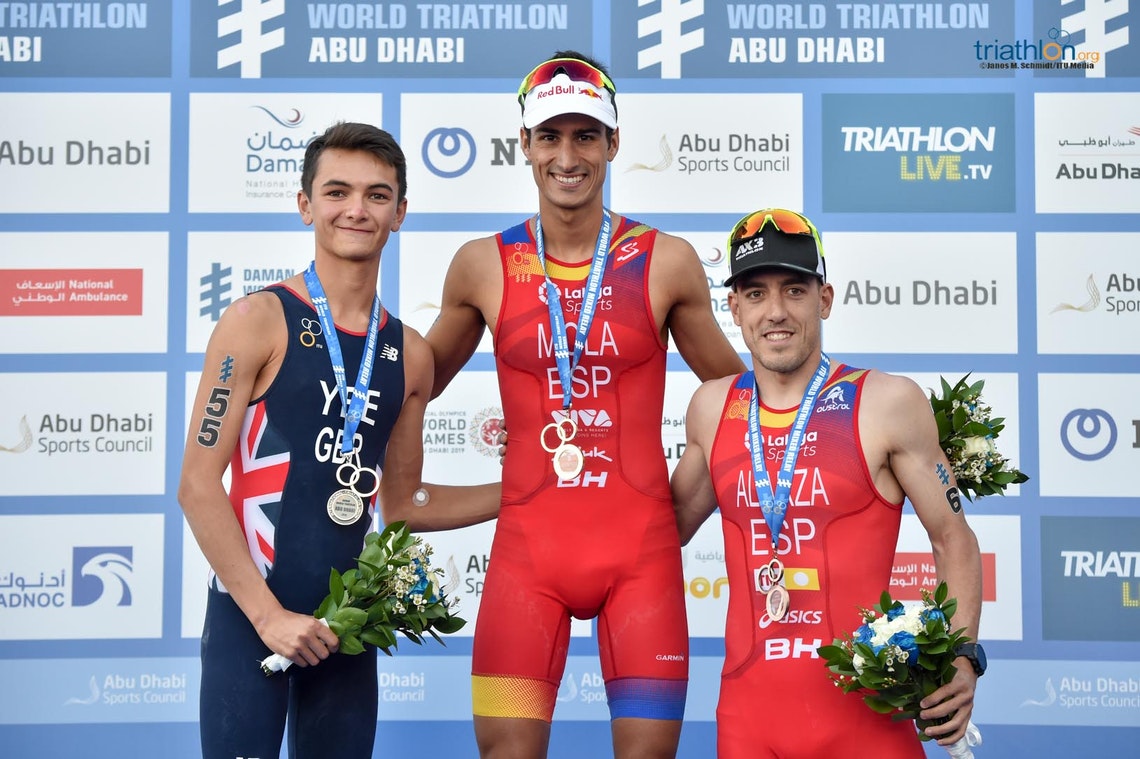 Above: Alex Yee took silver on his WTS debut in 2019

The five Brits were among 56 athletes to dive into the Yas Marina with Learmonth the first athlete out of the water alongside 2018 runner up, Katie Zaferes (USA).

Seven athletes made the race their own on the 20km bike leg, with Learmonth and Zaferes driving them to a minute’s advantage over the chasers.

It was the American who made her move on the 5km run early on to set up her win, whilst Learmonth battled it out against Taylor Knibb (USA) to earn bronze.

Holland, Bishop, Stanford and Yee all lined up together in the mixed relay race in Abu Dhabi, finishing seventh.

From the UAE, the series made its second stop of 2019 on the Atlantic island of Bermuda for the first standard distance event of the year.

Jess Learmonth and Vicky Holland were amongst the fastest swimmers, with Katie Zaferes (USA) and Lotte Miller (NOR) the first athletes onto the bike course and set themselves up with a significant lead.

Holland was left behind by the other three, leaving Learmonth to battle it out for the top spot on the podium. The trio soon spread out, with Zaferes taking gold ahead of Learmonth and Canadian, Joanna Brown, passing Miller to take bronze. 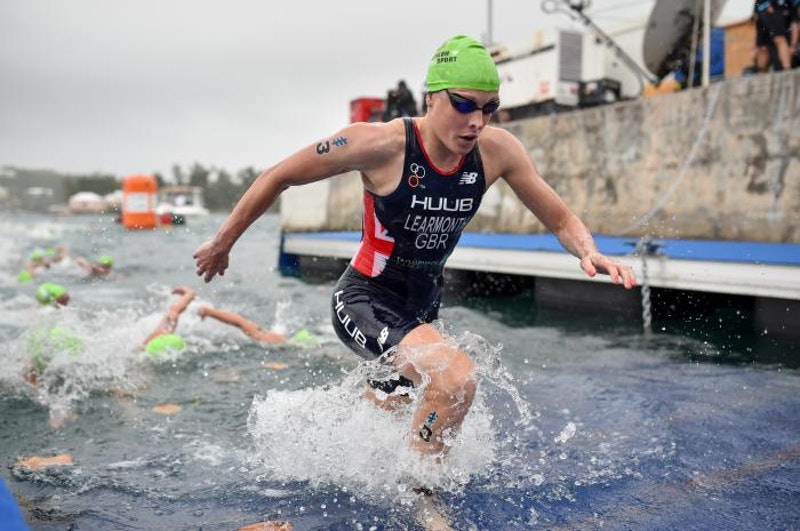 Above: Jess Learmonth made it two consecutive podiums with silver in Bermuda

Jonathan Brownlee was the sole British man to race in Bermuda in 2019 following injury in 2018. Brownlee was tenth out of the water, with a ten-second deficit to the leaders, however, rode amongst the leaders on the bike.

The Brit tried to get the group to drive forwards but was unable to grow the gap to the chasers. As the athletes headed out onto the run, Brownlee wasn’t able to run at the front as Dorian Coninx (FRA) took gold ahead of Mario Gomez (ESP) who outsprinted Guvav Iden (NOR), finishing 11th.

Race three of the series took the athletes to Yokohama, Japan. Jess Learmonth had another strong swim and cycled as part of a lead group of seven that created a large gap over the chasers.

She was unable to make it three consecutive podium finishes to cross the line in sixth, as Katie Zaferes, Summer Rappaport and Taylor Spivey made it an American clean sweep.

Georgia Taylor-Brown recorded the second fastest run split of the day behind Zaferes to jump ahead of her compatriot to take fifth, with Non Stanford also putting in a fast run time to finish eighth.

Having both secured top-ten finishes in Abu Dhabi, Alex Yee and Tom Bishop raced for Britain in Yokohama.

Yee once again showed his strength on the run, being the only man to run the 10km in under 30 minutes to bridge the gap on the leaders to finish fifth after leaving T2 in 28th. Frenchman, Vincent Luis, earned his first WTS win having been at the front throughout. Bishop finished 20th.

With Katie Zaferes (USA) having won three-from-three, the British women hoped that home advantage could help them topple her as the series made its way to Leeds.

Jess Learmonth and Sophie Coldwell led the way for the Brits as they came out of the water first and third, just ahead of Zaferes. Despite Coldwell and Zaferes initially making a break on the bike, it wasn’t long before they were caught by the first chase group to create a lead group of six including Coldwell, Learmonth and Georgia Taylor-Brown.

Out on the run, it was Taylor-Brown and Zaferes who would lead the way, with the young Brit running clear to win in front of the home crowd. Learmonth took the final podium position, with Non Stanford (5th), Vicky Holland (7th), Coldwell (9th) and Jodie Stimpson (15th) all claiming top-20 positions. 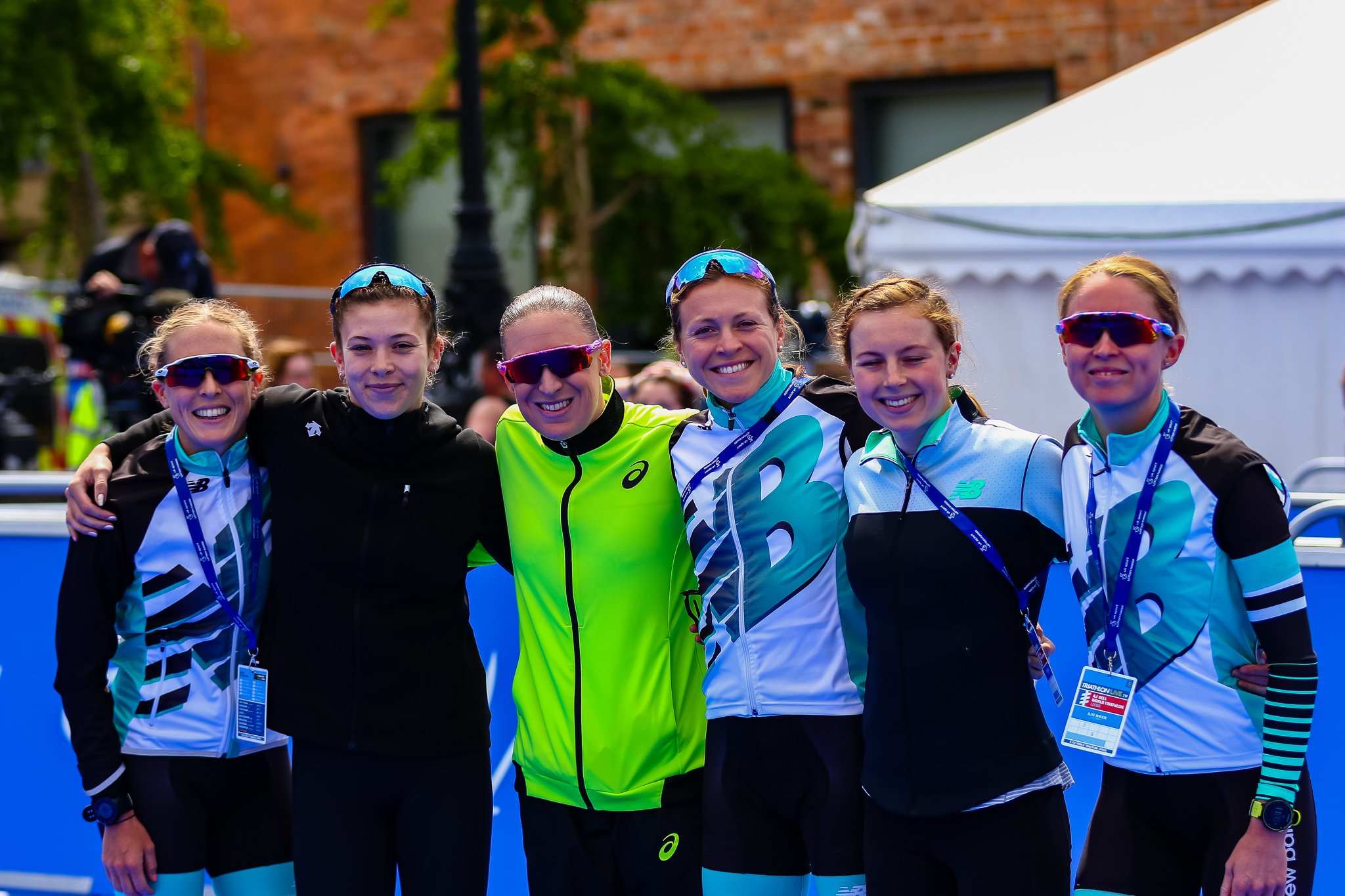 Above: British women secured top-20 positions in front of their home crowd

The men’s race saw the return of Alistair and Jonathan Brownlee to race for Great Britain alongside Tom Bishop and Alex Yee.

The two brothers were amongst the leaders entering T1, however, a large number of athletes made it onto the bike course together. Despite a few attempted breaks in, which Bishop and the Brownlees all attempted their own breakaways, the group stayed together through the 40km.

Jonathan and Alistair both fell back through the field to finish 35th and 44th, whilst Bishop and Yee ran well to finish 13th and 15th. Australian Jacob Birtwhistle posted the fastest run time to take the win.

The following week, Nottingham hosted a WTS mixed relay race in which Taylor-Brown, Dijkstra, Coldwell and Yee represented Great Britain. The event was changed to a duathlon as a result of the persistent wet weather in the UK, however the British team dominated from the start to take the gold.

From Britain, the athletes moved to Canada to race in Montreal with Georgia Taylor-Brown, Jess Learmonth and Jodie Stimpson hoping to reproduce their good form from Leeds on the new, sprint distance course.

Learmonth was one of the front riders having had another very quick swim, with Taylor-Brown leading the charge to close the gap. Halfway through the 20km bike, they caught them up to see a group of six arrive in T2 together. 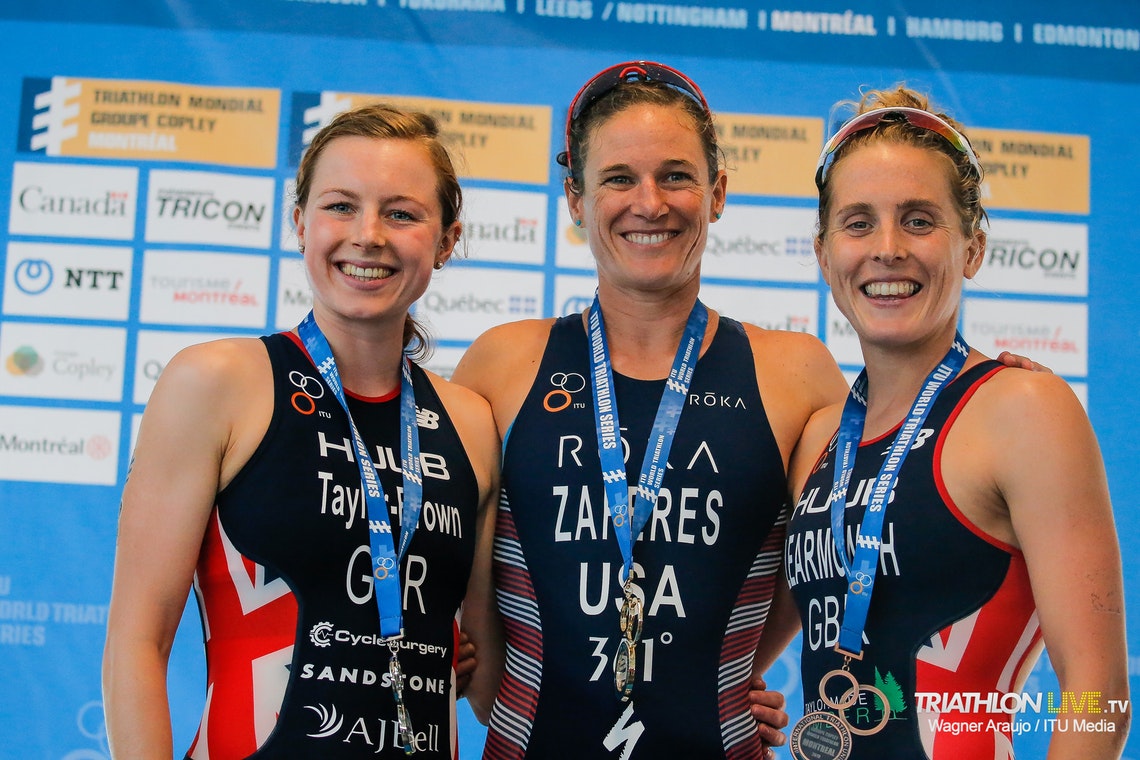 Above: Second and third for Taylor-Brown and Learmonth in Montreal

Taylor-Brown and Katie Zaferes (USA) battled it out for gold, with the American just having enough on the final lap to make if four wins from five, with Learmonth able to get the better of Italian, Betto, to take bronze.

Tom Bishop was the only British man to take to the course, finishing 29th, as Jelle Geens (BEL) outran the rest of the field, outsprinting Mola (ESP) to win. Tyler Mislawchuk took bronze on home soil.

Returning to Europe, Sophie Coldwell led the way for Britain in Hamburg, with Coldwell, Georgia Taylor-Brown, Non Stanford and Vicky Holland all riding as part of the lead pack.

It was Stanford who took charge on the run as she battled it out with Cassandre Beaugrand following an impressive transition. The Brit won by seven seconds ahead of the Frenchwoman as she ran the fastest split of the race.

Taylor-Brown crossed the line in 5th, with Holland 9th and Coldwell 14th in the German city. 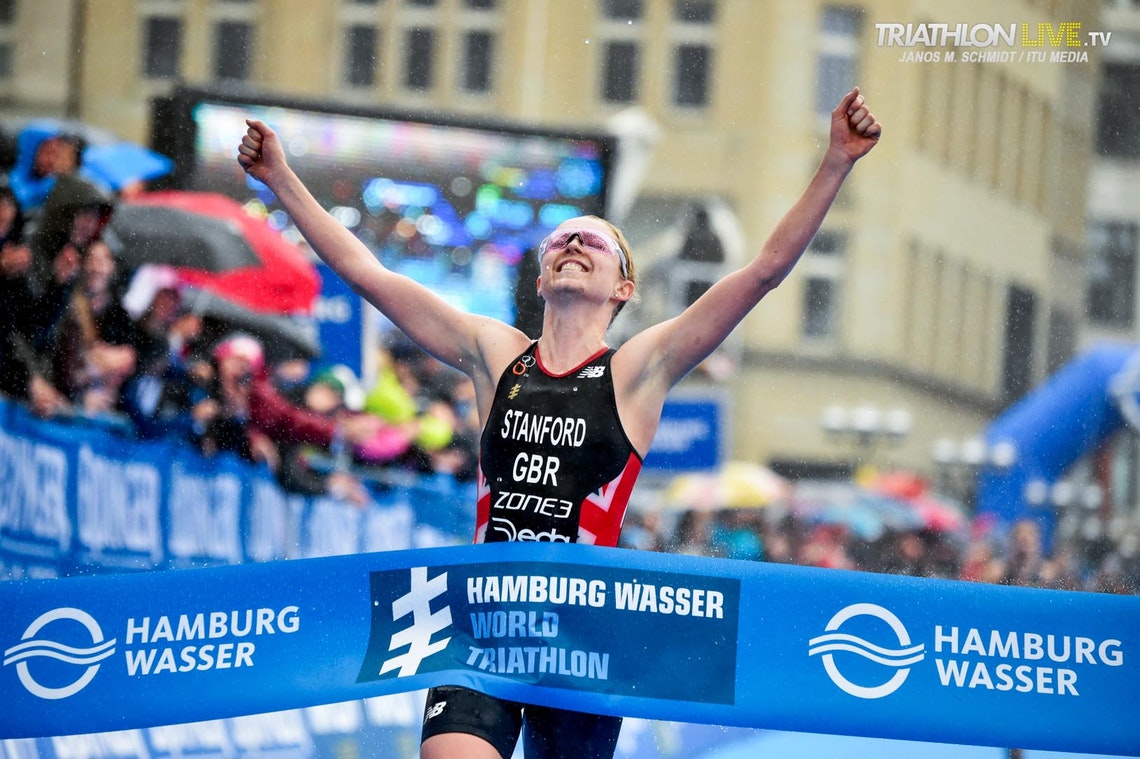 Jonathan Brownlee, Tom Bishop and Alex Yee all found their races affected by crashes with Brownlee forced to retire on the bike following damage to his bike. Bishop and Yee finished in 38th and 43rd respectively having also been caught up in crashes.

Hamburg also played host to the Mixed Relay World Championship, where Britain battled back to finish tenth. Learmonth found herself in 15th place having been squeezed against the wall in the swim, with the Yorkshirewoman, Brownlee, Taylor-Brown and Yee recovering to make the top-ten.

The penultimate race of the series saw the athletes return to Canada, with only Jonathan Brownlee, Sophie Coldwell and Beth Potter making the trip to Edmonton for Britain.

Brownlee was fifth fastest through the water and the top-five broke away from the start to create a gap over the rest of the field that they would maintain all the way through the bike course to take a 15-second advantage onto the 5km run.

The Brit set out with Van Riel (BEL), with Mario Mola (ESP) moving through the pack behind them. As Brownlee moved away from the Belgian, Mola was closing and passed Van Riel but was unable to catch the British athlete. 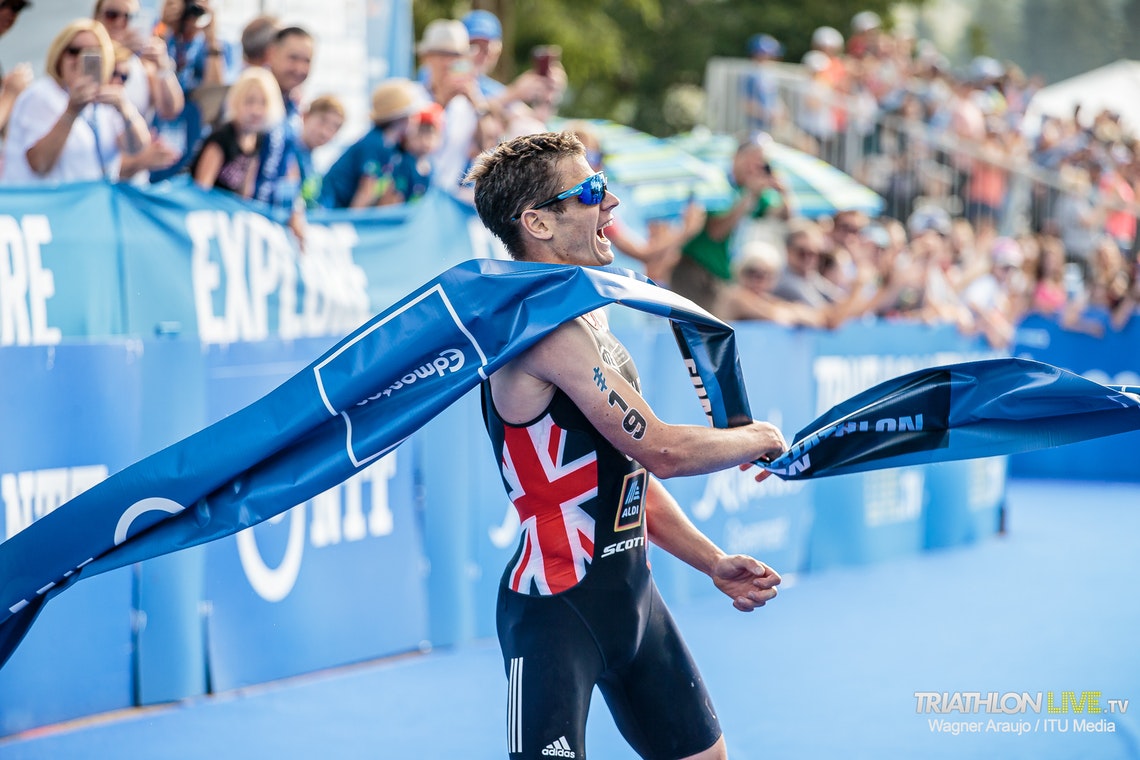 Above: Jonathan Brownlee returned to winning ways in Edmonton

In the women’s race, Coldwell showed her swimming ability once again as she finished the 750m swim in third and heading out onto the 20km bike as part of a leading trio trying to create a lead. Just over halfway through the leg they were caught by the chase group, with Coldwell maintaining a good pace at the front.

On the run, Summer Rappaport (USA) and Australians, Ashleigh Gentle and Emma Jackson, took the race into their own hands with Jackson having the strength to take the lead ahead of the American in second and Gentle in third. Potter produced a quick run time to pass her compatriot to finish 14th, with Coldwell 15th.

All the action from the Grand Final in Lausanne will be covered in an upcoming Swim, Bike and Rerun.