Great Britain’s paratriathlon team travelled to Australia to take on the very best in the world of paratriathlon. After a highly successful season for British athletes in the sport, the ITU World Championships were poised for exhilarating paratriathlon action.

Joe Townsend in the PTWC category travelled to the championships in great form. Since finishing sixth in Rio, Townsend consistently reached the podium throughout 2018, becoming a worthy opponent to both Jetze Plat and Geert Schipper of the Netherlands.

Townsend was part of a pack that was chasing the race leaders, Jetze Plat and Fernando Aranha (BRA), who both completed the swim in less than 10 minutes. The subsequent cycle was where Townsend set himself apart from the other athletes in pursuit, recording a 00:31:09 split, he took to the final discipline and beat out Giovanni Achenza (ITA) for the bronze medal. Despite not taking the title, Townsend’s performance was an impressive one, gaining time over past performances against his Dutch competitors.

The men’s PTS2 category would see another battle between Andrew Lewis and the USA’s Mark Barr. The category had been dealt a blow, with the PTS2 class being omitted from the Tokyo Paralympics event meaning Lewis would be unable to defend his Paralympic title in the coming years.

This added further significance to this race, as Lewis had a title to defend on the Gold Coast, his world title from the 2017 ITU World Triathlon Grand Final Rotterdam. This was a crown that Barr was eager to take, forging a lead of over a minute in the swim and forcing Lewis to push hard for the remainder of the race.

Lewis regained around half a minute on the cycle, but Barr’s lead was too great, and despite Lewis also putting in a strong performance on the run, Barr took the tape and Lewis crossed the line in a well-fought 2nd. The two shared the podium with France’s Jules Ribstein.

Fran Brown was another Brit to share the podium with competitors from across the Atlantic. Brown left the 2018 European Championships with the title and recorded her fastest ever time over a sprint triathlon course (01:21:24) in the process. The beginning of the race was tight, with six athletes leaving the water in the twelfth minute of the race.

Brown was amongst the fastest to transition and break away on the bike, pulling away from America’s Allysa Seely. Unfortunately, when it came to the run, Brown couldn’t keep up with the pace that was set by the American and Seely took the tape. Brown did, however, protect her lead over the remaining field and earned an impressive silver, finishing in a time of 01:19:44, one minute ahead of Hailey Danz (USA) in 3rd.

Ryan Taylor had to battle for a podium position in the PTS3 race when both Daniel Molina (ESP) and Max Gelhaar (GER) left the water ahead of him. Taylor fought back on the bike and followed up with the fastest run of the race (00:20:07). Whilst, unfortunately, Molina was too far gone, Taylor’s performance on land allowed him to steal the silver from Gelhaar, finishing almost four minutes ahead of the German. 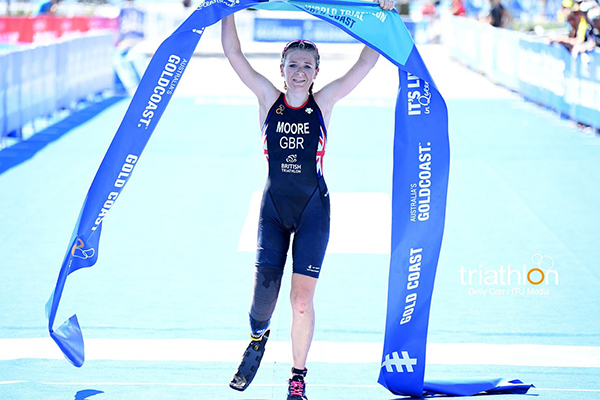 2018 had been a breakout year for Hannah Moore in the PTS4 category. Being crowned champion of Europe just months prior, Moore had the opportunity in Australia to take the ultimate title of world champion. Emerging out of the water ahead of Japan’s Mami Tani by 90 seconds, Moore continued to push on the bike but was desperately being pursued by Sally Pilbeam (AUS), who was looking to take the tape on home soil.

Pilbeam was edging closer on the run, but Moore’s lead was a strong one and Pilbeam’s efforts only further secured her prospects of gaining the silver as Moore crossed the line almost 90 seconds ahead of the Australian to be crowned the new world champion.

Moore, the youngest on the field by 14 years, said: “They were good conditions for me and on the bike, I just went as hard as I could to try and create a gap to the other girls and then just hang on during the run. It was hot out there and a tough race, but I am delighted with the result. I can go celebrate now!” 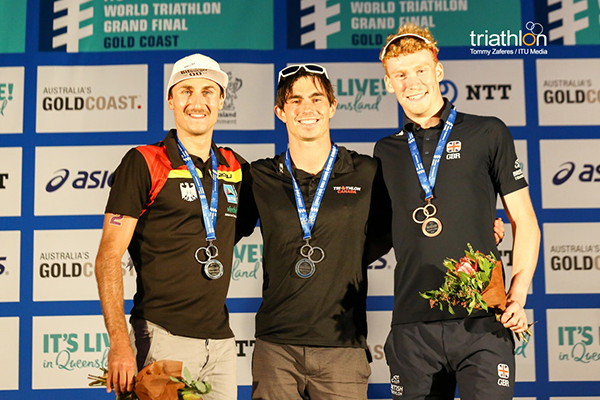 The PTS5 field was full of international talent, including George Peasgood for Great Britain. In a race where the top five all finished in under one hour, it took special performances from the athletes that were left standing on the podium at the end of the race.

Peasgood used his swim and cycling advantage well, recording the fastest splits in both disciplines and beginning the run in first place. Despite creating a large lead, Peasgood was being pursued by Stefan Daniel (CAN) at an incredible pace.

The Canadian finished the run in 00:15:56, passing Peasgood and taking the tape. Despite this, Peasgood’s time advantage was still in his favour and great enough to earn him a place on the podium, crossing the line 90 seconds later in 3rd place.

Lauren Steadman couldn’t have approached this event in better form, unbeaten throughout the year, crowned European champion for the sixth consecutive year and now in the position to take her third world title after taking the crown in both Edmonton (2014) and Chicago (2015). 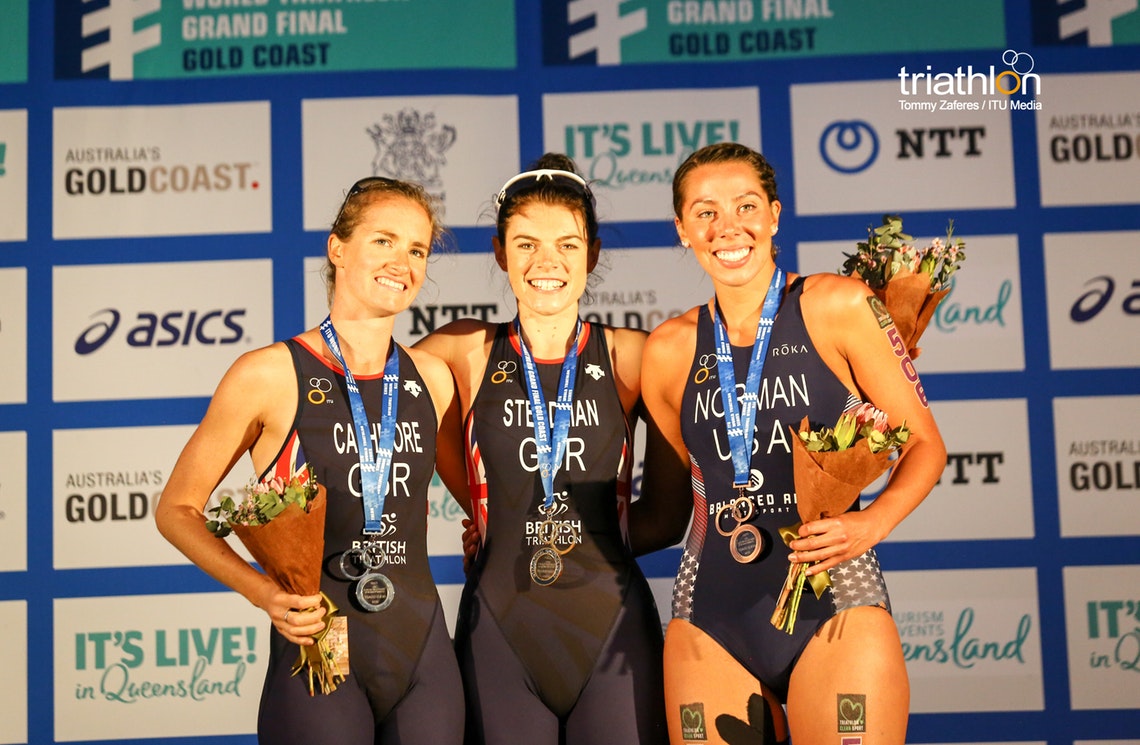 Claire Cashmore was also set for the start line and would provide even more competition to an already world class start line that included Paralympic champion, Grace Norman (USA). Out of the swim in quick succession were Cashmore, Steadman, and Norman respectively.

Steadman surged ahead of Cashmore on the bike, with the two teammates successfully holding off Norman who was chasing. Despite the final discipline typically favouring the American, Steadman took the tape after recording a run time around ten seconds faster.

Cashmore kept a similar pace to Norman too, allowing her to secure the silver and a British one-two podium. Steadman missed out on the title just twelve months earlier in Rotterdam, but she’d returned to greatness to take the crown in great style.

Steadman said: “I wasn’t expecting to win but I knew I would try my best and it was enough. I kind of planned to make the bike leg my strongest but I didn’t get as far away as I wanted to but then I found my legs on the run, so I was really happy. There is still more to come, and I have more technique work to do but I’m really chuffed and just want to say thanks to everyone who has helped me get here.” 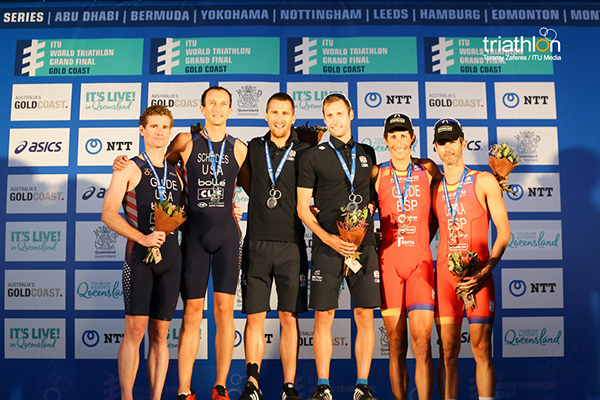 Above: Dave Ellis and Mark Buckingham after taking the title.

Dave Ellis was Great Britain’s first athlete to cross the finish line on the day. Guided by Mark Buckingham in the PTVI category, Ellis began the race with great intent, leading the field into the first transition. However, he was pushed hard by America’s Aaron Scheidies, who took the lead on the cycle. Spain’s Héctor Catalá Laparra also recorded a faster cycle than Ellis, creating an exciting battle between the three.

Despite the increased competition, Ellis all but secured the title in the first kilometre of the 5km run. Completing the run more than half a minute faster than his nearest competitor, Ellis was crowned the world champion for the third time, sharing the podium with Aaron Scheidies in 2nd and Héctor Catalá Laparra in 3rd place.

Following the race, Ellis said: “What an amazing feeling. It was a tough race and I wasn’t sure it would happen, but I got it on the run. We made the best of the race and stuck to our game plan. The guys went out harder than us, but we built through it.” 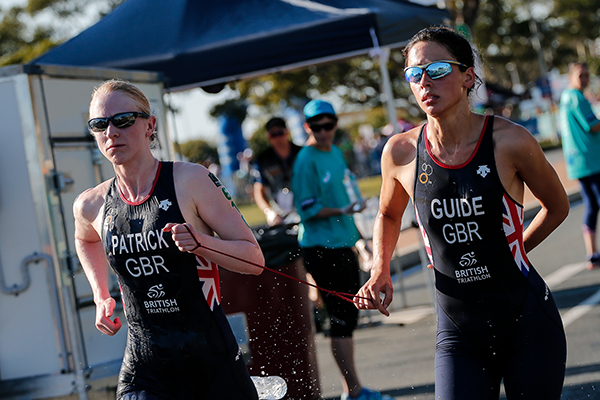 Above: Alison Peasgood on the final 5km.

Two years before these championships, Alison Peasgood won a silver medal at the Rio Paralympic Games and she arrived on the Gold Coast as European champion, following victory in Tartu. Peasgood was racing with new guide, Hannah Drewett, in the PTVI race and matched Spain’s Susana Rodriguez in the swim, exiting the water together. However, it was Rodriguez who emerged from the transition first.

Peasgood pursued on the bike, along with Katie Kelly (AUS) and the front three were all recording fantastic splits as they battled for victory. The race remained the same until the finish, with Rodriguez in 1st, Peasgood earning a silver medal and Kelly crossing the line in 3rd. With superb performances from the top three, Peasgood finished in a time of 01:07:37.

At the 2018 ITU World Triathlon Grand Final Gold Coast, every British athlete in attendance stood on the podium. An incredible feat for Great Britain, taking ten medals home from a possible ten and crowning three British world champions in the process.

Head of the paratriathlon program, Jonathon Riall, described the team’s efforts: “The most collectively well executed team preparation and delivery to date.”

He concluded: “Overall, this is the most successful outcome for our team in its short history and testament to the continuous hard work from every member of coaching and support staff.”