The Paralympic Vision for Tokyo 2020

With record breaking ticket demand, the Tokyo 2020 Paralympic Games are set to be a huge spectacle for paratriathlon.

With 2020 just over the horizon, Paratriathlon Head Coach Jonathon Riall looks ahead to paratriathlon’s return to the Paralympic Games.

2016 was a debut year for the sport at the Rio de Janeiro Paralympic Games. ParalympicsGB will now compete in paratriathlon at Tokyo with the experience of their previous Games in which Great Britain secured four podiums, including a gold medal for Andy Lewis in the PT2 classification.

“Rio was sensational, to have your first Paralympic Games on the seafront at Copacabana, Brazil was a pretty cool place, but I think across the board, across every category, you’ve now got really genuinely honest competition standards,” said Riall as he reflects on how the sport has progressed since participating in its inaugural Games.

Riall was keen to highlight the varied backgrounds of the athlete group, saying: “When you look across our categories, the world champion in the wheelchair class is a world champion hand cyclist, we’ve got ex Paralympic gold medal swimmers in our sport. So, you have got people who come in already with a knowledge of what world class training is like and I think all that has happened in the last four years since Rio is that they have learned what triathlon is like and pushed those standards on again. So, it’s a lot more professional, the expectation within our team is that if you are on our team, you’re training to try and win a medal at the Games”

The Tokyo ITU World Triathlon Olympic Qualification Event in August was important in allowing both staff and athletes to experiment from an organisational and performance perspective.

“We wanted there to be a bit of flexibility and freedom for people to try stuff and not have the guarantee that it would work,” said Riall. "People bought into the fact that we were there to test ourselves against everything that it could throw at us, and it did. I’m confident that we’ve got a team going in who is probably not only best prepared, but best able to cope with the fact that things can change and will change.” 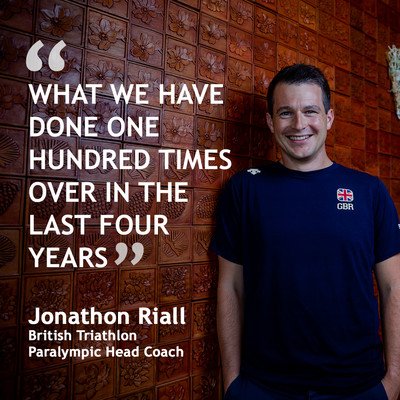 Regarding these updates, Riall said: “It means that the likes of PT2 men, Andy Lewis’ category and Ryan Taylor’s category at the time of Rio was taken out, however, you’ve got PTS4 and PTVI men who both missed out in Rio.”

Classifications haven’t been the only change in the sport since the previous Games. Great Britain has acquired new athletes, new staff and now has Paralympic experience to build from.

“Sometimes you move so fast that you forget how much change there has been,” Riall said. “So, when we look at where we are now compared to where we were coming off the back of Rio, we have almost got a completely new practitioner team, probably about 80% has changed there. Our Lead Coach for our Loughborough centre has changed and that didn’t change until the back end of 2018 and she brings with her a huge amount of experience. We have got really good athlete plans; we have got practitioners who really know their trade now”

Speaking of the progress made he said: “We are a hell of a lot better at keeping people fit, keeping people healthy, managing their load, having individual plans in place, working collaboratively and we have got a nailed down plan for next year, we know what we are doing pretty much every day through to the Games. We know where we are going to prepare, we have been to all of those venues, which again we hadn’t had the luxury of doing in the last cycle.”

Reflecting upon the last four years, Riall said: “That is fundamentally a different place, but one that we had to go through the journey to get to. It’s not like we did anything wrong last time, it’s just four years’ worth of learning.”

Looking ahead to the Games at Tokyo, Riall believes the atmosphere to be spectacular, saying “The biggest thing that Tokyo has going for it is its spectators and I genuinely pinch myself when I think about what the event will feel like in terms of an athlete experience.”

The Tokyo Games has had a record number of ticket requests, reaching 3.1 million during the first lottery, far exceeding an initial ticket allocation of 2.3 million.

“If you’re traveling over there, it’s a relatively free to view event and that’s the beauty of triathlon, be it at Olympic or Paralympic Games,” Riall said. “You’ve got a 5km bike course and you can go and stand on probably 4.5km’s worth of barrier line and watch the best athletes over two days.”

The Paralympic Games in Tokyo will take place between 25th August – 6th September 2020.