After Thomas Henderson and his daughter were diagnosed with Charcot-Marie-Tooth disease (CMT) Thomas took up triathlon to raise awareness of CMT and prove that the disease doesn’t have to be limiting.

Charcot-Marie-Tooth disease is a genetic condition that damages the peripheral nerves that typically pass instruction between muscles and the brain. Damage to these nerves is called neuropathy and many people with CMT often suffer from muscle deterioration. There are over 100 variations of the disease, therefore figuring out the best way to manage CMT can be a huge challenge.

Henderson decided to take up triathlon as a way to prove to his daughter that CMT doesn’t have to be limiting.

Henderson initially struggled for a while to accept Sienna’s diagnosis when she was just two-years old, saying: “I felt a strange bit of guilt. Your head goes away, and I was thinking that she’d have to have lots of operations and my head went into a total tailspin. It was a really stressful time.

“So I started looking at how to turn it around and how to make it more positive for me and my daughter. To say that this thing won’t stop you. It will certainly make things more difficult, but it won’t stop you. I’m very much a believer that you can achieve anything you want to, and that goes for anyone.”

He continued: “I put something on my twitter page, saying that I’m looking to raise some funds and oddly enough, a guy called George Peasgood, who’s an amazing athlete with a really inspiring story, caught sight of what I was doing and shared it and I thought it was amazing.” 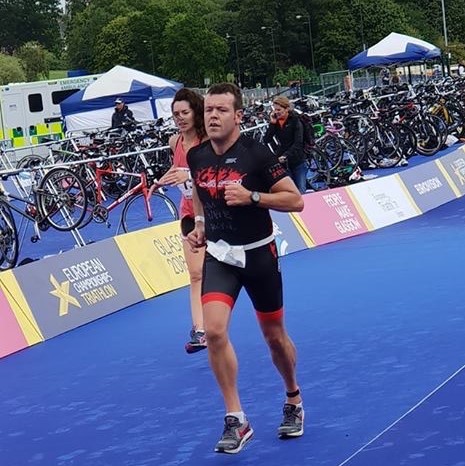 Above: Henderson racing in Glasgow.

Henderson was surprised by the personal benefits he felt upon taking up triathlon, not only raising amazing funds for charity and spreading awareness about CMT, but generally feeling healthier in both body and mind, saying: “The mental side of training is important as well. CMT can get a lot of people down, with the daily pain. Hopefully, it’ll help some people who are lacking some confidence or a bit of belief in themselves to actually get up and go for it.

“I had a look online and came across a charity called CMT UK. So, I got in touch and at that point I had already ran a 10km and raised £1,600 so they thought I’d be a good fit for the board.

“I am now on the board of Directors for the brilliant charity, seeking to help those with the condition by providing support and funding research projects to find a cure one day.”

Henderson’s latest fundraising effort was set to take place in June, competing in IRONMAN 70.3 Staffordshire in aid of Charcot-Marie-Tooth UK. The race was set to span a 1.9km swim, 90km bike and 21.1km run, but has been postponed due to the current pandemic.

Nevertheless, Henderson is still determined to complete the 70.3-mile distance this year in some form, saying: “This IRONMAN is an extension of my mission to show Sienna, her sisters and anyone else with this condition that there are no limits and that they should never ever give up no matter what.”

He continued: “I’m now in week ten of a twenty-week training programme so I’m pretty much halfway through and I really don’t want to stop, I want to do what I’ve set out this year to do.”

The current situation certainly knocked Henderson’s confidence, but he remains motivated throughout this tough period, saying: “When they were discussing lockdown, I did have to question, do I keep going? Because as much as I was putting my head down and getting on with it, it was a really difficult thing to do, knowingly work through the next ten weeks without having a guarantee that anything would happen. It is a bit of a kick.” 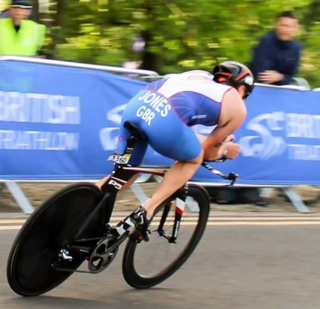 He’s been supported by his excellent coach, Martin Jones throughout the entire journey. Martin won Volunteer of the Year in Triathlon Scotland’s 2017 Annual Awards and Henderson believes him to be a crucial part of his fundraising success, saying: “The head coach, Martin Jones, got in touch me and said we’d love to do something to keep you on track. Martin’s been absolutely amazing throughout this whole thing, he designed my training plan for me and everything, so he knows how much this means to me.”

Martin is the head coach of G72Tri, a club based in Blantyre, South Lanarkshire, Scotland that Henderson joined before taking up triathlon, initially only practicing his swim, Henderson said: “Swimming has always been my thing from a young age. This was because I couldn’t really play football as there was too much of a chance of injury and I couldn’t keep up with anyone. I do love cycling, but I never had the intention to do it.”

He continued “Swimming is the only time where I can naturally be free because I’m not on my feet. In the water, I’m safe and my feet are getting a rest. I feel great after a swim.”

Sienna has also taken up the sport, with Henderson saying: “I’ve now got her into swimming, and she loves it because daddy does it. She’s only seven and she’s in lessons and classes with twelve- and thirteen-year olds, so she’s really excelling there.”

He continued: “One of the things that keeps me positive is watching Sienna just deal with this head-on. She’s been at school almost two years now and comes home most days with new cuts and bruises because she’s fallen. She’s visibly exhausted and severely fatigued but refuses to acknowledge it.” 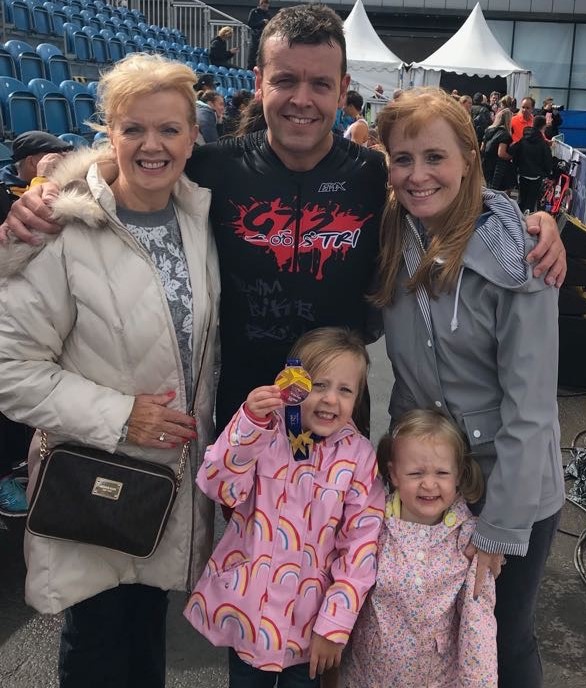 Above: Henderson and family at a multisport event.

Henderson thanks his wife, Elaine and his three daughters, Sienna, Ember and Reina for all of their support and notes how the club has also been an amazing source of encouragement, saying: “The club is a very inclusive club with people of all abilities. Everyone has got a thing and a driver. The main thing that the club does best is support and that ethos comes from Martin, right through, whether you’re a mum of five kids who’s come along just to get moving, or you’re someone who’s professional.”

Reflecting on his training and the events he’s taken part in, Henderson said: “The training, just building that up has given me a bit more confidence that I can do these things. Doing the standard distance last year was a massive thing for me. I had it in my mind, a year or so ago, that I’d only ever do the sprint, so to do that is awesome and I thought, could I even do a half IRONMAN?”

Despite his great success, the impact of training and competing on Henderson’ body makes progression very difficult, with heavy rest intervals needed for proper recovery. Fatigue plays a large part in CMT’s impact on the body, saying: “If I go out for a 10km run, it’s probably three days before I can run again, which makes it really difficult when you’re training for an IRONMAN or half-IRONMAN.”

Henderson hopes that he’s shown that people going through a whole range of problems still have the ability to achieve whatever they want, saying: “A lot of this is about awareness and what I would love is for people to see this and get a bit of inspiration.

He continued: “People do have a choice a lot of the time. The thing is with this condition is that if you sit down and become sedentary, that’s when everything seizes up and things get worse. If you keep moving, whilst it might be painful, you can do a lot to slow it down.”

Henderson’s journey has been aided by the amazing support that he receives from the people around him and he uses that to continue to push himself even further in the sport, saying: “You know what it’s like on race day, there’s so many people all there supporting and you can kind of get past it with just that. I see my kids on the finish line and stuff like that is a big boost for me, really gets me going.”