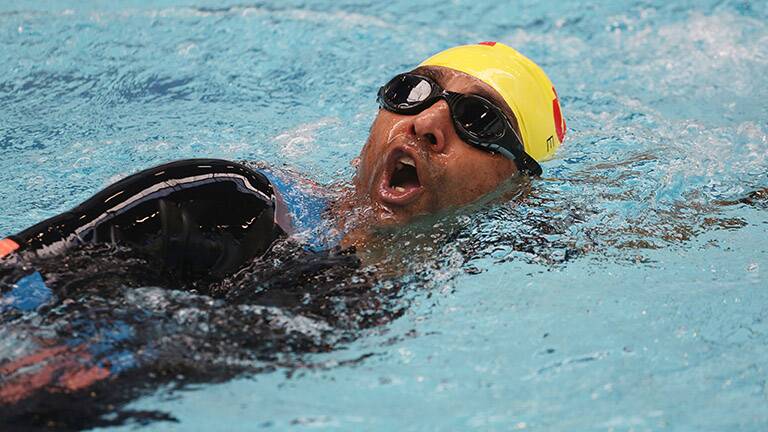 Motivating each other through the dark winter mornings

Getting up on a dark winter morning for a training session can be one of the hardest parts of winter training, but for participants joining GO TRI sessions in Redditch, they’ve been keeping each other motivated despite the icy and dark mornings.

Louise Morey has continued the GO TRI sessions she leads in the West Midlands over the winter months, with a particular focus on those who are starting out in swim, bike, run.

“The sessions are about building fitness and building confidence,” Morey said. “I’ve got people coming now that haven’t been swimming for three or four years and they weren’t swimmers before then either, so they just wanted to do something different.

“It kind of mirrors where I was 10 years ago because 10 years ago I couldn’t swim a length and just through perseverance and enjoying the sport that’s how I ended up getting into coaching. That’s how I try and engage people; it doesn’t matter what you’ve done previously, it’s what you can do now and in the future. It’s not necessarily about podium places it’s what you ultimately get out of participating or competing. I just like to inspire people to do that.”

Over the winter months, inspiration and motivation can be hard to come by but not for this group who have kept each other motivated despite early starts at Studley Swimming Pool on Saturday mornings.

“There’s been ice on the windscreen, and we’ve still had a full house of people attending the swims,” Morey commented. “That says something when people are committing to a swim on an icy morning at 7am on a Saturday. I’m amazed that people do it, but it does say a lot about the community that we have and how motivated people are to pursue their swim, bike, run goals.

“I wanted to create a little community, so I’ve created an online group. The group supports each other so, even though they’ll be up the next morning for a swim at 7am, they’ll be messaging the night before saying, ‘see you bright and early tomorrow morning’. That’s where the community is so important when you’re having to get up on a dark winter’s morning on a Saturday and you’re having to find the motivation.

“The community gives you that motivation and it builds such good relationships and people have used the community to go and train with each other even away from the sessions I put on.”

Away from the pool and activity has continued for the GO TRI participants including a focus on strength and conditioning as they work towards their goals for 2022.

“We were in the pool up until the week before Christmas, and strength and conditioning has been another focus of ours over the winter,” Morey added. “We post ideas on runs and we also use the indoor bike so people who want to join me we can do things together on Zwift or we do it on Zoom calls.

“In the winter I set-up the session the same way as I do my training so either a bit of a recovery period if you’ve been doing events up to the Autumn time, but I also focus more on the strength and conditioning in terms of volume rather than intensity. Then as we go along, we start to lift the intensity and start to think about other things and plan ahead like open water swimming during the summer months.”

“I try to do the same with GO TRI and introduce them to a few exercises and post different things they can do over the winter to incorporate into their week.”