Lisa Singleton started her triathlon journey during lockdown last year. She started the ‘Couch to 5k’ running programme and was tempted by open-water swimming while taking her son for kayaking lessons.

Singleton is a plus-size woman who has been very conscious of her size throughout her life. She has thoroughly enjoyed being encouraged and cheered on by her fellow triathletes because at times in her life she has been made to feel as though she could not take part because of her size.

Before long Singleton had entered herself into the AJ Bell World Triathlon Leeds event in June 2021 where her interest in the sport was solidified: “I absolutely loved it, it was fab. Seeing all the kids taking part too was amazing.”

Singleton said that she immediately felt comfortable and welcomed by everyone at Leeds and that the constant encouragement really kept her going: “Everyone was shouting my name and I was shocked as to how many people knew my name and then I realised it was on my shirt. The encouragement was fab though, even the kids were cheering me on.”

Singleton said she was the first one in the water and the last one in on the run and that fact didn’t bother her in the slightest. She had finished and she had enjoyed it and that was all that mattered. 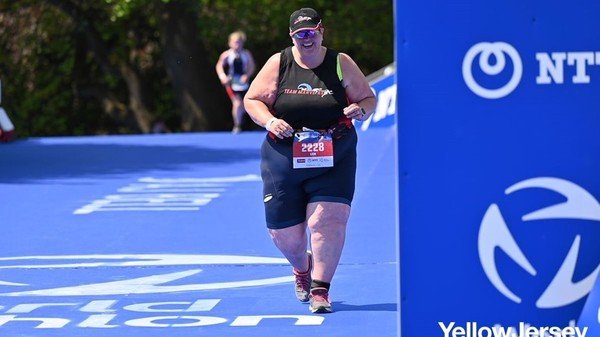 Having started triathlon training Singleton has said she feels a lot more confident in herself generally. She has not only competed in triathlon events but also marshalled at events too.

She said it was comforting to see that other people also had to walk parts of the run. One thing Singleton did mention however was the difficulty she found in finding sportswear that fitted her properly, trying to find a tri-suit or a wetsuit that fitted was a real challenge and an issue that she strongly wants to address.

“None of the big names have clothing for big-hipped woman,” she commented. “I know it’s not easy, but they should maybe operate a made to order system.”

She also comments that certain bikes have weight limits on them and as such you have to be careful which tyres to have. Not being able to access/wear the same kit as everyone else can make people feel very excluded and is a major factor why plus-size people might choose not to get involved. Therefore, this message from Singleton is an important one.

Being involved in triathlon has helped Singleton be more confident in herself as well as allowing her to make a new group of friends who encourage her in her endeavours. Her advice to any plus-size people considering joining in is: “Bite the bullet, put your shoes on and go. Don’t let your size dictate what you should do.”

At her club, Manvers, Singleton remarks that she is told all she needs is a ‘want’ and that if she needs to walk then she will just walk. We need to spread the message that sport is not just for the fittest. As Singleton says: “If you want to run you can run, it doesn’t matter if you’re slow. We shouldn’t let what society deems too big dictate what we do.”