The Transplant Triathlete: The Story of How One Man Went from Illness to Ironman

'Transplant Triathlete' tells the story of Diccon Driver, a member of Greenwich Tritons who took up triathlon after being diagnosed with kidney disease. He refused to let his condition stop him from racing and even after doctors told him his dream of finishing an ironman was impossible, he didn't give up. With just 20 per cent kidney function, he proved them wrong to complete his first ironman.

We speak to Diccon to find out more about his triumph over kidney disease...

When were you first diagnosed with kidney disease? What was your reaction to your diagnosis?

I was first diagnosed about 10 years ago. At first I was terrified and confused – but after some research I found that it was a condition that can take years to eventually lead to total kidney failure, so I decided to try and stay as fit and healthy as possible.

How did you begin to get involved in triathlon? What was your first race like?

I saw an ad for the London Triathlon one day in 2007, while I was biking to work. At the time I was training to do the London to Brighton, but after seeing this ad I decided to do a triathlon instead. As I lined up at the start of the race I could just about swim 1.5k – I had a hybrid road bike and little idea about what I was doing. But I loved it. I knew then, that I’d found a new hobby. But I had little idea of just how much it would help me through my disease. Both mentally and physically.

How did triathlon help you to cope as your health gradually deteriorated?

It kept me feeling positive. While I was training and racing, I didn’t feel like the disease was getting the better of me. It also helped keep my blood pressure low – which is vital for people with kidney disease. 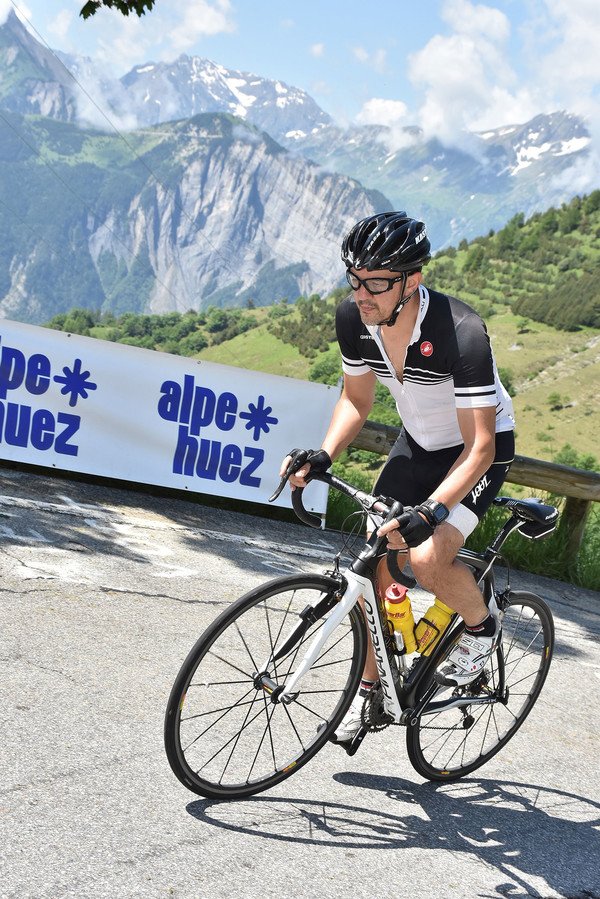 You went on to complete the Outlaw long-distance triathlon with your kidneys only functioning at 20% - tell us how your training and race day went.

My last couple of months training for this were really hard. And as my condition got worse, my red blood cell level continued to drop. To this day it’s the hardest thing I’ve ever done. A Doctor, a couple of months before the race, told me that what I was attempting in my condition was impossible. But sheer will power got me through.

The swim was tough but I took it very easy. Incredibly, I actually felt quite good on the bike. But on the run, I really stated to suffer. My kidneys weren’t getting rid of enough liquid from my body and my hands and feet started to swell up. 10k from the end I was close to stopping. But something inside me pushed me on. And I eventually finished in 13hrs 26mins. 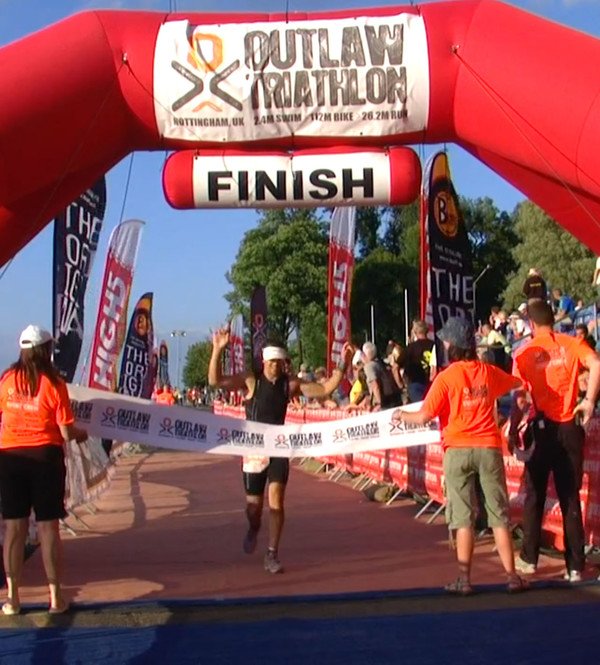 How did going onto dialysis effect your lifestyle? Were you able to continue swimming, cycling and running?

It was horrible. I’d gone from being really quite fit to struggling to do a 10k in under 1hr 2mins (which I did while I was on dialysis). The actual process was painless, but boring, 4 hours on a machine in Guys hospital 3 x a week. I couldn’t swim, because the exit site of my dialysis tube couldn’t get wet. I could still cycle, although with such little energy every tiny hill felt like I was summiting Alpe D’Huez. And running was manageable, but it took all my will power to just get out the door.

You then received a kidney donation from your brother, tell us how the surgery and recovery went.

Compared to dealing with the disease the operation was actually relatively easy. The biggest concern I had was what might happen to my brother. What if something went wrong? How would I live myself? I wrestled with this right up until the point I was in theatre going under.

The surgeons told me that despite how ill I felt – I was still in pretty good shape compared to the general public, so I should recover very quickly. And they were right. Within just 5 days I was back at home. And in 6 weeks I was back in work. 6 months later I was back in training for an Ironman 70.3 in Germany. 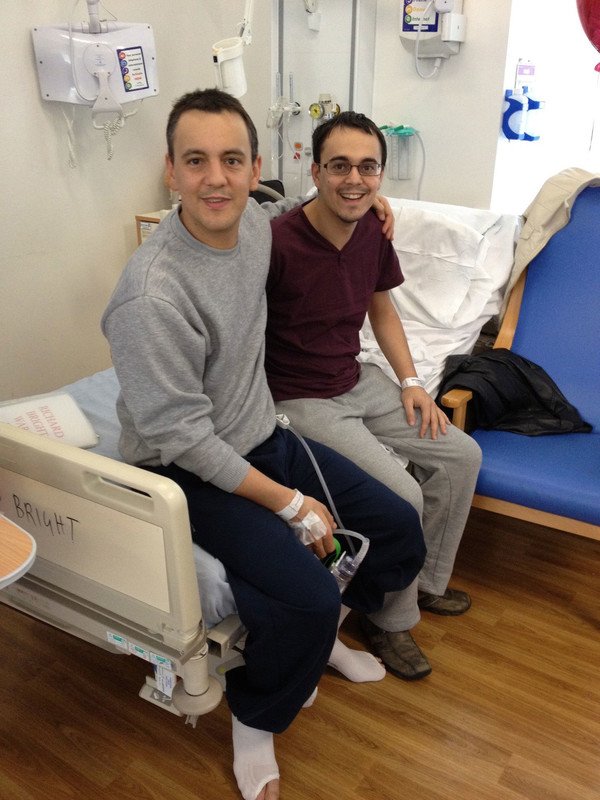 What was your 'come back' race after recovering from your kidney transplant? How did the race go?

The race I chose as my comeback race was an Ironman 70.3 in Wiesbaden, Germany. With over 1500m climbing on the bike section I knew it would be a real test. But I felt great. My brother’s kidney had not only given me my life back. It had given me my fitness back.

Despite how hard the bike was I finished it with a PB and I really felt that this was a full stop to all the suffering I’d gone though with the disease. I was now better and fitter than I’d ever been.

But, as I say in my book – there’s only one real hero in this story. And that’s my brother. My brother Mark Driver

What are your triathlon plans for future?

Since my op I’ve raced in Germany, Austria x2, Mallorca, Switzerland and last year in Budapest (all 70.3) where I managed a new PB of 5hrs 23. I now intend to keep racing, for as long as possible. I’ve already started plan my next race for 2017.

At the moment I’m sticking to 70.3s as I my wife recently gave birth to our first child. But one day I’ll do the full distance again. Just to see how fast I can do it now I’m well again. 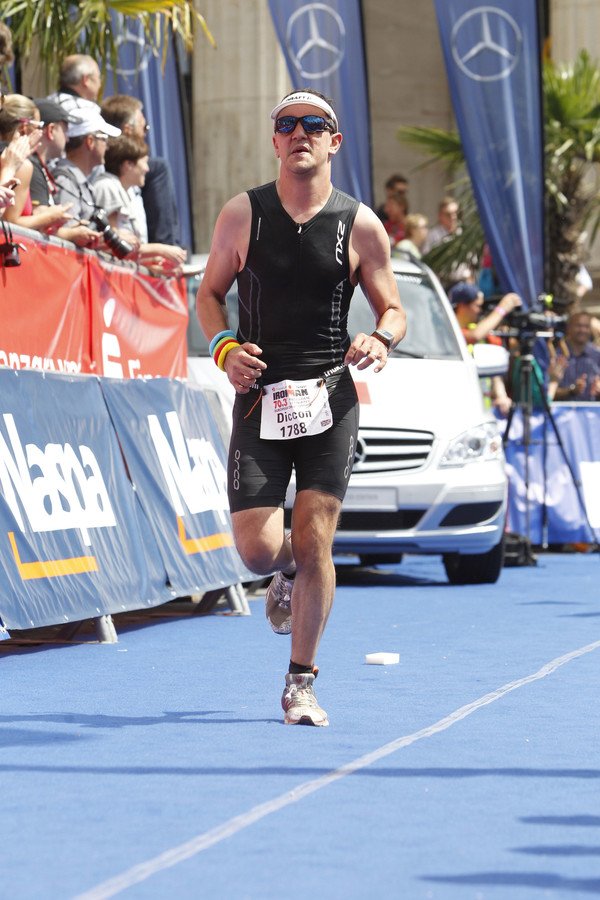 Transplant Triathlete is on sale now, buy your copy via Amazon. Diccon's book was written with the aim of encouraging more people to sign up to become organ donors, which you can do here.

Interview by Lucy Edwards from Havering Triathlon Club. You can follow her on Twitter @paddlepedalpace or her blog at www.paddlepedalpace.co.uk