Swim, Bike and Rerun: A Grand Final to the 2014 World Triathlon Series

After seven races in five different continents, the men’s and women’s World Triathlon Series (WTS) winners were set to be crowned in Canada’s ‘City of Champions’ with Jonathan Brownlee and Jodie Stimpson both still in contention.

Brownlee sat 282 points behind series leader Javier Gomez (ESP), giving him a strong chance to overcome the man who pipped him to the top of the podium the year before.

With Gwen Jorgensen (USA) having won four of the seven races so far, it would be an uphill battle for Stimpson to leapfrog her and her compatriot Sarah Groff.

Speaking ahead of the final race, Stimpson said: “If I finish third, if I finish second [I’ll be happy], obviously I’d prefer to finish second. My main goal is just to go out there and have a solid race.” 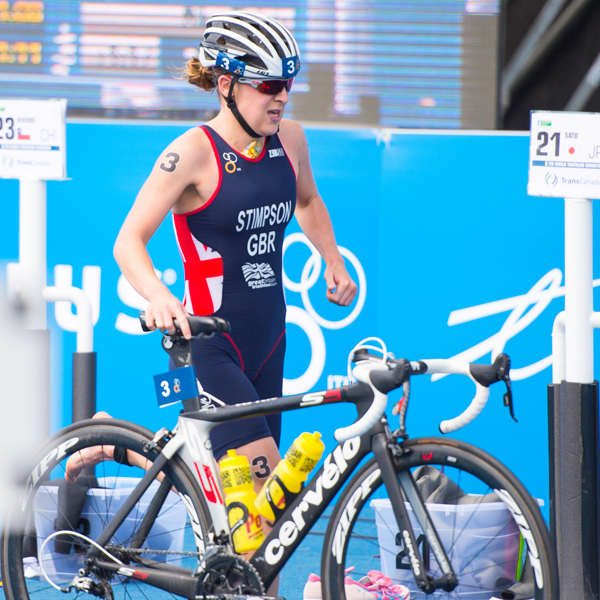 Above: Stimpson went into the Grand Final aiming for an overall series podium finish

A long trail of athletes exited the water; however it wasn’t long before a lead group emerged on the bike which included both Brownlees, Javier Gomez and Kristian Blummenfelt (NOR).

Midway through the bike course, the chase group, including Mario Mola (ESP) who was also in contention for the overall podium places, caught the leaders to create a chain of 50 cyclists all powering along together.

Alistair, Blummenfelt and Reinaldo Colucci (BRA) made a break late on, hoping to set themselves up for the run and entered T2 with a lead of over 90 seconds. This left Jonathan racing alongside Gomez and Mola in the chase group, knowing he needed to overcome both of them and his brother to have a chance of becoming world champion.

It wasn’t long before Alistair left the other two behind to establish a commanding lead on his own, with the Norwegian and Brazilian swallowed up by the chasers. By this point, the two Spaniards had dropped Jonathan and were battling against each other for second and third.

Alistair crossed the line with Yorkshire flag and Union flag in hand to win, with Mola taking second in the race and series, and third being enough to secure Gomez the series title. 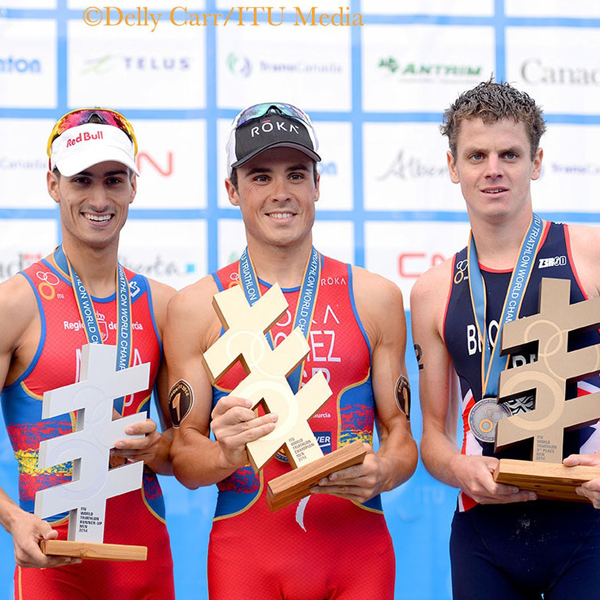 Jonathan finished fourth in the race, earning him the final spot on the series podium, whilst Alistair’s win brought him up to fourth overall.

Jodie Stimpson and Lucy Hall were the sole Brits to race in the series ending women’s race in what was the second time the Grand Final had been hosted in Edmonton.

Hall had a typically good swim, coming out amongst the leaders and cycling well with them to increase her chances of a good race finish. Stimpson however, struggled in the swim and found herself left behind by the leaders as she made it through T1.

She found herself cycling for much of the 43km bike leg with Flora Duffy (BER) and series leader and overall favourite Gwen Jorgensen (USA).

With Stimpson and Jorgensen way back in the chase pack, Sarah Groff (USA), was doing everything she could to give herself the best chance of mounting a charge for the overall title by pushing the lead group forwards.

Groff set off with Andrea Hewitt (NZL) and Nicky Samuels (NZL) for the 10km run, knowing that they’d have to run well to maintain their lead over Jorgensen.

A famously strong runner, Jorgensen made up a deficit of almost a minute on the leaders to soon take charge of the run and come across the finish line at a canter to claim her fifth consecutive race win and first world title. 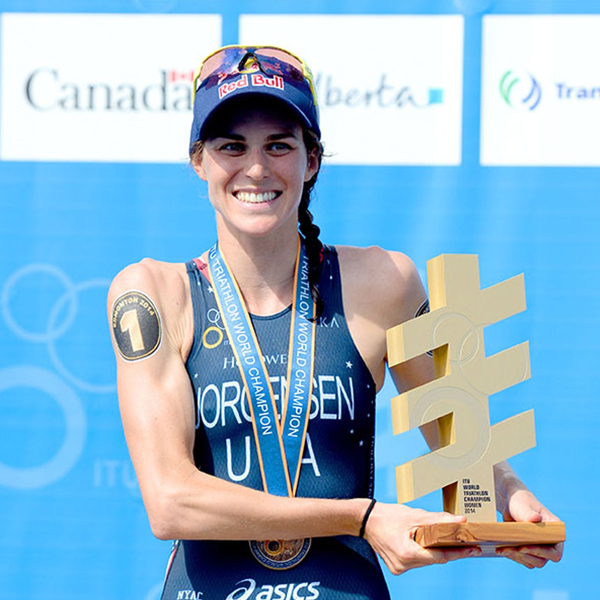 Above: Jorgensen won the women's series in 2014

The 25th anniversary of the season ending event also saw World Championship races for Junior, U23, Paratriathlon and Age-Group athletes, with a number of British athletes taking part.

Marc Austin, Gordon Benson and Grant Sheldon represented the team in the U23 races, with no British females taking part in the race.

The three Brits all made it into the lead bike group after a fast swim. Navigating the 40km ride, this group stayed together throughout, with Austin, Benson and Sheldon helping to push the pace.

By the time they reached the 10km run, the lead pack was starting to spread out and a top three of Austin, Benson and Dorian Coninx (FRA) emerged.

The Frenchman won the junior world title in London the year before and was looking to become only the second person to win the junior and u23 titles, joining Alistair Brownlee with that record.

As Coninx stretched out his lead and made a break for the line, Austin and Benson battled it out for the order on the podium. Austin proving the stronger runner to build a ten-second lead over his compatriot and take second place. Sheldon finished in sixteenth. 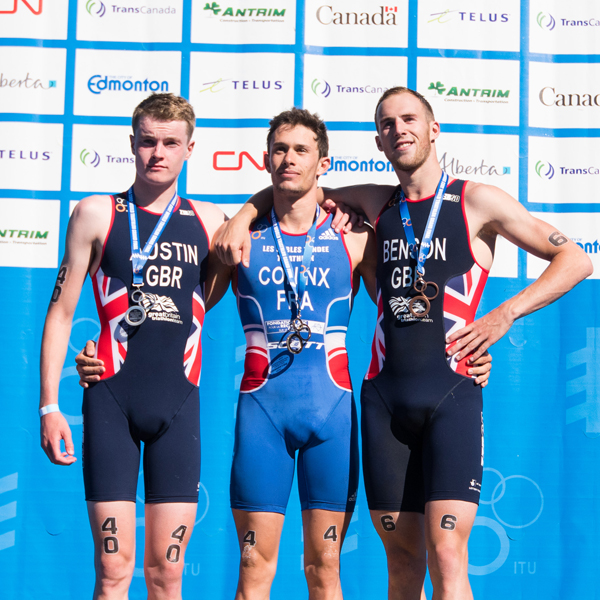 Above: Second and third in the men's U23 race

Austin had also made the step up from junior level having finished second to Coninx in 2013, with Benson moving from fifth in the junior race to third in the u23s.

Britain were represented by Christopher Perham, James Teagle and Sophie Coldwell in the junior races, with the latter achieving fourth place in the women’s race.

In her final event as a junior, Coldwell was well-placed coming out of the swim and was part of the lead bike group across the 20km course as seven athletes worked together to pull clear of the chasers.

Onto the run, Coldwell found herself running just behind Laura Lindermann (GER), Cassandre Beaugrand (FRA) and Audrey Merle (FRA) in an all European battle at the front of the race.

The German took the win, with Coldwell saying of her fourth place finish: “I said I’d be satisfied with top eight and pleased with top five, so I’m really pleased.”

In the men’s race, Perham finished fifteenth and Teagle twenty-second.

The senior athletes won the World Championship earlier in the year, with the quartet hoping to match them and make it two-from-two for GB.

Coldwell was the first of the four to take on the course showed her strength from the start, quickly establishing herself at the front of the first leg to hand over to Perham in fourth.

A tight group saw Perham racing against the American, German, Canadian and Australian athletes as he set the fastest leg time of the GB team to maintain that fourth place.

Lucy Hall managed to overturn the ten-second deficit on the German leaders in her swim, passing three other nations to start cycling with Jamnicky from Canada. Hall was part of the senior team to win and hoping to add this title to her collection.

She soon left the Canadian behind and pushed on her own to bike and run to a lead before handing onto Benson. 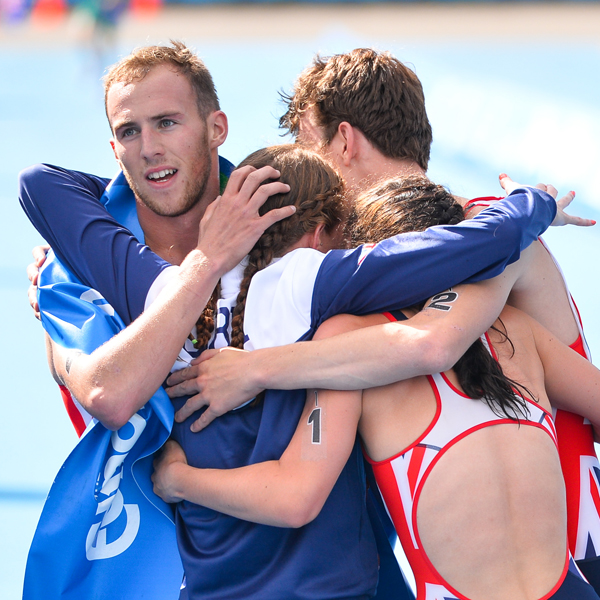 Above: Benson was greeted by his teammates at the finish

Despite the best efforts of Birtwhistle (AUS) and Mislawchuk (CAN), they were only able to make a small dent in the lead that Benson had inherited and, as he reached the line, was joined by Coldwell, Perham and Hall to celebrate winning gold.

Australia finished second, with Canada third in front of their home crowd.

The event also consisted of the Paratriathlon World Championships which you can see in a separate Swim, Bike and Rerun here.

Great Britain’s Age-Group Team headed out to Canada to compete in the Age-Group Sprint and Standard Distance World Championships.

Fifteen medals were won in the sprint distance, with two golds, eight silvers and three bronzes awarded to the team in Canada in what were competitive races for the GB team.

In the standard distance race a couple of days later, the team won three golds, one silver and five bronze medals, with Neil Eddy (M25-29) winning the first gold of the day having finished fourth in the two previous years.

You can read full recaps of the Age-Group racing on the buttons below.