A historic year for the sport, 2016 brought with it the debut of paratriathlon to the Paralympic Games and the World Paratriathlon Event Series took on a new level of significance, playing a key role in the athlete’s qualification process.

The campaign kicked off in style, with Paralympic qualification for two of the biggest names in the sport.

The World Paratriathlon Event Series in 2016 kicked off with a shower of medals for British athletes. Lauren Steadman and Alison Peasgood travelled to Buffalo City, South Africa with hopes of meeting the British Triathlon automatic qualification criteria for the Games. Only gold would secure this for the two athletes, and both delivered in great style.

Steadman topped the PT4 category, a victory that would qualify her for her third Paralympic Games, having attended both the Beijing 2008 and London 2012 Games as a swimmer. 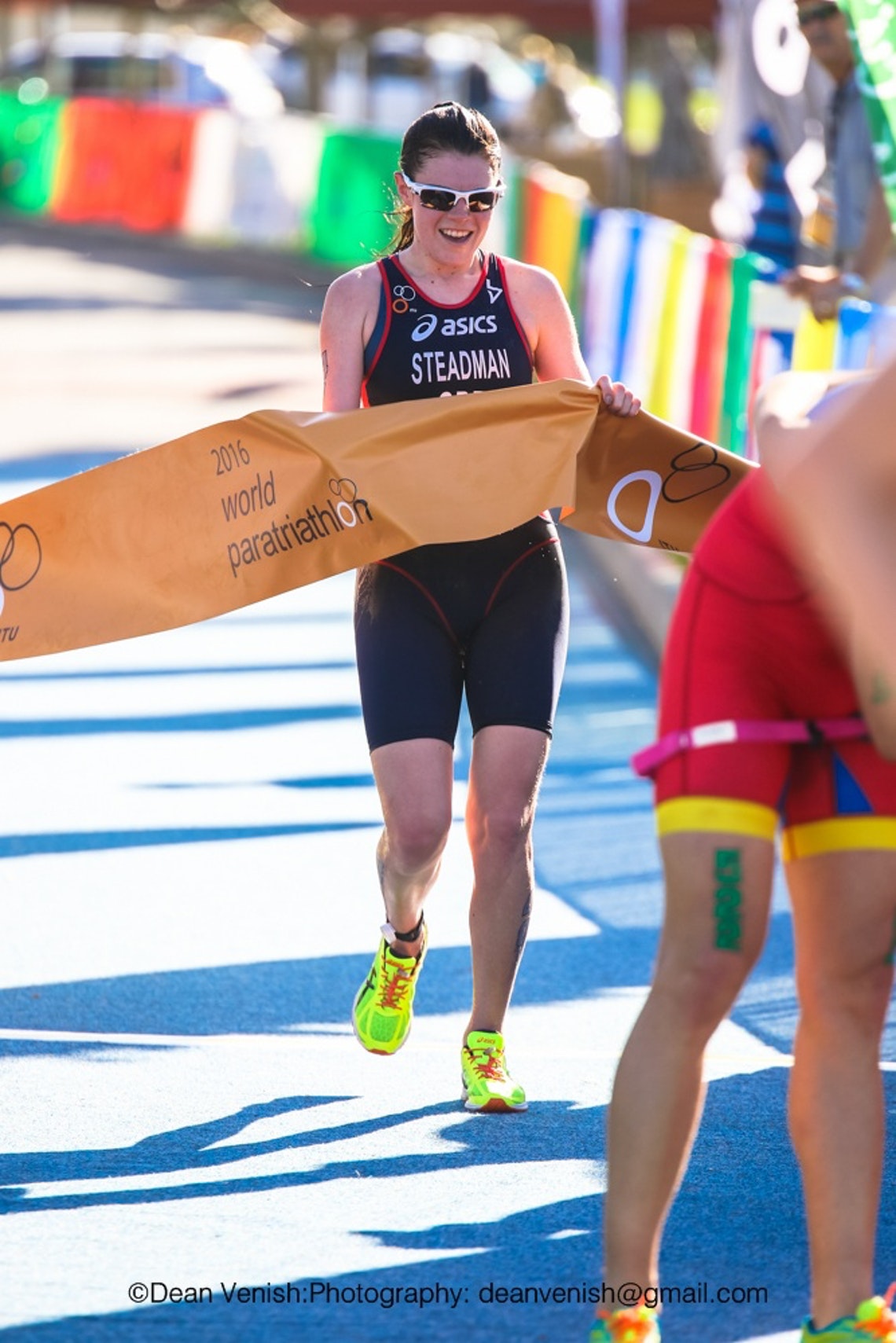 Above: Lauren Steadman takes the tape at Buffalo City.

Reflecting on the race, Peasgood commented: "It was a good race with lots of learning, racing with a different guide. I'm really happy to have secured my spot for Rio and really excited for the season ahead."

The medals didn’t let up there for British athletes, however. An excellent start to the season saw the Great Britain team win three gold, two silver and one bronze medal at Buffalo City. Ryan Taylor, a former England cerebral palsy footballer, who won bronze at the 2015 world championships, took home gold in the men’s PT2 event. 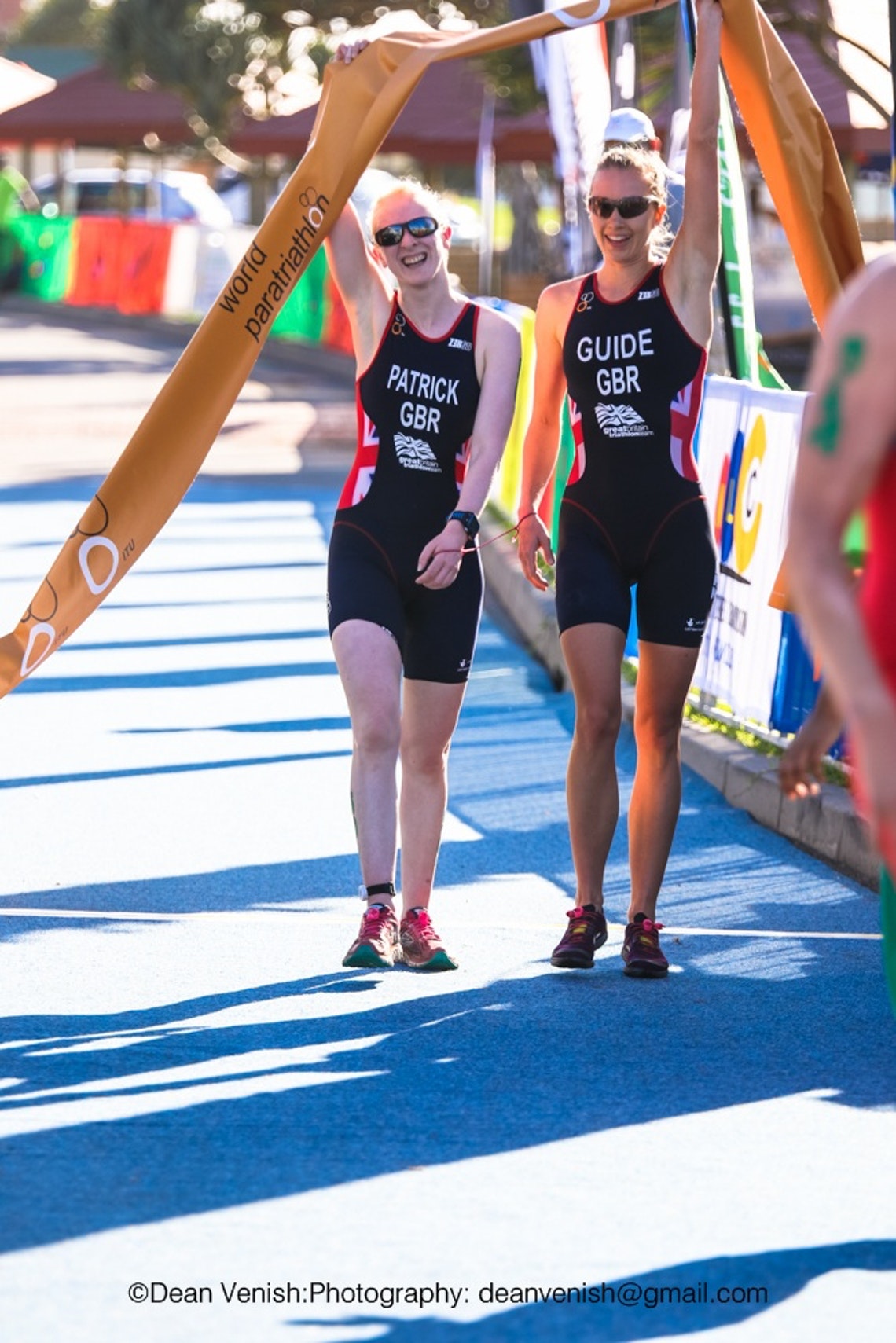 The day’s medals were rounded off by Melissa Reid’s bronze in the PT5 category, alongside her guide, Hazel Smith. This first weekend was a shining example of British success that would continue throughout the year.

The next event brought athletes to Australia for the Penrith ITU World Paratriathlon Event in April. Here,  a number of Britain’s Paralympic hopefuls made their debut for the 2016 international season, including George Peasgood, Andy Lewis, Joe Townsend and Clare Cunningham.

Peasgood, who naturally pulls away from his competition during the swim and bike, put his advantage to good use, holding on to a big lead for the duration of the run and comfortably taking gold.

Andy Lewis began an historic year with an exhilarating victory in the PT2 event. Lewis dominated the race, recording the fastest splits across all three disciplines.

The PT1 race threw up some stiff competition for Joe Townsend, including five-time ITU world champion, Bill Chaffey (AUS). Whilst beaten on the day by his antipodean counterpart, Townsend clocked the fastest bike and run times, securing the silver medal and a great start to the season.

In May, Paratriathlon took over two continents simultaneously, with some athletes competing at an event in Aguilas, Spain and others alongside the World Triathlon Series event in Yokohama, Japan. Across the weekend, Great Britain won one gold, two silver and two bronze medals.

Competing at the World Paratriathlon Event in Aguilas, Melissa Reid won an excellent gold medal with Hazel Smith in PT5. Reid put down the quickest swim time and held her lead for the entirety of the race, finishing ahead of Spain’s Susana Rodriguez, who had been a strong PT5 competitor, taking the 2015 ITU World Championship title in Chicago.

British Triathlon Head Coach, Jonathon Riall, said: “Melissa and Hazel were racing for the second time together and with a revised race plan, so it was fantastic to see the result fell their way.”

Aguilas also saw Kerry Large on the international stage for the first time. Large made a statement with her debut, crossing the line in 2nd place as she raced alongside compatriot, Ruth Wilson. Both athletes were part of British Triathlon’s talent ID programme. Steve Crowley achieved a top-ten finish in the men’s PT4.

Crossing over to Japan, medals were being won there too, as Mark Conway secured his first World Paratriathlon medal, winning bronze in the PT1 race. Also, in Yokohama, Chris Frost finished 11th in the PT4 event.

British athletes didn’t have to travel far for the next event. Taking place in sunning Scotland, an all British podium was achieved at the World Paratriathlon event in Strathclyde. Lauren Steadman headed a PT4 podium that also saw Kerry Large and Ruth Wilson take the 2nd and 3rd spot.

After returning with the European title from Lisbon’s ETU Championships a week prior, Lizzie Tench with another dominant victory, crossed the line 20 minutes before Irish competitor, Fiona Mccormack.

Phil Hogg remained consistent and took yet another bronze medal, battling all the way to the finish and ultimately earning his place on the podium alongside a Dutch one-two of Jetze Plat and Geert Schipper.

The final event before the world championships took place at Besancon, France. Britain had provisionally secured eight Paralympic slots at this point, making it, along with the USA, the most represented paratriathlon team at the Games.

Before the event, Head coach, Jonathon Riall commented: “In many ways it’s a crunch weekend for our PT4 guys. I’m hopeful of them securing a slot for Rio, but they need to go out there and put together good performances this weekend.” 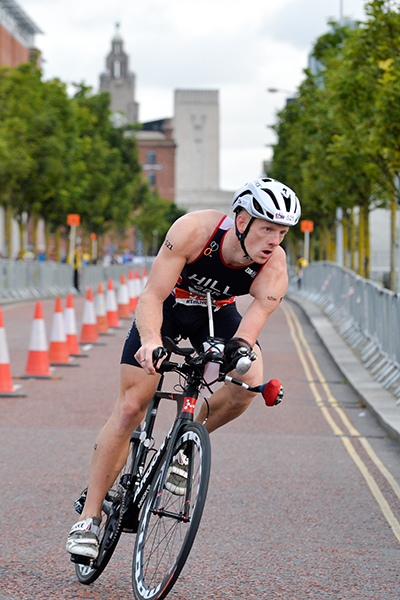 Above: Dave Hill powering through on the bike.

Besancon saw another host of dominant British performances. Faye McClelland, in PT4, won gold in a race that was promptly switched to the duathlon format due to a flooded river. McClelland adapted to the conditions and kept her focus to top the podium, finishing ahead of France’s Gwladys Lemoussu in 2nd and teammate Kerry Large in 3rd place.

Bronze medals were also awarded to PT1 athlete, Joe Townsend and PT4 athlete, Dave Hill. Both had strong race, with Townsend carrying a lot of confidence in his races after securing his Paralympic qualification slot.

Great Britain’s paratriathletes returned home to look ahead at the ITU World Championships in Rotterdam on 24 July. This would be the final event before the sport would debut at the Paralympic Games in September on Copacabana Beach in Rio.

All the action from the 2016 World Championships will be featured in a future Swim, Bike and Rerun, as we take you through the best of what 2016 had to offer for British paratriathletes in an historic year for the sport.