It was a very successful trip to Austria in 2014 for the British paratriathlon team, winning three golds, six silver and two bronze medals.

The team recorded a number of one-twos across the championship, including in the Men’s PT5 race which saw Chris Goodwin finish ahead of Dave Ellis to top the podium.

Goodwin was guided by Jack Peasgood in Kitzbühel, with the pair finishing in 01:01:32. Later in the year, Ellis would go on to overturn the result to win the British Paratriathlon Championship ahead of Goodwin in Liverpool.

Melissa Reid and Alison Peasgood also shared a podium in the parallel women’s race, this time recording second and third as Susana Rodriquez of Spain took gold. In what was a tight race, Reid almost did enough to close the gap to the Spaniard, but Rodriquez did enough to hold on for gold. 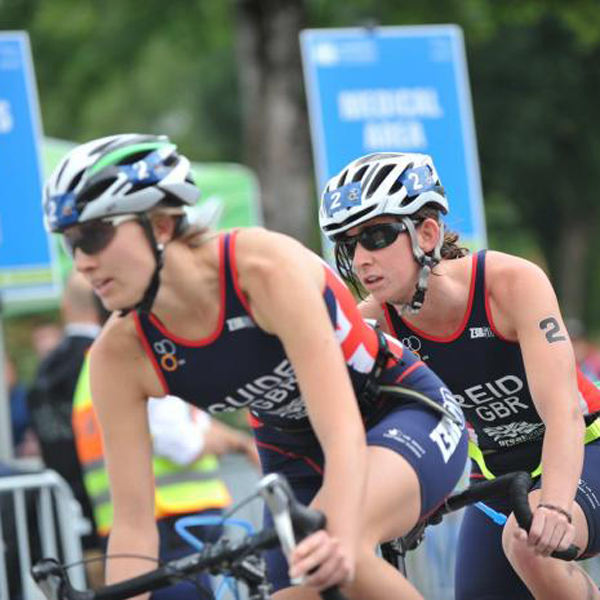 Above: Melissa Reid took second ahead of compatriot Alison Peasgood

Also winning silver and bronze for Great Britain were Phil Hogg and Joe Townsend in the Men’s PT1 category. Hogg crossed the line thirty seconds ahead of Townsend to take silver, however neither could match Dutchman Jetze Plat who took gold six minutes ahead of Hogg.

A relative newcomer to the sport, Plat, who comes from a handbiking background, showed his strength across all three disciplines to finish in under an hour. Britain’s third representative in the race, Mark Conway, finished 8th.

There was also a British one-two in the Women’s PT4, where pre-race favourites Lauren Steadman and Faye McClelland come first and second. 21 year-old Steadman defending her title ahead of four-time world champion McClelland.

After the race, Steadman said: “I didn’t think I would retain my title, I really didn’t but it’s been nice and there was some great support on the run when it was just a case of holding on.”

Britain looked close to completing a clean-sweep of the podium until Irene Riviera (ITA) overtook Clare Cunningham on the final lap of the run. Cunningham finishing fourth.

The third of Britain’s one-twos came in the Women’s PT1 category, where Karen Darke showed her strength on the bike leg to finish ahead of compatriot and world champion Jane Egan.

Despite coming out of the swim with an eight minute deficit on Egan, Darke’s superior bike and run legs saw her overcome this to win by more than three minutes. Egan crossed the line seven and a half minutes ahead of Rita Cuccuru (ITA) in third place.

Following her victory, Darke said: “I loved the climbs here, although I did not expect to go this fast. It’s great to win the gold here.”

The team’s other medal was secured by Sarah Pearson in the Women’s PT3 race as she won the silver medal in Austria.

Britain were also represented in the 2014 Paratriathlon European Championships by Russell White (PT3) who took fifth, David Hill and Chris Frost (both PT4) who finished fourth and ninth respectively, and Iain Dawson (PT5) who took sixth.