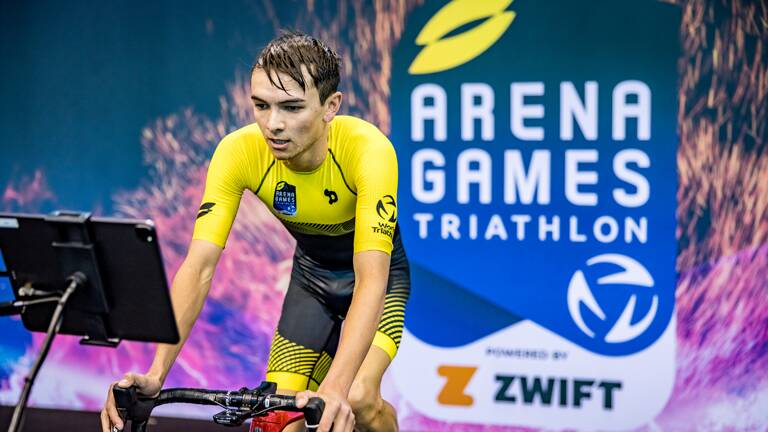 After two rounds of action in Munich and London, the Arena Games Triathlon Series powered by Zwift is set-up for a spectacular Grand Final in Singapore where British triathletes have the chance of being crowned the first ever esports triathlon world champions.

With each athletes’ best finish from across the two events counting towards the overall standings along with their finish from this weekend’s Grand Final, where double points will be on offer, Beth Potter, Jess Learmonth, Georgia Taylor-Brown and Alex Yee are still in contention to claim the World Championship titles this weekend (6-7 May).

The Arena Games Triathlon Series powered by Zwift blends real life and virtual racing across swim, bike, run consisting of a 200m swim, 4km Zwift bike and 1km Zwift run using self-trainers and self-powered curve treadmills, although the order reverses to run, bike, swim in the second stage of the final before the final pursuit.

A total of nine British triathletes will be competing in Singapore, with the heats on Friday (6 May) and repechages and finals on Saturday (7 May).

Potter arrives in Singapore with maximum points after her dominant victory at the opening event in Munich, and, with London winner Cassandre Beaugrand of France not competing, Potter is the only athlete on the women’s start line with 250 points.

However, with 500 points for the win in Singapore, up to four other athletes could still claim the women’s inaugural World Championship title including Olympic champions Learmonth and Taylor-Brown.

Learmonth, who won the inaugural Arena Games title in 2020, was third in London, and if Learmonth was to win in Singapore and Potter finish second then Learmonth would take the title by a single point.

Taylor-Brown secured her highest Arena Games finish with fourth in London and could still claim the world title if Potter finishes outside the top-two.

Learmonth and Taylor-Brown will both line-up in the first heat, while Potter will be in heat two, which will also feature Sian Rainsley, who finished sixth in London.

In the men’s event, Yee’s second-place finish in his home city last time has put the Olympic gold and silver medallist in contention heading into the Grand Final.

Aurelien Raphael of France and Germany’s Justus Nieschlag both arrive in Singapore with maximum points after their wins from Munich and London, respectively, but a win this weekend would secure Yee the title.

The men’s event has three heats with Yee in heat three, alongside Raphael. Gordon Benson has been ever-present in this year’s Arena Games Triathlon Series finals and will be in heat two in Singapore with fellow British triathlete Dan Dixon.

Harry Leleu reached the final in London and he will be hoping to do the same this weekend when he competes in heat one, which also features Cameron Main.

Although a similar format to Munich and London with the heats split into two stages and the final over three, including the final stage contested over a pursuit, there will be a different look to the Grand Final which will swap the indoors of an aquatics centre for the outdoors.

The swim legs will be an outdoor swim at Martina Bay Reservoir, while the bike and run sections will also take place outside, although remaining on Zwift, with drafting disabled like in London.