Three events were scheduled in for 2018’s World Paratriathlon Series (WPS) and medals were a plenty for athletes sporting the colours of Great Britain.

With the Grand Final taking place on the Gold Coast in September, British athletes looked to establish themselves amongst the world’s best in Japan and Italy before travelling down under.

The season was kicked off in great style, with Great Britain’s paratriathletes taking seven medals from seven starts at WPS Yokohama.

Following his historic win at the 2018 Commonwealth Games, Joe Townsend (PTWC) continued his fantastic form with a 3rd place finish in Japan. Leaving the swim in last place, Townsend had to regain around two minutes to stay competitive and did so across the final two disciplines. With the Netherlands’ Jetze Plat and Geert Schipper taking a one-two podium, Townsend was in good company, crossing the line in 01:02:01 to join them on the podium. 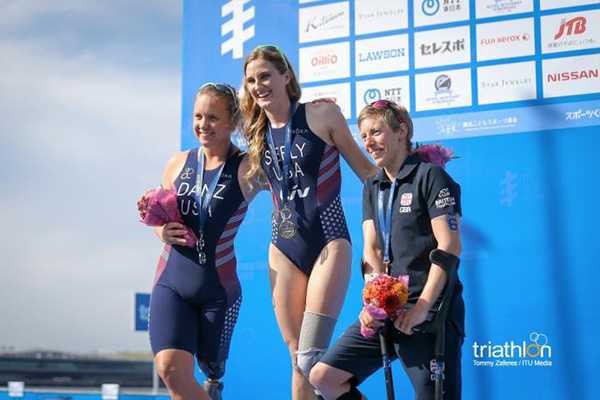 Above: Fran Brown on the podium for the first time in 2018.

Fran Brown in the PTS2 category secured her first medal of the year. She took bronze, sharing the podium with Hailey Danz and Allysa Seely of the USA. Brown came out of the water in third and pushed hard on the bike, recording a time of 00:36:39, which was around a minute and a half faster than any of her competition.

In the PTS3 category, Ryan Taylor won the silver medal. He left the water in first place but was chased by Australia’s Justin Godfrey during the cycle. Taylor did however hold firm for the rest of the race, recording the fastest run split (00:20:08) and taking silver.

Taylor commented: “I tried a new warm up today which worked well with my best swim. I’m disappointed with my bike but I had a good run and happy with my overall performance.”

Like Taylor, Steve Crowley excelled in the swim of the men’s PTS4 category, leaving the water in second place. Crowley’s transition was 39 seconds faster than first place at the time, Alexis Hanquinquant, reducing the Frenchman’s lead to zero.

The three who took the podium were all tightly matched on the bike, all completing the section within half an hour. Ultimately the race finished with Hanquinquant taking the tape, followed by the USA’s Jamie Brown, with Crowley crossing the line soon after to claim the bronze medal. 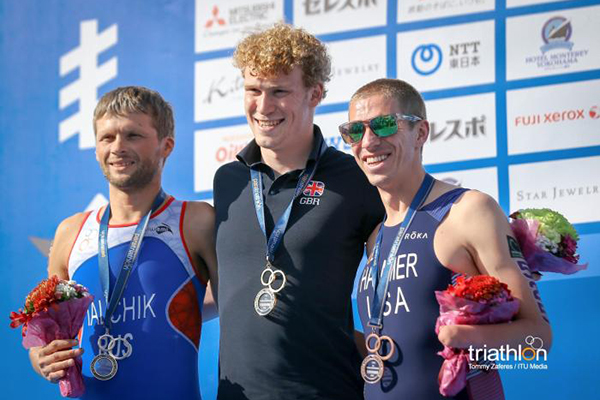 Continuing the trend of British athletes leading from the start line, George Peasgood (PTS5) powered through the swim and entered the first transition 2 minutes ahead of eventual 2nd place finisher, Alexandr Ialchik (RUS). This was an important cushion for Peasgood, which he built on with a sub-30-minute cycle.

Ialchik and the USA’s Chris Hammer both put down strong times in the run which allowed them to secure the 2nd and third spot in the podium. However, Peasgood’s dominant performance saw him finish 35 seconds ahead of his competition. This was Peasgood’s first WPS victory, coming just one week after he took silver in the road time trial at the para cycling World Cup in Ostend, Belgium.

After the race, Peasgood said: “It was awesome to come out here and perform as well as I did. I’ve had a tough few weeks travelling and racing so my legs didn’t feel too fresh but I’m in good shape. Being a swim-biker, it’s always going to come down to the chase on the run but thankfully I held off today.” 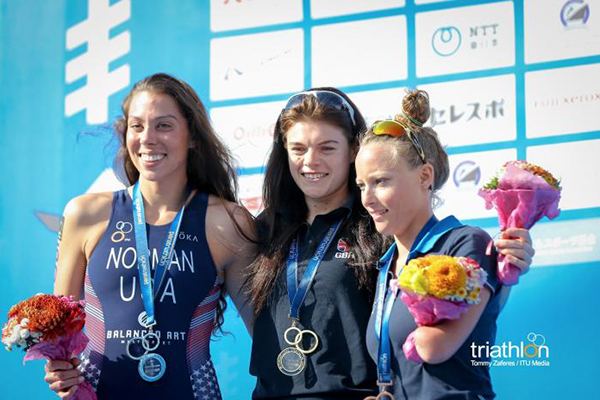 Above: Lauren Steadman taking the top spot on the podium.

Lauren Steadman dominated the women’s PTS5 race, recording both the fastest swim and bike times as well as almost matching the USA’s Grace Norman on the run. Norman took the tape at the Rio Paralympics in 2016, a race in which Steadman fought hard to secure an impressive silver.

The pair left the swim with only a second between them, with Steadman coming out of the first transition 11 seconds ahead of the American. It was here that the race was won, Steadman pushed hard on the bike and put 2 minutes between her and Norman. After completing a solid run, Steadman crossed the line in 01:06:39 to take home the gold.

Steadman took the win from Norman for the first time in over two years, commenting: “I’m really pleased to be back on top of the podium, it’s been a while! I wasn’t sure how the first race of the season would go. It sets me up nicely for the season ahead.”

The third gold medal for British athletes came from PTVI’s Dave Ellis, who was guided by Carl Shaw. Ellis was the only athlete on the field to complete the swim in under 10 minutes. His impressive start allowed him to increase his lead on the bike, recording the fastest split of the race (00:28:29) and running to a victory more than a minute faster than Spain’s Jose Luis García Serrano in 2nd place.

This was Ellis’ second consecutive WPS Yokohama win, commenting: “It’s a great start to the season and I’m very happy to be back on top of the podium.  It was good to be quicker in all elements of the race, producing a time two minutes quicker than last year.”

Head of the Paratriathlon Programme, Jonathon Riall was delighted with the overall team performance: “It’s been a super start to the season with some real steps forward for the team.

“It has been a winter full of effort, change and challenge, which seems to have helped move things forward.  All athletes medalling gives a real buzz to the day.”

This event marked Brendan Purcell’s final outing as British Triathlon Performance Director, and he expressed his pride in the squad, saying: “To get everyone on the podium is testament to Jonny Riall’s hard work getting them into the right mindset when there is uncertainty about which categories will go forward to the Paralympics. Our team just got on with it and delivered an excellent set of results.”

On 30 June, British paratriathletes travelled to the Iseo – Franciacorta ITU World Paratriathlon Series event in Italy, as temperatures hit 36 degrees. Hoping to build upon a successful season opener, a group of eleven athletes took to the track with the likes of Paralympic champion, Andy Lewis and Paralympic silver medallist, Alison Peasgood taking to the WPS start line for the first time in 2018. 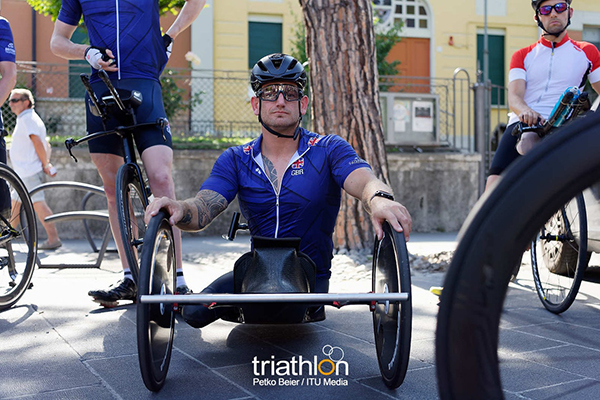 Above: Joe Townsend prepares for action in Italy.

Commonwealth Games Champion, Joe Townsend won bronze in the men’s PTWC category. He raced in a world-class field that included all of the Paralympic medallists from Rio 2016. The top two on the podium mirrored that of the Paralympic race, with Jetze Plat and Geert Schipper of the Netherlands occupying 1st and 2nd. However, it was Townsend who secured the bronze this time, racing consistently across all three disciplines to take his second WPS bronze medal of the year.

Paralympic Champion, Andy Lewis, won silver in the men’s PTS2 category on his first WPS outing of the year. He kept pace with the USA’s Mark Barr, beating his pace on the bike and took silver from 3rd place Mohamed Lahna by seven seconds.

Returning to racing after having surgery on her elbow, Fran Brown came back in fine form and won silver in the women’s PTS2 category. Brown raced against three Paralympic medallists from the USA, beating both Hailey Danz and Melissa Stockwell to take 2nd place by over a minute.

Another British silver came when Ryan Taylor crossed the finish line in the men’s PTS3 category. Taylor was faster on the bike and run than the race’s eventual winner, Daniel Molina (ESP), however, the lead that Molina built during the swim was too much to break down. Taylor took silver with a time of 01:09:51.

This race was a significant one for Hannah Moore racing in the PTS4 category. This was Moore’s debut at the World Paratriathlon Series and she got off to a great start. A 00:14:14 swim saw Moore exit the water in second place by some margin.

Moore continued her strong form, putting down the fastest bike section on the field by over a minute. Despite tough competition on the run, she secured a 3rd place finish, taking home bronze on her debut and sharing the podium with winner, Anna Plotnikova (RUS) and 2nd place, Sally Pilbeam (AUS).

George Peasgood made it two wins in two WPS races in the men’s PTS5 category. Peasgood led from the start and dominated the race in its entirety in a field that boasted the likes of Paralympic silver medallist and 2015 world champion, Stefan Daniel (CAN). Peasgood crossed the line in an incredible time of 00:59:24 and was joined on the podium by Daniel and Spain’s Jairo Ruiz Lopez.

Reflecting on his second WPS victory of the year, Peasgood said: “Coming off the bike I thought I would be hunted down by the quick runners, but it all came down to the last lap where I managed to hold off Stefan for the first time. To execute another great performance in the heat is such a bonus.” 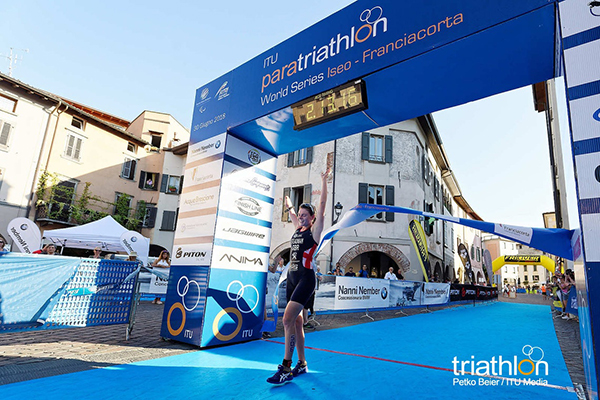 Above: Lauren Steadman takes her second WPS gold medal of the year.

Another British athlete won a consecutive gold medal too. Paralympic silver medallist, Lauren Steadman came out on top once again. Steadman stretched the field early, leaving the water more than 5 minutes ahead of her competition. She was followed out of the water by her compatriot, Claire Cashmore, who appeared on the 2018 WPS circuit for the first time.

Steadman didn’t let up on the cycle, extending her lead further with a 00:32:48 bike split. Whilst Steadman sealed her victory with a solid run, Cashmore was in a battle for 2nd place with France’s Paralympic bronze medallist, Gwladys Lemoussu. Cashmore remained resilient and secured a one-two podium for British athletes.

Steadman commented: “I’m really pleased to win another WPS in a good field. The weather was extremely hot but as a team we prepared ourselves properly. My racing is reflective of my training and I hope to continue bettering myself throughout the rest of the season.” 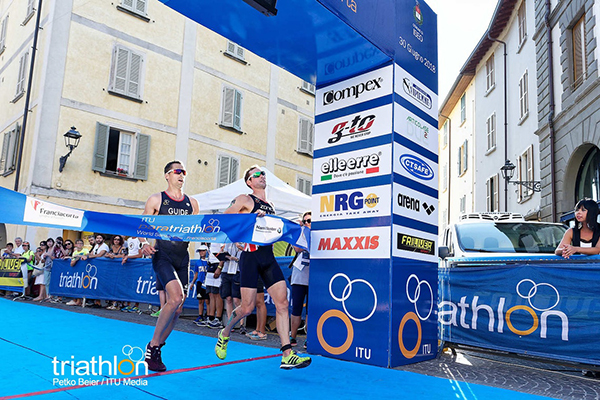 Above: Dave Ellis takes the tape.

Both of Britain’s athletes in the PTVI races excelled. In the men’s race, Dave Ellis was guided by Mark Buckingham to yet another victory. The men’s PTVI world champion took a lead of over two minutes across the swim. Despite Héctor Catalá Laparra (ESP) recording a strong bike split of 00:28:26, Ellis completed the race with a 00:16:38 minute run to top the podium yet again.

In the women’s race, Alison Peasgood was guided by Nicole Walters. Peasgood had returned to the WPS circuit after being absent for over a year through injury. The Paralympic silver medallist dominated the race, clocking the best times across all three disciplines and beating 2nd place, Susana Rodriguez by over a minute.

Following the race, Peasgood said: “It’s good to be back racing on the big stage. Nicole did a great job guiding. I’m really pleased to put a good race together in the heat.”

In incredible form, British athletes looked ahead to September’s 2018 ITU World Triathlon Grand Final on the Gold Coast. With defending champions, new contenders and ever-growing standards, the Grand Final was set up to be a phenomenal occasion for the sport and will be explored in a future edition of Swim, Bike and Rerun.