The World Paratriathlon Series began this year with the first of the three-race series taking place in Devonport, Australia. Michael Taylor (PTS4) was one of 70 paratriathletes to open a new decade of paratriathlon racing.

This was Taylor’s introduction to the World Paratriathlon Series (WPS) circuit after being added to British Triathlon’s World Class Performance Programme for 2020. The debutant was hoping to set a solid foundation to then build upon in the following events.

Setting off strongly, the PTS4 field was led by Taylor out of the water as he became the only athlete to complete the 750m swim in less than ten minutes. This allowed him a cushion for the next two disciplines and, as the likes of Russia’s Mikhail Kolmakov and Antonio Franko (CRO) put down strong times on the run, the two-time British national champion crossed the finish line less than 20 seconds behind Hideki Uda (JPN) to achieve a 4th place finish.

Devonport marked the first of this year’s three-race series. Athletes would have travelled to Yokohama, Japan in May had it not been for the disruption of the Covid-19 pandemic. For now, this event remains suspended but British athletes have enjoyed much success on this part of the circuit, and will no doubt be looking forward to returning when the time comes. 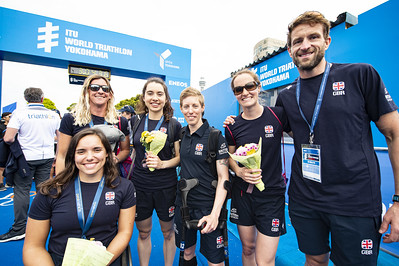 Above: The paratriathlon team following racing at Yokohama 2019

Yokohama has provided some excellent paratriathlon competition over recent years and many British athletes have showcased incredible performances.

In 2017, Alison Peasgood dominated all three disciplines to win gold in 01:07:19 and share the PTVI podium with her compatriot, Melissa Reid in 3rd place. The same year saw both Dave Ellis (PTVI) and Andy Lewis (PTS2) also take the top spot.

In the following year, Ellis was victorious once again as he beat out Jose Luis García Serrano (ESP) to take gold. 2018 was also a successful year for Lauren Steadman, who led a commanding victory of over two minutes from Grace Norman (USA).

A competitive PTS5 race for the men had George Peasgood hold off both Russia’s Alexandr Ialchik and Chris Hammer (USA) to take 1st place. 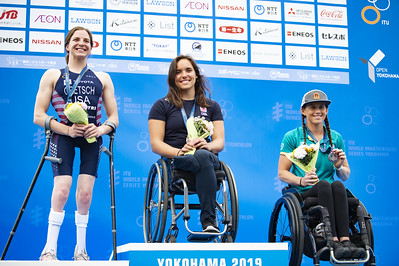 Above: Jade Jones-Hall celebrates gold medal at Yokohama in 2019

British success continued into last year’s event in which Jade Jones-Hall took home the gold medal after she finished half a minute faster than her American competition, Kendall Gretsch.

The final race of the circuit, and one that now has a new date of 3 and 4 October, is the Groupe Copley World Paratriathlon Series Montreal. Despite the season originally set to come to a close in June, this rescheduled event is sure to bring some heat to the Autumn.

2019 was the first year of the Groupe Copley World Paratriathlon Series Montreal and it proved to be a successful one for travelling British athletes. Taking home bronze medals that year were Jade Jones-Hall (PTWC) and George Peasgood (PTS5).

In the women’s PTVI race, Alison Peasgood secured silver guided by Nikki Bartlett, and Dave Ellis in the men’s equivalent won gold guided by Luke Pollard. It was also gold for Hannah Moore in PTS4, whilst Claire Cashmore and Lauren Steadman recorded an incredible one-two podium finish in the PTS5 category.

With a long break from World Paratriathlon Series action, the remaining two races of the series promise some of the most anticipated paratriathlon competition to date.