The 2019 Paratriathlon World Championships were hosted in Lausanne, with British athletes winning seven medals across the classifications.

The team’s first gold medal was won by Claire Cashmore as she took gold in the women’s PTS5 category. Lauren Steadman crossed the line three seconds later to finish second in the race and secure a one-two for Great Britain.

Steadman was the first of the Brits to complete the swim, leaving the water behind 2016 Paralympic champion Grace Norman (USA). Cashmore then battled back on the bike and run, passing both her compatriot and the American on her way to victory.

This was Cashmore’s first world championship title having finished second to Steadman in 2018, who she ran side-by-side with, before sprinting to victory.

On her win, Cashmore said: “World champion sounds absolutely incredible to me. I still can’t quite believe it. My swim was awful, and I got blown out the back and to be honest I didn’t think I had it in me and was beating myself up about it. 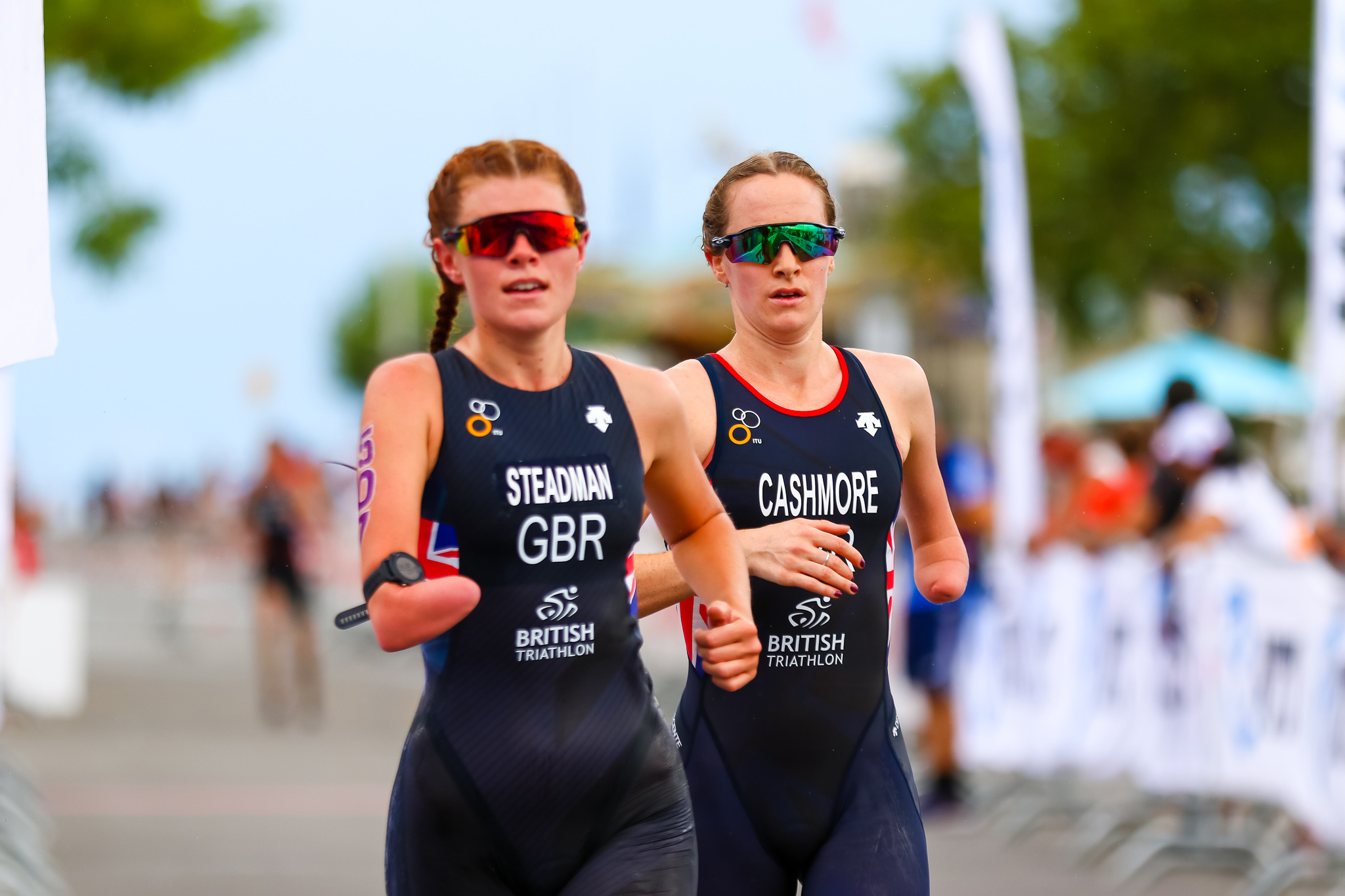 Above: Cashmore broke away from Steadman at the end to claim victory

“On the bike I just kept catching and I managed to catch Lauren. We went out onto the run together the whole way. It came to the final bit and I got my sprinting legs on and got to the finish.”

Also winning her maiden world championship was Fran Brown. Like Cashmore, the PTS2 athlete finished second in 2018 before making the jump to the top step on the podium.

Brown was over three minutes faster than anyone else on the bike, allowing her to create an unassailable lead that, despite the best efforts of the American pair of Allysa Seely and Hailey Danz, gave Brown the victory.

She commented after the race: “It wasn’t an easy race, but I enjoyed it. The support around the course was fantastic and it was brilliant to feel supported. It was a different course for us, but you can’t not be inspired by the location.

“The swim was great, and it was so nice to swim in the lake. I really enjoy the hills and the run was challenging but I enjoyed it. I was relaxed coming in to this and I think that really helped.”

Racing in the PTS2 men’s race was runner up from 2018, Andy Lewis, as he took world championship silver for the second consecutive year.

Defending her world title from 2018 was Hannah Moore, who dominated the women’s PTS4 race from the start.

Moore’s swim was the fastest by two-and-a-half minutes and there was no catching her from there. Racing the bike and run on her own, she won comfortably from Kelly Elmlinger (USA) in second. 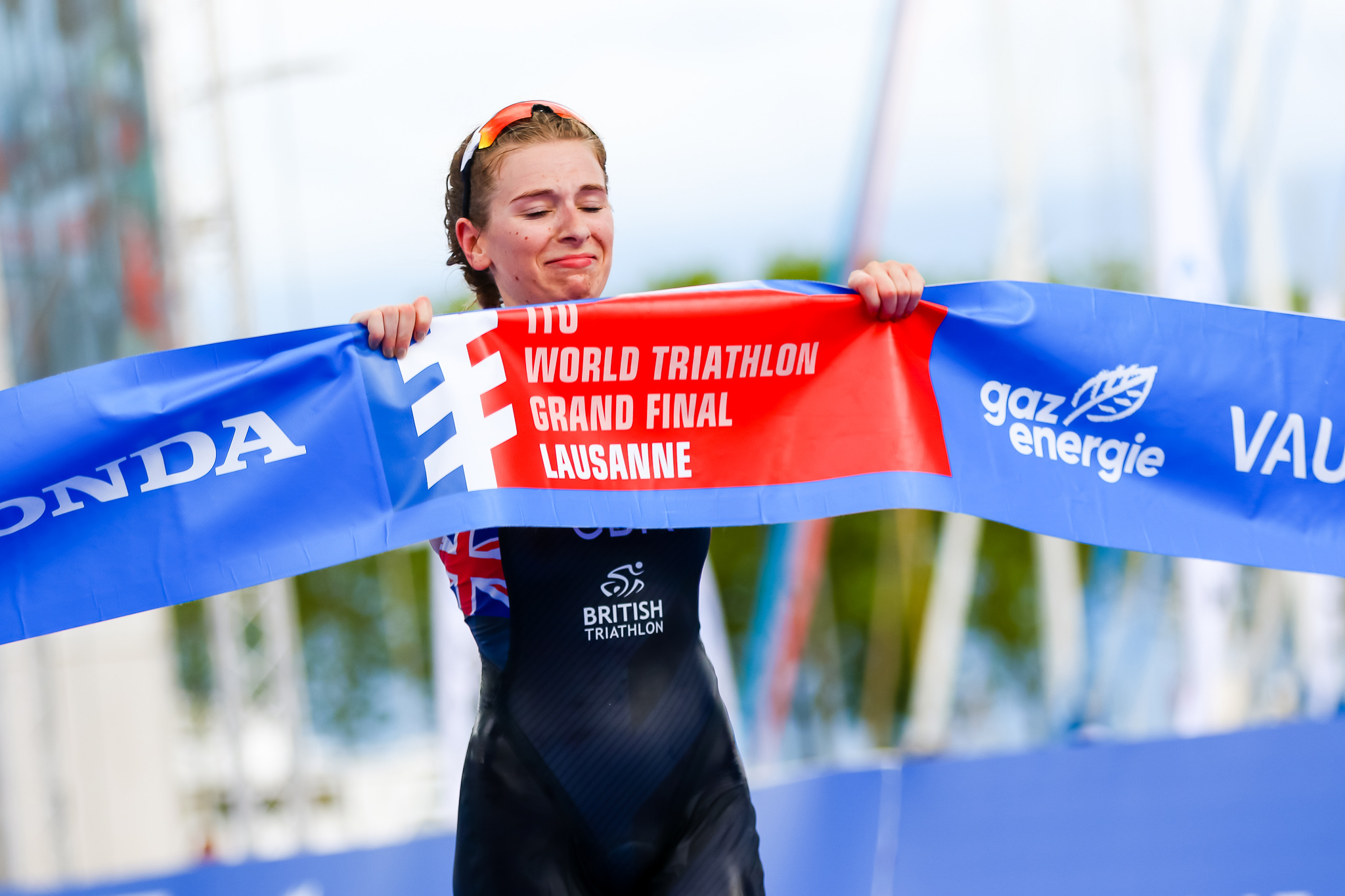 Above: Hannah Moore defended her title in Lausanne

Having become a two-time world champion, Moore said: “It was really tough out there today. The course is brutal to be honest. I hadn’t been feeling great, but I am so happy to have been able to get that win after that is fantastic. It’s down to the people around me.”

Dave Ellis (PTVI) and his guide Mark Buckingham secured the first medal of the day as they took silver. Having been racing in a strong position, the British pair suffered a mechanical issue on the bike which saw them fall back to seventh at T2.

Even the fastest run split of the race wasn’t enough for them to bridge the gap to Hector Catala Laparra (ESP) who took the gold.

Making it double-silver in the PTVI categories was Melissa Reid who crossed the line two minutes behind the winner alongside her guide, Nikki Bartlett.

Joe Townsend and Jade Jones-Hall both finished fourth in the PTWC races in Lausanne, whilst George Peasgood crossed the line 10th in the men’s PTS5 race. Steven Crowley (PTS4) recorded a DNF on the run.