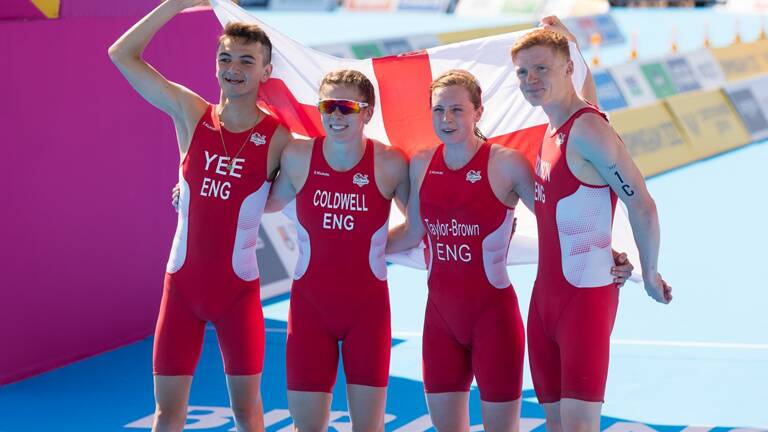 Paratriathlon made a triumphant return to the Paralympic Games at Tokyo 2020 with debuts and gold, silver and bronze medals won. Team Europe were also victorious at the inaugural Collins Cup and Brits took to more middle distance racing on the international stage this weekend.

Two days of Paralympic paratriathlon resulted in gold for Lauren Steadman, silver for George Peasgood and bronze for Claire Cashmore.

The racing began with a tough opening day for British athletes as Michael Taylor (PTS4), Fran Brown (PTS2) and Dave Ellis (PTVI) guided by Luke Pollard all made their paratriathlon debuts for ParalympicsGB.

The debutants were joined on the start line by Melissa Reid (PTVI) guided by Hazel Macleod and Alison Peasgood (PTVI) guided by Nikki Bartlett, who returned to the Games after their debuts in Rio resulted in bronze and silver medals respectively.

Taylor and Brown set off first, crossing the line in 8th and 4th place respectively. This was then followed by the PTVI racing that saw Ellis’ race cut short due to a technical issue on the bike, Reid cross the line in 7th and Alison Peasgood sprint to a 4th place finish just behind Annouck Curzillat (FRA).

The second day of racing saw three British PTS5 athletes take on the swim, bike, run as Lauren Steadman improved on her silver at the Rio 2016 Paralympic Games to take the tape at Tokyo 2020. There were also medals for George Peasgood and Claire Cashmore who took silver and bronze in their respective races.

Half of the races were won by Team Europe athletes, with Lucy Charles-Barclay, Emma Pallant-Browne and Kat Matthews all taking the tape. Britain’s Joe Skipper and Holly Lawrence also racked up the points tally with podium finishes.

Following the Collins Cup in Samorin, Slovakia, the Challenge Family middle distance championship event welcomed athletes to race across a 1.9km swim, 90km cycle and final 21.1km run. It was Great Britain’s Lucy Hall that took the tape after a strong performance in the water and on the bike.

Tara Grosvenor added another top ten finish to her achievements this year following IRONMAN Finland. Grosvenor began the race in a strong position, laying down a fast time on the swim. This foundation saw her cross the line in 7th place with a finishing time of 04:51:26.