Cozumel, Mexico played host to the 2016 Grand Final with Britain hopeful of success in the World Triathlon Series, U23, Junior and Age-Group races.

Britain’s three medallists from the Rio 2016 Olympic triathlon, Vicky Holland and Alistair and Jonathan Brownlee, all headed to Cozumel for the Grand Final that year, with Jonathan Brownlee in contention for overall victory in the World Triathlon Series (WTS).

Heading into the race, Jonathan Brownlee knew that a win and a fourth place or below finish for Mario Mola would be enough to secure him the overall title. It was with this in mind that he set out and was at the front of the race from the beginning.

Above: Highlights of the men's race, with Jonathan Brownlee seeking victory on the overall series.

Part of the leading group coming out of the swim, both Brownlees set the pace on the bike leg. Such was the pace that their group entered T2 80 seconds ahead of the chase group which contained Mola.

Seeking to ensure he was on the top step of the podium for the race to give him the chance of topping the overall standings, Jonathan pulled away with his brother and Henri Schoeman of South Africa in tow.

One last break and Jonathan was free from the other two. Eating the ground in from of him, he was set to claim the win until, with 400m to go, fatigue and disorientation set in.

Above: Jonathan and Alistair chat to Good Morning Britain about Cozumel.

With Schoeman passing him, elder brother Alistair gave one of the most memorable sporting moments as he took Jonathan by the arm towards the finish line.

Throwing his brother over the line in front of him to finish second, Alistair had done all he could to help his brother to safety and the title. Sadly, it wasn’t to be, with Mola crossing the line in fifth to win the 2016 World Triathlon Series by four points.

In the women’s race, Britain’s overall medal hopeful, Jodie Stimpson who sat third in the standings, was unable to compete in Cozumel having not recovered from the Achilles injury that forced her to pull out of the race in Edmonton.

Above: Helen Jenkins claimed fourth as Flora Duffy won the race and series in Cozumel.

The final race of the series would be a shootout for the overall title between Flora Duffy (BER) and Gwen Jorgensen (USA). British interest in the race was still high however, with Jessica Learmonth, Lucy Hall, Vicky Holland, Non Stanford and Helen Jenkins all racing.

In fact, it was Hall and Learmonth who, along with Duffy, led out of the swim and pulled away on the bike to have over a minute’s lead in the race. As Duffy pulled away, breakers from the chase pack including Jorgensen and Jenkins passed the two Brits on the run.

Duffy had too much of a lead to be chased down and claimed her maiden World Triathlon Series title with Jorgensen taking second in the race and series.

Charlotte McShane (AUS) pipped Jenkins to the finish line to take third in the race in what would prove to be the Brit’s final race before taking a break to start a family, with her fourth place finish enough to give Jenkins a top-5 finish overall and the highest British finish in the final 2016 standings. 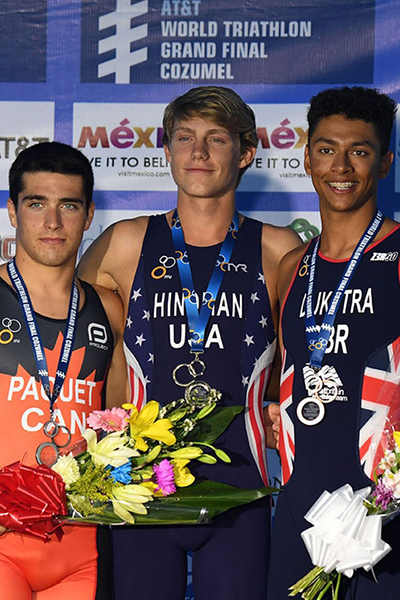 Above: Dijkstra claimed bronze in the Junior race.

Away from the World Series racing, some of Britain’s best future performers were also racing in Cozumel. Many of today’s well-known athletes took to the course in Mexico in the U23, U23 and Junior races that year, hoping to build their experience of international racing.

Gordon Benson, Grant Sheldon, Georgia Taylor-Brown (all 22) and Sophie Coldwell (21) all represented Britain before going on to race on the World Triathlon Series in years to come. Taylor-Brown and Coldwell finishing fourth and sixth in Mexico respectively.

In the Junior races were teenagers Sam Dickinson, Ben Dijkstra, Alex Yee, Olivia Mathias, Sian Rainsley and Kate Waugh. Dijkstra claimed the bronze medal as he finished four seconds ahead of Yee who took fifth. Waugh (11th) placed highest of the women as she finished just outside the top-10.

Above: Waugh, Dijkstra, Mathias and Johnson teamed up for Great Britain in the mixed relay.

Rounding off the elite racing from Cozumel, the U23 Mixed Relay saw Waugh, Dijkstra, Mathias and Calum Johnson team up to take second place and gain a lot of relay experience at the same time.

Also making the trip out to Mexico were 424 members of the Great Britain Age-Group Team to race in the sprint and standard distance World Championship races.

Above: 424 members of the Great Britain Age-Group Team also headed out to Cozumel in 2016.

Ahead of all the triathlon racing in Cozumel was the Aquathlon World Championships which featured elite, u23 and age group racing. Off the back of winning gold in Rio, Alistair Brownlee claimed the victory in the men’s elite run-swim-run race, beating four-time World Champion Richard Varga (SVK) into second.

Natasha Sinha (F16-19) and Michael Smallwood (M70-74) won gold for the Age-Group Team as part of a twelve-medal haul. This was the first of Smallwood’s two medals, with Sinha now part of the British Triathlon Pathway as part of the Leeds Performance Centre as an U23 athlete.

Jonathan Brownlee came second in the overall series and Alistair won two of his four WTS races, with three different British women winning a race on the series.